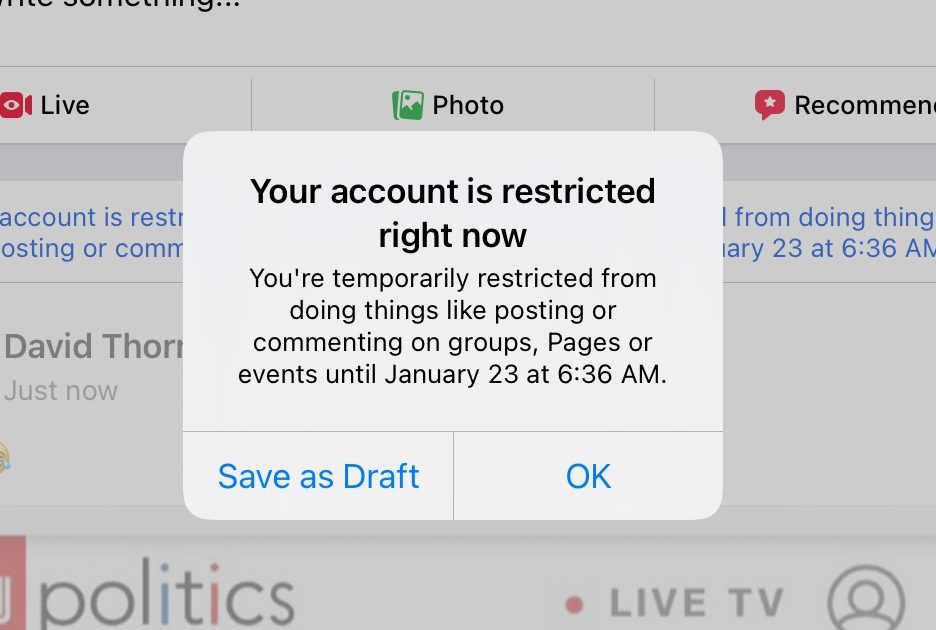 Friday afternoon, people on Facebook started getting upset. Users were seeing their access to groups restricted to block posting and commenting. As it turned out, I was one of those users.

I opened Facebook like normal and posted one of our Racket links to a political group that I’m in. Then I laughed briefly at a friend’s post on my newsfeed. The lady, who has a lot of cats, had posted that she was restricted and I jokingly commented, “I didn’t know cat pictures were against the Terms of Service.” Afterward, I tried to post in another group and got the message below.

I knew that I had not posted anything bad so my thoughts turned immediately to the inauguration. This morning my suspicions were confirmed when the woman that posted the restriction shared a link to a blog post by Facebook titled “Our Preparations Ahead of Inauguration Day.”

The blog post explains that Facebook is taking two broad measures ahead of the inauguration. The first is to block “the creation of any new Facebook events happening in close proximity to locations” where events associated with the inauguration will take place. The company says that it is also “conducting a secondary review of all Facebook events related to the inauguration and removing ones that violate our policies” as well as “continuing to block event creation in the US by non-US based accounts and Pages.” The second measure is “restricting some features for people in the US based on signals such as repeat violations of our policies.”

It is the second measure that is causing consternation among Facebook users. Another lady I know thought that she had been banned for posting a Bible verse since that was her last post before she was notified of the restriction.

To be clear, the restrictions are not a ban and they are not necessarily related to any recent violation of the Terms of Service. Affected users can still post on their own wall and the walls of their friends. They just can’t create or comment on posts in groups, Pages, or events. And even that restriction is not complete. I set up posts for two pages that I admin, the Racket News and the Common Sense Conservative, and those posts were published as normal.

The restrictions seem to target people who have been in trouble with Facebook moderators before. A few days ago, I described a couple of run-ins that I have had with the platform’s moderators so I clearly fit this description even if it was unintentional.

However, I’ve also heard from some restricted Facebook users who say they’ve never been in trouble for violating the Terms of Service. While these claims are impossible to verify and may represent selective memory, it is likely that other triggers for restrictions are at play as well. The “such as” qualifier in the Facebook post is a tell that there are other triggers for the restrictions.

It is worth noting that the restrictions seem very broad and not focused on conservatives. I can still visit various groups and I’m seeing lots of new posts in pro-Trump groups while some liberals and Trump critics are reporting that they are restricted. The new restrictions do not fit the narrative of an attempt to silence conservatives (or Republicans or Trump supporters). In fact, one of the new posts that I saw this morning in a conservative group perpetuated the stolen election myth, although it did not use the “Stop the Steal” phrase.

Even though the Facebook restrictions seem to be overly broad and impact me personally (and for no good reason, I might add, since my posts usually call for unity and peace while debunking conspiracy theories and lies), I maintain my previous position that Facebook is within its rights to set its own standards and enforce them as it sees fit. There is no constitutional right to post on Facebook or Twitter.

And Facebook’s actions are not without cause. There is a growing body of evidence that the Capitol insurrectionists used social media and other websites to plan the attack in the weeks before January 6 as well as for relaying tactical information such as routes to take to avoid police or how to pry open doors. Facebook was among the platforms that were used.

And the danger is not over. Right-wing (I’m not going to call them “conservative”) groups are planning additional “armed march[es}” over the next week.

It’s also important to remember that restrictions, especially those with a defined end date, do not necessarily equal tyranny. That’s especially true when the restrictions are rules imposed by a private company with numerous alternatives. I’ll add that the people who have asked for a more equitable application of Facebook rules seem to be getting their wish here.

The lesson here is that freedom requires responsibility and people are held accountable for their behavior. When freedoms and privileges are abused by some, especially in a violent manner, it often leads to restrictions on people who have done nothing wrong. This is unfortunate but often necessary.

That’s something to consider going forward as well. Many states have enacted liberal (meaning “lightly regulated”) gun laws that allow open carry and concealed carry. If these laws are abused and lead to violent protests, they could easily be replaced with more restrictive gun laws.

I, for one, would hate to see that.