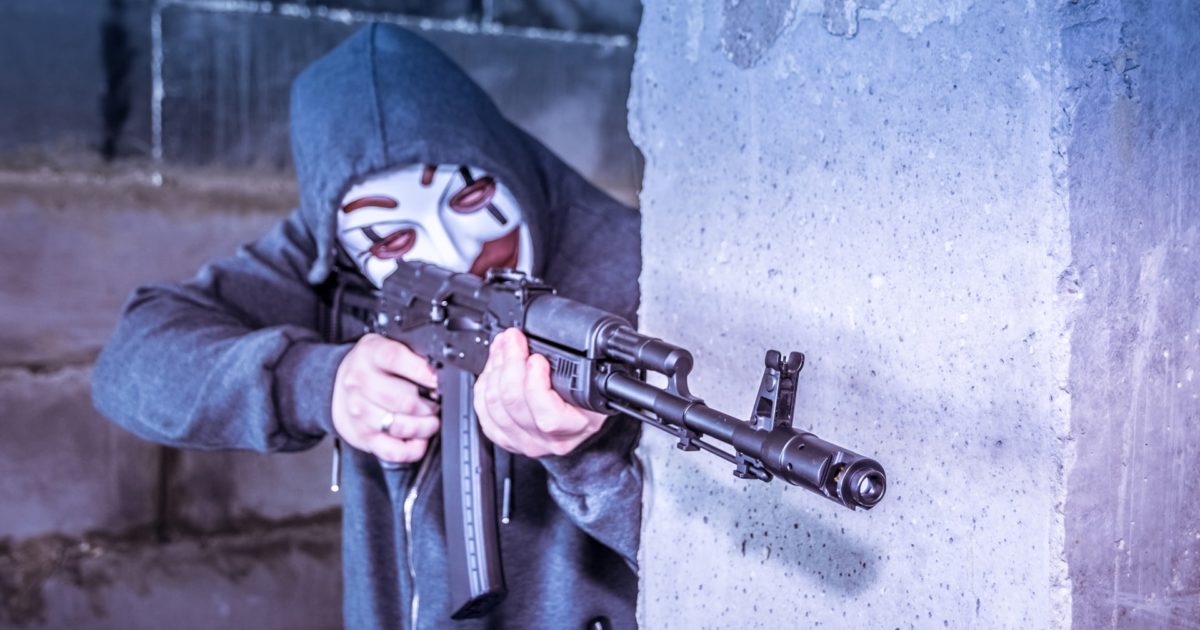 A common theme lately is that conservative accounts are being purged from Facebook and Twitter. The recent wave of bans has many on the right decrying the attacks on the freedom of speech and censorship by the social media companies. My experience as admin of a conservative Facebook page tells me that the truth is not so simple.

When I looked up the most popular political Facebook pages in the United States, I found that the top 10 was dominated by right-leaning pages. Here is the list according to SocialBakers.com:

If you ask me, it’s pretty hard to make a case that you are being censored and have no freedom of speech when nine of the top 10 Facebook pages represent your side of the ideological spectrum. (The veterans page is the only one that I wouldn’t consider a right-wing political site.)

But Dave, you might argue, those are old numbers. Those pages have probably been banned and deleted by now. In reality, the only one of the pages on the list that is no longer accessible is the Trump campaign page. The fact that these sites are the largest sites on Facebook also undercuts claims of shadow banning.

If we trot on over to Twitter, Social Bakers also has data for political tweets. The most popular accounts in the US are:

There is a bit more liberal competition on Twitter, but Donald Trump still has two accounts in the top three (or did until last week). Again, Trump’s personal account is the only one that is not accessible. As I write this, I was even able to see the @POTUS account.

So why do so many people on the right believe that their freedom of speech is under assault and their views are being suppressed? I think there are a several reasons, all of which play a role.

First, people on the right are being told that there speech is under attack. In their bubbles of confirmation bias, right-media, pundits, and politicians are telling folks that they are being censored and they take it for granted that those claims are true. Like the classic example of everyone hating Congress but voting to re-elect their representatives, people think that MY speech isn’t being censored but apparently everyone else’s is.

As a result, many on the right have suppressed themselves by packing up their Twitter and Facebook accounts and setting off for the greener pastures of Parler, MeWe, or wherever. If you move your social media presence from a big platform to a smaller one, you are going to lose some of your reach.

Second, right-wing social media users bring down a lot of heat on themselves. I cannot tell you how many times I’ve seen people in conservative groups post inflammatory content with a caption like “I’ll bet this gets me zucked.” If you push – or flout – the boundaries of the Terms of Service, you are going to have problems.

I can testify to the truth of what I’m saying. I’ve administered a conservative Facebook page, The Common Sense Conservative, for more than a decade. In that time, I’ve only had a couple of posts removed and been subjected to only one 24-hour ban. At the same time, I’ve had friends in other conservative groups who go from one ban to another like Otis Campbell coming and going from the Mayberry jail.

I think that the difference is that I attempt to keep my page clean and civil. I publish memes that are funny but tend to steer clear of those that are simply insulting. I don’t do obscene, profane, or sexual content.

The one meme that I can remember having removed was one that showed “genders” and showed the male and female symbols above another label that said “mental disorders’ with the nonbinary gender symbols. You can see the meme here.

While I disagreed with that decision, I disagreed with my ban more. Facebook told me that I had violated their standards, but didn’t tell me which posts had done so. I appealed and their decision was upheld.

My real problem here was the lack of clarity. It would be nice to know how I ran afoul of the moderator algorithms. That might help me to avoid similar problems in the future.

But, as I wrote a few weeks ago, the decision is ultimately Facebook’s to make. If I don’t like it, I can vote with my feet… err, keyboard, and go post on Pinterest or LinkedIn or Instagram. I don’t have a constitutional right to make myself heard on Facebook.

The third problem is that we have dumbed down and expanded the phrase “conservative” so that it is almost meaningless. “Conservative” has become synonymous with “Republican,” but the two have different meanings. That is especially true these days.

The definition of “conservative” is “averse to change or innovation and holding traditional values.” In the political context, it means “favoring free enterprise, private ownership, and socially traditional ideas.” If you disagree with these definitions, your complaint is with Google, not with me. Word definitions are objective, not subjective.

In contrast, “Republican” is a partisan adjective. Some Republican people, policies, and ideas can be described as conservative and some cannot. While there is overlap, the two words describe different ideologies. You may have noticed that I’ve frequently used the term “right-wing” in this piece rather than “conservative,” and that is why.

A lot of what passes for conservative thought these days is really Republican or anti-left. Again, there is overlap, but there is a difference between advocating for limited government, free market, constitutional ideas and advancing Republican ideas that are sometimes at odds with the Constitution and traditional conservative principles. (Does any real constitutional scholar believe that the Framers intended to give the vice president veto power over the Electoral College?) A lot of “conservative” content is nothing more than attempts at “owning” the left.

Many – or possibly even most – of the people of the who have been banned are not conservative in either sense of the word. Before the Capitol attack, one of the biggest social media controversies I can remember was when Alex Jones was banned from Twitter in 2018. Jones is a conspiracy theorist rather than a conservative, but he was defended by many conservatives.

There is nothing wrong with defending people who don’t share your beliefs. John Adams famously defended British regulars accused of murder in the Boston Massacre trial, and I agree with Voltaire’s sentiment that “I disapprove of what you say, but I will defend to the death your right to say it.”

But the difference here is that Alex Jones still has the right to espouse his conspiracy theories about gay frogs or whatever. He still broadcasts his conspiracies today. On his own websites.

A lot of well-meaning people these days are confusing freedom of speech with access to social media. No one is preventing people like Alex Jones from speaking, but social media companies don’t have any sort of legal or moral duty to allow people access to a privately-owned megaphone or podium.

That’s the case with the post-insurrection bans as well. When I look at some of the examples of posts that have gotten people banned on Twitter and Facebook or that were cited in Amazon and Apple’s abandonment of Parler, I don’t think, “This is conservative speech that must be protected.” I think, “This is a cesspool and the people behind these rantings are either evil or seriously unwell.”

As I’ve noted before, it’s pretty ironic to be able to have an argument about censorship on the very platform that is accused of being the censor. The very fact of the discussion is proof that the claim is wrong on its face.

I can go on Facebook and say, “Mark Zuckerberg is against the freedom of speech.” On Twitter, I can say, “Jack Dorsey is wrong to ban tweets.” What I cannot say is something along the lines of “Jack Dorsey and Mark Zuckerberg should be killed for their violations of free speech.” Criminal conspiracies and threats are not protected speech.

Threats and plotting to break the law should not be permissible speech on any platform and that is what many of these people were doing. Other claims, such as the lie that the election was stolen, were also provoking violence and were legitimately removed.

People like Sidney Powell, Lin Wood, and Donald Trump who advanced the lie about the election violated the Terms of Service, especially where they promoted violence. In Twitter’s view, Trump’s tweets were a “violation of the Glorification of Violence Policy.”

And Twitter owns the platform. It’s their call, just as making decisions about behavior in your house is your call.

Lin Wood went even further, tweeting as the riot occurred, “There will not be another chance… TODAY IS OUR DAY!”

This was not a conservative political tweet. This was a call to war.

I’ll stipulate that the social media companies should do a better job of policing violent speech from the left, but that is a different argument. I’m not going to agree to the notion that the right should be allowed to post death threats and calls to violence just because some on the left do it and get away with it.

My recommendations going forward are that conservatives should self-police their own movement. We should not line up behind conspiracy theories or people who tickle our ears with things that we like to hear. We should be careful who we align ourselves with because association with bad and crazy people undermines the credibility of the entire conservative ideology, not to mention the Gospel.

Second, we need to recognize the difference between speech and access to private platforms. If you aren’t being prevented from speaking or typing your message by the government, your rights are probably not being infringed.

If we try to force social media companies to carry a particular user, then we make the same error that the left made in trying to force bakeries to make same-sex wedding cakes. The right does not have the legal or moral authority to bend private businesses to its will any more than the left does.

It doesn’t matter that the social media companies are impersonal, large corporations that generate less sympathy than bake shop owner. The facts are the same, regardless of how they make you feel.

Finally, the Christian, self-proclaimed-conservative, “law and order” crowd should be modeling civility online rather than insurrection. A lot of the people I know who went to Parler were Christians. One used to be my pastor. Yet what I see from Parler – and “conservative” groups on Facebook – is some very unchristian, unconservative conduct.

The anonymity of the internet makes people do things that they wouldn’t normally do. At least, I hope they wouldn’t act that way in real life. In that way, it’s similar to being part of a mob.

We need to remember that there are real, living people who are created in God’s image on the other side of our keyboards. If you wouldn’t say things like “hang that n—r” in real life – and you shouldn’t – then you shouldn’t be saying it online.

A good rule of thumb is to remember what your mom probably told you when you were growing up: Jesus is always watching. If that doesn’t work or if you don’t believe in Jesus, just remember that the FBI is watching as well.