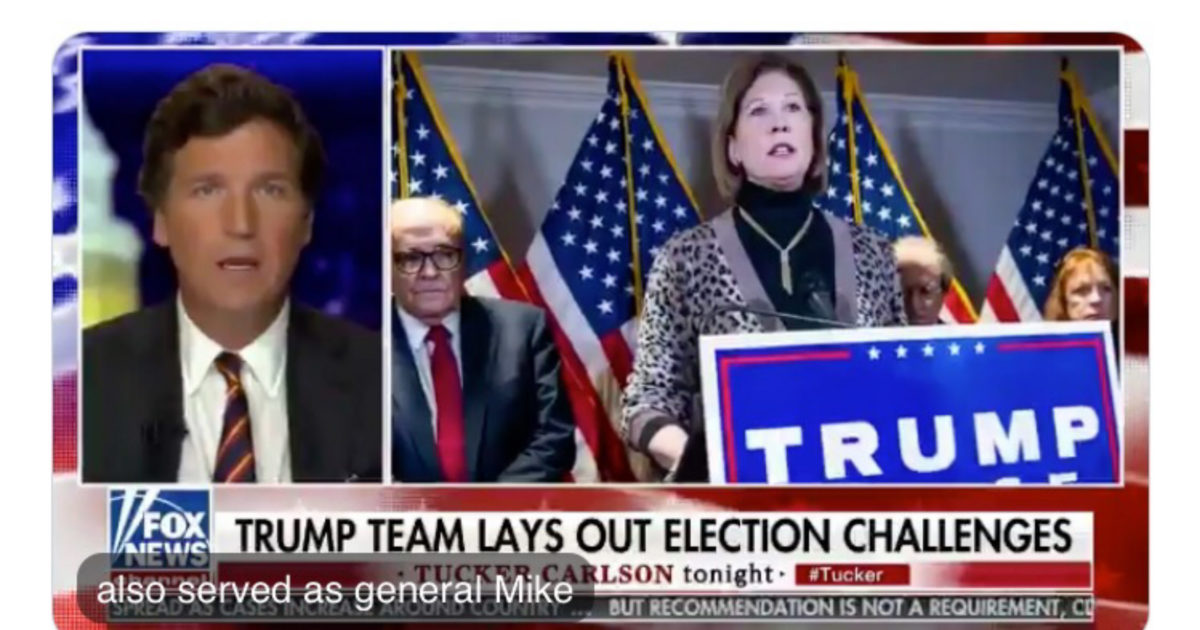 For much of the past four years, Republicans have been near-unanimous in their support for Donald Trump. Now, however, as the debate rages over the president’s allegations of widespread election fraud, one of Mr. Trump’s staunchest allies in the media is questioning the claims made by Trump campaign lawyers.

We all know Tucker Carlson, host of the highest-rated primetime cable news show. On his show, Carlson has been a strong supporter of President Trump since its debut in 2016. His longstanding loyalty to Trump what makes Carlson’s strong words for Trump campaign attorney Sidney Powell so surprising and important.

“For more than a week, Powell has been all over conservative media with the following story,” Carlson said in a segment called “Standing Up For What’s Right” on Thursday night. “This election was stolen by a collection of international leftists who manipulated vote tabulating software in order to flip millions of votes from Donald Trump to Joe Biden. The other day on television, Powell said of Trump that when the fraud is finally uncovered, ‘I think we’ll find he had at least 80 million votes.'”

“In other words,” Carlson continued, “rigged software stole about seven million votes in this election.”

Carlson then plays a clip of Powell at a press conference with Rudy Giuliani in which she claimed to have discovered an algorithm with the ability to “flip votes.” Powell says this algorithm “probably ran all over the country” and added that “we might never have uncovered” the software “had the votes for President Trump not been so overwhelming in so many of these states that it broke the algorithm.”

“Sidney Powell has been saying similar things for days,” Carlson said, resuming his commentary. “On Sunday night, we texted her after watching one of her segments.”

“What Powell was describing would amount to the single greatest crime in American history,” he continued. “Millions of votes stolen in a day. Democracy destroyed. The end of our centuries-old system of self-government. Not a small thing.”

“We took Sidney Powell seriously,” Carlson said. “We had no intention of fighting with her. We’ve always respected her work.”

But Carlson had questions about Powell’s claims.

But there was a problem.

“She never sent us any evidence despite a lot of requests, polite requests,” Carlson said. “Not a page.”

“When we kept pressing, she got angry and told us to stop contacting her,” he added.

“When we check with others around the Trump campaign, people in positions of authority, they told us Powell has never given them any evidence either,” Carlson continued. “Nor did she provide any today at the press conference.”

“She never demonstrated that a single actual vote was moved illegitimately by software from one candidate to another,” he went on. “Not one.”

“So why are we telling you this,” Carlson asked rhetorically. “We’re telling you this because it’s true. And, in the end, that’s all that matters: The truth. It’s our only hope, it’s our best defense. And it’s how we’re different from them, we care what’s true. And we know you care too, that’s why we told you.”

“Maybe Sidney Powell will forward soon with details on exactly how this happened and precisely who did it,” Tucker speculated. “Maybe she will, we are certainly hopeful that she will.”

I have had my differences with Carlson over the years, but I am grateful for his decision to tell the truth about Powell’s claims. I’m sure it was not an easy decision and Carlson admitted as much the following day when he said that he had “heard from a lot of people,” including people in the Trump Administration, since the original segment aired.

In his update, Carlson says that he, along with the people who called his show, believes that the election was “not fair” and that he is “willing to believe any explanation for what happened,” but that he has still “not seen a single piece of evidence showing that software changed votes.”

“It doesn’t mean it didn’t happen, it might have happened,” Carlson said. “It means they haven’t seen any evidence that it happened.”

Carlson goes on to say that other members of the Trump legal team and the Trump Administration have also not seen evidence of Powell’s claims, but adds that Powell now says that she expects to be able to prove her claims in court within the next two weeks.

So save the date. The election is already two weeks past and the Trump campaign has been claiming fraud almost since Election Day. Yet, as I pointed out earlier this week, Rudy Giuliani admitted in court that the Trump campaign was not making legal allegations that fraud had been committed in Pennsylvania. However, if Powell’s statement is accurate, we can look forward to evidence by December 5. Mark your calendars.

There’s an old saying that extraordinary claims require extraordinary evidence and Tucker is right that Powell’s allegations, if true, would constitute the greatest crime in American history. The American people should not be expected to take allegations about unprecedented voter fraud purely on faith. Powell should present her evidence to the country rather than making extraordinary allegations that she is not willing or able to back up. There is another old saying that applies as well: Put up or shut up.

I disagree with Carlson that the election was unfair. I have yet to see any evidence of widespread fraud that could have shifted the outcome of hundreds of thousands of votes across five states. In my opinion, Donald Trump’s loss can be easily explained by a number of factors, including the pandemic and its associated recession, but especially the fact that President Trump spent four years playing to his base at the expense of alienating moderate and independent voters.

A big part of Republican surprise at the outcome of the election is that we live in different media bubbles. In the Republican media bubble, we were told for four years that Donald Trump was the greatest and most popular president in history. In reality, his average approval rating never approached 50 percent, which goes a long way towards explaining the outcome of the election. I applaud Tucker Carlson for breaking out of the bubble now to tell his audience the truth about the fraud allegations.

Maybe there is evidence of widespread election fraud. If there is, I’d love to see it so that I can examine the claims objectively. The will of the people in the election should be honored regardless of which candidate won.

But if Powell and the Trump cannot support their allegations, we need to know that too. Hopefully, when the matter is settled, the American people will remember who lied to them and who told them the truth, because trying to overturn an election based on fabricated claims of fraud is just as bad as doing it with a software algorithm.