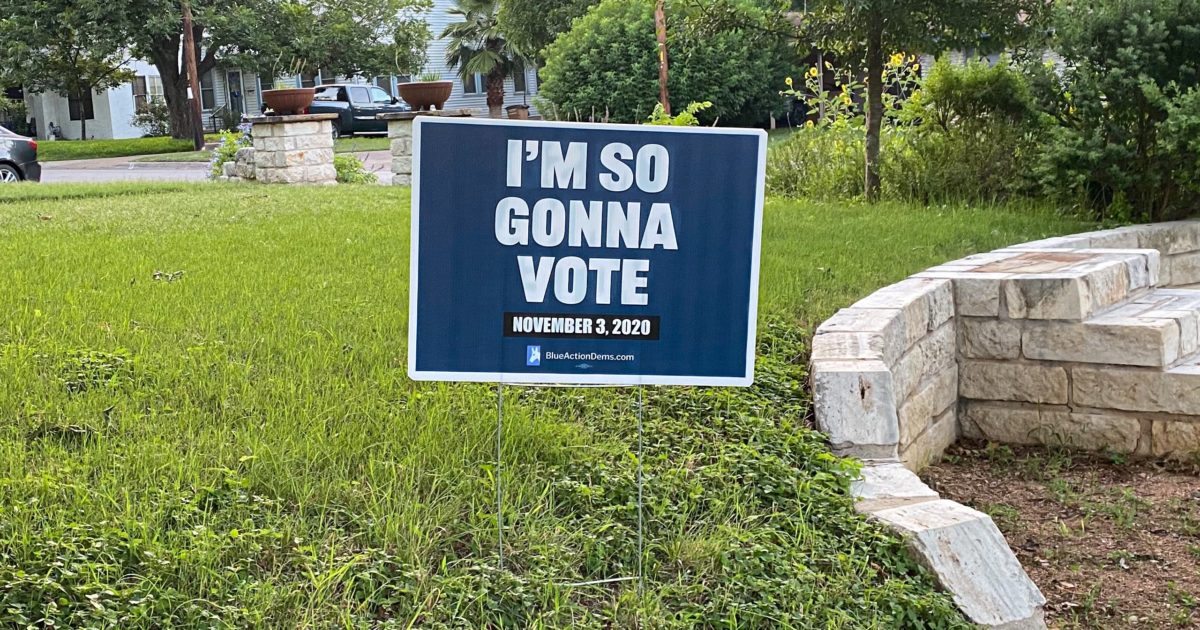 There are two narratives the media is pushing the day after the final presidential debate. First, that there’s a “massive Democrat early-vote lead” in swing states, and second, there are not enough votes left for Trump to win. Both narratives are false.

By the time of last night’s debate, somewhere between 42 and 50 million votes have been cast. According to The New York Times, that’s about 30 percent of the total votes from 2016.

So what do all of these early votes tell us about the state of the race? We are quite likely headed for record-breaking turnout, a dynamic we’ve seen in elections throughout the Trump era (the 2018 midterms had the highest-percentage turnout in a century). As in those past elections, much of the vote is powered by Democratic enthusiasm.

This is basically wish-casting. Certainly, many motivated anti-Trump Democrats went out early and cast their votes in person, or mailed in votes. The narrative here is that Trump’s “mail fraud” attack line is the motivator for Trump supporters to vote in person. The evidence they cite is a single study.

A Pew Research study in September showed that 70 percent of Republicans think fraud is either a major or minor problem; 43 percent thought it was “major” and the difference is where people got their news.

It seems to me the media has pivoted to their own version of voter suppression. Despair, and give up, because Trump has already lost, they say. Umm, no.

Many more people are motivated by their own political and social beliefs, like having a job, or paying for health care, than by some theory that Democrats will rig the election by mail. Joe Biden made a terrible blunder during the debate when he admitted he would “transition the country” away from fossil fuels. This is essentially the Green New Deal, and it will motivate many swing state voters who haven’t decided whether to vote, to go out on Election Day and vote for Trump.

Let’s be real: Biden’s expectation bar was to show up while not drooling on himself. He met that bar easily. But he did not meet the challenge of responding to credible, corroborated accusations of foreign influence by China, possibly offered a 10 percent stake in a Chinese company involving his son Hunter. He called it “malarkey.”

Biden’s plan of how to handle coronavirus was to do essentially what the Trump administration is doing, but it would be him doing it, not Trump. For voters who are motivated by not having Trump as president, that’s plenty of reason to vote for Biden. For voters who planned to stay home, it’s a reason to think about going out and voting for Trump.

Democrats have fired their volley. They’ve shot their wad and have no dry powder to reload and fire another. There will be no 10-day wave of Democrats, but the so-called “risky” strategy of Trump to produce a “red wave” has more chance of happening based on the debate performance by both candidates.

Biden’s milquetoast answers on coronavirus, his word salads on foreign influence, and his fossil fuel double-down are helping the Trump campaign to find those voters who can win the election.

“Basically what he is saying is he is going to destroy the oil industry,” Trump said. “Will you remember that Texas? Pennsylvania? Oklahoma? Ohio?”

Watch the polls begin to swing in these swing states.

Joe Biden, the Commission on Presidential Debates, and Kristen Welker did Trump a tremendous favor last night. By forcing order on the president, they kept him from spinning out of control. He appeared quite in control of himself, while Biden appeared as he usually does.

When the polls swing, the media will have a myocardial infarction. That will find even more voters to go out and vote for Trump on Election Day. The election will be decided on November 3, even if we don’t know the results right away.

This may be the closest election since 1800, when Aaron Burr lost in the House of Representatives to Thomas Jefferson.