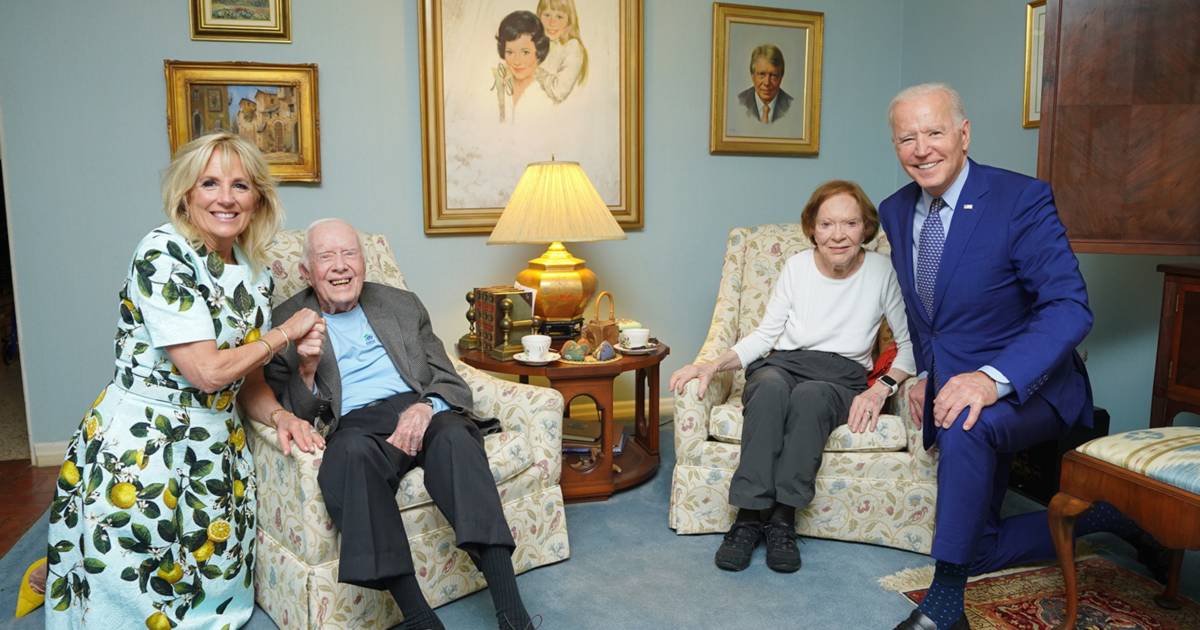 One day you’ll be old, and someone will take your picture, mkay?

This is one of those “what the h-e-double-l” moments I see on social media where well-known people who should know better lose their minds and their respect. If you haven’t seen the picture of the Bidens visiting the Carters, here it is:

You’ll notice that the Carters look, umm, little, and the Bidens look like giants. There’s a very good explanation for this, dealing with photography, and small spaces. The home in Plains where the Carters live is no mansion—it’s a typical south Georgia home with small rooms filled with furniture, wall hangings and knick-knacks.

The Carters have never owned another home, and have lived in this one (with the exception of Jimmy’s military service, his stint as governor of Georgia, and of course, his four years in the White House) since 1961. When the photo was staged, the photographer faced a dilemma: How to get a useful photo in a tiny space, with all four subjects in frame.

Though, as we age, we tend to look smaller, Jimmy Carter is only two inches shorter than Joe Biden, and Rosalynn Carter is just an inch shorter than Jill Biden, so there’s no real size difference. The fact that Joe is paired with Rosalynn, and Jill with Jimmy highlighted the size differences, along with the sitting/kneeling pose. But the rest is an optical illusion. Yahoo News explains:

The likely explanation is that the photographer used a strong flash and a wide-angle lens to capture the group in a tight space, and created an optical illusion in the process.

“Although President Biden is kneeling much farther in front of Rosalynn Carter, the flash reduces shadows, a key part of what allows objects to have depth,” the Washington Post explained. “The resulting effect is that Biden and Rosalynn Carter appear to be side-by-side on the same plane.”

On images shot with a wide-angle lens, perspective appears to be exaggerated: Nearby objects may look much bigger (and hence nearer) than they really are, and faraway objects look even smaller and further away. This effect also amplifies distances between objects, i.e., things look further away from each other. The shorter the focal length, the bigger the perspective exaggeration effect. The perspective exaggeration effect is why wide-angle lenses are not ideal for shooting portraits or any other subject where it is important for the shape of the subject to be faithfully captured.

If you look at the chair in the foreground to the right of President Biden, you’ll notice it’s huge compared to the chair Jill Biden is sitting in, and you’ll also notice that the chairs at the bottom form a curved circular shape. This is due to the deformity created by the lens and perspective.

It’s not the best picture in the world, but it’s likely the only one we’ll see of the 96-year-old Carter and the current president together. Yet, the blue checkmark folks on Twitter have decided to mock it.

Yes, yes, I know. Paul Krugman is an ass from the proud line of asses who received Nobel Prizes.

Yeah I get it, on the Internet, where news has a half life of 15 seconds, stuff like this is funny. But there’s people behind those keyboards, and those people should show a bit more respect for a former president who has lived to a very ripe old age.

We should all hope to live to 96, and have our faculties mostly about us. That generation is quickly dying off. As much as I disagreed on political matters with Carter, which is irrelevant now because he’s not really “doing politics” anymore, I respect the man for his personal integrity, faith in Christ, and humanitarian works.

He was a terrible president, okay? Yes. And in visiting him, it seems like Biden might have the same mantle of stagflation, loss of face around the world, energy crises, and national insanity placed on his own shoulders, after it was worn by Carter in the late 1970s. Carter was the rebound president after Watergate (I don’t count Ford, who wasn’t elected, and didn’t do much to heal the nation, besides pardon Nixon). Carter inherited a weakened economy, instability in the Middle East, a worn-out military battered after Vietnam, and an energy crisis made worse by the oil cartels.

Biden inherited Antifa, QAnon, Trumpists led by Trump himself who actively throw darts at everything he does, a world-warping COVID-19 pandemic, greenhouse gases and climate change, a military worn out by 18 years of war, scandal, and social experiments, and an economy primed for massive inflation. To match Carter, all Biden needs is another Iran hostage crisis, which if he’s not careful, he may get.

Regardless of my criticism of Biden, he is POTUS, and he took the time to visit former President Jimmy Carter. That’s touching. It’s something Donald Trump would never even consider doing. In fact, Trump hated being around the other living presidents, but not more than they all hated being around him.

I hate to say it, but there’s a large likelihood that Carter won’t last through Biden’s term—certainly he can live to 110 if God wills it and he keeps his health. Biden’s visit to Carter will be long remembered as an act of compassion, respect, and friendship. We need more of that.

What we need less of is mocking a photograph of a very old man being visited by an elderly president. Leave the Carters alone. Why can’t we let them age with dignity and finish their lives with some modicum of respect? Lord knows they never got it while Jimmy was in office.