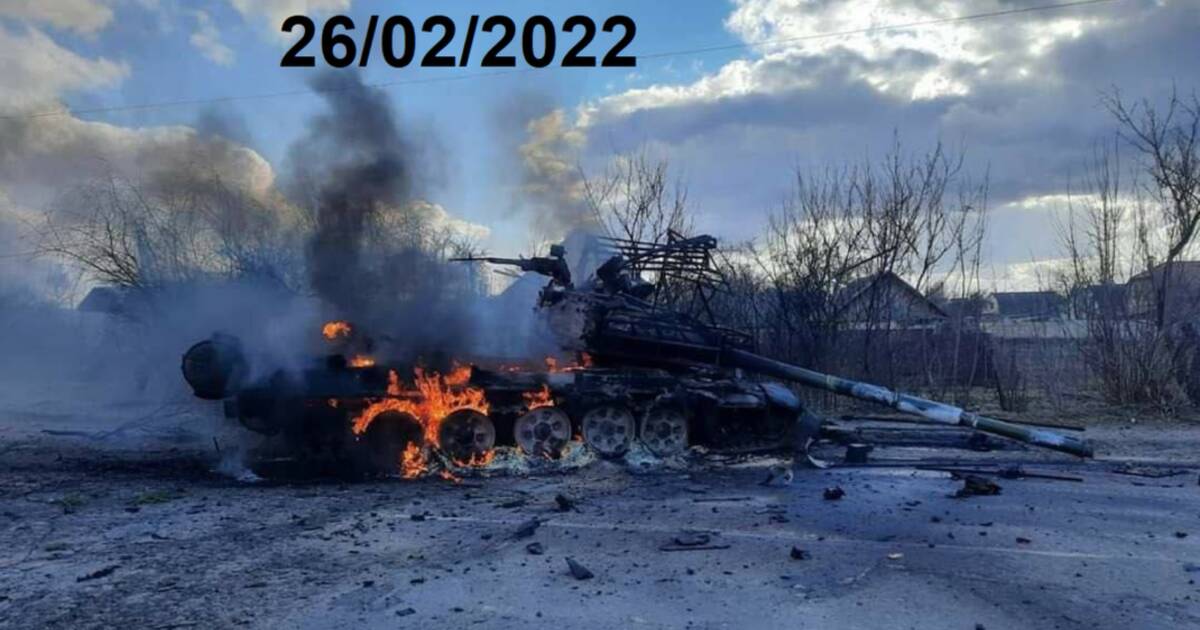 Ukraine is beating Russia. Improbable as that outcome seemed just a few weeks ago, it appears that not only will the Russians not achieve their military and political goals, but also that Ukraine is fully capable of winning the war solo. Not without enormous loss, however.

The website Oryx has been tracking documented equipment losses by Russian and Ukrainian military during the war. It’s stunning how much gear has been captured by the Ukrainians (and really on both sides), which is now being used against the Russians.

Of that 551 captured items, 104 are main battle tanks, mostly T-72 and T-80s, along with 16 more advanced T-90s. The Ukrainians have captured 37 Russian AGTMs, with 24 more abandoned by Putin’s army; 24 Man-Portable Air Defense Systems have been captured, 24 artillery pieces (both towed and self-propelled), 12 Multiple Rocket Launchers, and 10 SAM systems, including 5 Pansir-S1, and 4 Strela-10. These are just the documented captures, with pictures. There’s likely abandoned Russian gear all over the place, which has not been documented.

The Turkish-made Bayraktar TB2 drones have been massively effective in every role: as attack platforms, and in intelligence and spotting roles. The Russian anti-aircraft radars and anti-missile systems simply don’t appear to be able to pick them up and track them. They are able to operate almost unharmed over Russian-controlled areas and units. Oryx reports 46 documented kills of various Russian equipment and vehicles. Keep in mind, these are all documented kills, with pictures or video.

President Biden announced a new laundry list of military aid to Ukraine, following President Zelensky’s moving speech to the U.S. Congress. The list includes 100 drones, battle armor for 25,000 fighting troops (many of them will be foreign volunteers), 2,000 Javelin and 4,000 AT-4 anti-tank weapons, and 800 Stinger portable anti-aircraft systems.

What Zelensky wants is not more weapons. Yes, of course, he wants more weapons, and he’s grateful for all the support. I believe Zelensky sees the outcome of this war, and has confidence he can hold out indefinitely, and beat the Russians. What he wants is to avoid the unbelievable carnage and human suffering it will take to do that. He wants a no-fly zone and air defense to stop Putin from reducing his cities to rubble and killing civilians.

To underscore the cost of victory, Zelensky prepared a video. If you haven’t seen it yet, it’s extremely graphic and tear-inducing. Innocents and children are dying in Ukraine, and we will see the human carnage played out before our eyes even as Ukrainians stop Putin’s army from their achieving military goals.

Vladimir Putin’s pivot to “more realistic” demands seems to be an awakening that this war is no longer about Putin’s vision for a Greater Russia and a Revived Russian Empire with himself as Tsar. It’s now about Putin remaining in power. Peter Maass wrote for The Intercept comparing Putin’s situation and mindset to Slobodan Milošević, the Serbian butcher of Bosnia, who was eventually stopped in the mid-1990s by NATO airstrikes and the determination of the Bosnian people (and Kosovo guerillas). The notable difference here, as Maass wrote, is that Bosnia had virtually no weapons or army to take on the well-armed Serbs. Ukraine has been preparing for a Russian invasion since 2014, with lots of help from the West.

It was a journalist from Bosnia who made this comparative point the other day. “Don’t underestimate Ukraine,” Melina Borčak wrote on Twitter. “Bosnia was independent, but didn’t have an army when it was attacked. … There was an arms embargo, so we couldn’t even buy a handful of guns. Everyone thought, we will bleed out fast. We resisted for 4 YEARS.”

That resistance cost 100,000 lives along with physical and psychological scars “that millions carry to this day.” I know a few Bosnians and can attest to this. One Bosnian friend with whom I shared Maass’s article responded “spot on.”

Great wisdom: “Don’t ask what strategy is best for achieving a greater Serbia, or what strategy is best for the welfare of the Serbs,” Laszlo told me. “Ask what strategy will keep Milošević in power, and that’s the one he will follow. All of these things that he talks about, like nationalism and protecting Serbs, are just tools that he uses to stay in power. He doesn’t care about them at all. He doesn’t care about anyone at all. He cares only about staying in power.”

This is the portrait of Putin that Maass presented, just like Milošević. He will do what’s necessary to remain in power, to do what “binds more Russians to Putin”—continuing the war and the suffering that comes with it, than taking a diplomatic offramp. Putin’s calculus might change at any moment, if he believes he can wring more power from withdrawal under the right circumstances.

The war crimes that horrify so many of us are unlikely to factor into his calculations, because he has done this before, in Chechnya as well as Syria, with no fallout at home. Witness, for instance, the news reports in which ordinary Russians deny their forces are bombing cities in Ukraine despite being shown evidence of it.

Zelensky argued that the cost of defeating Putin, even if the West is helping in some way, is unbearable, and presented the moral case that the West should risk World War III to stop the bleeding. It’s a powerful case, but the risk of millions more dead is not to be taken lightly. Then Zelensky proposed in his speech to use this calamity in a “never again” capacity.

We need to create new tools to respond quickly and stop the war. The full-scale Russian invasion of Ukraine, which began on February 24th. And it would be fair if it ended in a day, in 24 hours, that evil would be punished immediately. Today, the world does not have such tools. The war of the past have prompted our predecessors to create institutions that should protect us from war. But they unfortunately don’t work. We see it, you see it.

So we need new ones, new institutions, new alliances, and we offer them. We propose to create an association, U-24, United for Peace, a union of responsible countries that have the strength and consciousness to stop conflicts immediately, provide all the necessary assistance in 24 hours if necessary, even weapons, if necessary. Sanctions, humanitarian support, political support, finances, everything you need to keep the peace and quickly save the world, to save lives. In addition, such association, such union could provide assistance to those who are experiencing natural disasters, man-made disasters, who fell victims to humanitarian crisis, or epidemics.

Remember how difficult it was for the world to do the simplest thing? Just to give vaccines, vaccines against Covid to save lives, to prevent new strains. The world spent months, years doing things like that much faster to make sure there are no human losses, no victims. Ladies and gentlemen, Americans, if such alliance would exist today that is U-24, we would be able to save thousands of lives in our country, in many countries of the world.

What is U-24? Is it a replacement for NATO? Is it some movement “for peace” that threatens immediate war to any nation that crosses it? Is it a transnational movement, or an attempt at one-world government? What kind of “union of responsible countries” is Zelensky proposing? How would the “union” work? What about national sovereignty and national interests? There are a lot of questions.

That Zelensky would choose a speech to the U.S. Congress to suggest such a thing, such a thing that is counter to the American form of a democratic republic, independent and self-determining, is quite puzzling. In a time when the European Union suffered the loss of the United Kingdom, and governments around the world are moving toward self-interests and not wide-ranging unions, this seems to be an overreach.

First of all, Zelensky could only make this statement if he believed that he’s beating Russia without any help. From the evidence, and history, it appears he is, and he can. If the Bosnians could hold out for four years with no real army and only NATO airstrikes much later in the war; if the Chechnyans could throw off an entire Russian invasion with nothing but guerillas (only to be crushed in a second invasion), then it seems that the Ukrainians, well-motivated and well-equipped, have the upper hand here.

What once appeared to be an inevitable Anschluss is now a grinding, hateful war that Russia cannot win, but Putin can use to keep himself in power. Zelensky will become the darling and hero of the world, and his U-24 suggestion troubles me.