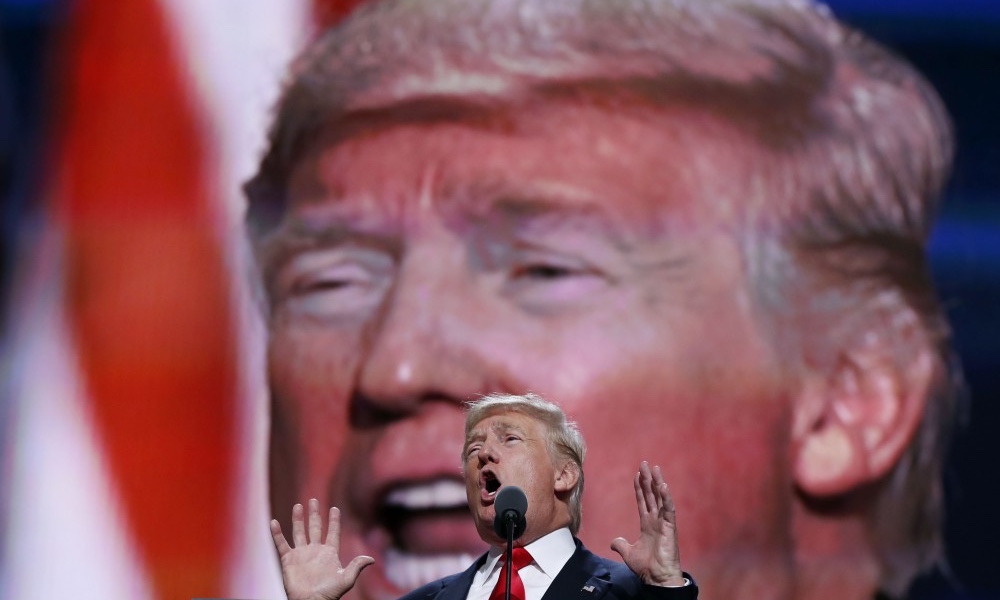 It’s clear we’re not through with Donald Trump. Not yet. After sweeping 22 endorsed candidates in Indiana and Ohio in GOP primaries last week, this week Trump continued his streak of endorsing winners in West Virginia and Nebraska.

Add to this Elon Musk’s remarks that he’d bring Trump back to Twitter, and we see that we’re far from ridding ourselves of The Former Guy. In fact, he’s still pretty much the current guy in the news, to the delight of publishers and executive producers of news organizations.

Musk said at the Financial Times Future of the Car Summit that he thinks “it was not correct to ban Donald Trump. I think that was a mistake.”

It’s clear the failure of courage has occurred in the GOP. They could have convicted Trump in his second impeachment trial. They could have barred him from ever seeking office again. They didn’t. They let Trump go, and now he’s surging back into power through voters choosing candidates like J.D. Vance.

I read an article in The Atlantic by David Frum, no friend of Trump, in which he takes us through his history with Vance. Just like so many politicians who abandoned bipartisan solution seeking for divisive culture war, Vance threw his lot with the win-at-all-costs Trumpist wing. “FrumForum Vance scorned culture-warring, valued expertise, endorsed social inclusion, rejected partisan rancor, and supported America’s important role in world security,” From wrote. “All that has been left behind by Senate candidate Vance.”

Vance’s superpower in those days was his biographical credibility as he spoke about Trump America to non-Trump America. In talks at forums like the Aspen Institute, in an essay for The Atlantic, across elite tables at venues like the investment bank Allen & Company’s Sun Valley media conference, Vance urged understanding of the people who had voted for Trump, even as he excoriated Trump himself as unfit, bigoted, authoritarian, fraudulent—a deceiver and exploiter of the people Vance spoke for.

I remember going back to the New Hampshire town where I grew up in 2016 to cover the NH primary for Decision Desk HQ. I saw many people who I personally knew, some of whom were visibly upset that NH didn’t allow voting-day party re-registration for Democrats who want to vote in the Republican primary. They wanted to vote for Trump, not Hillary or Bernie. I was puzzled, because since the day Trump descended the golden escalator at Trump Tower, I knew he was selling a sham political dream. The GOP has fallen for this dream, that the culture war can be won.

It’s a lie. But in order to win, you have to embrace the lie, and in 2020 this became obvious on both sides of our political divide. Many liberals have always believed that the culture war can be won, because at the core of every progressive is a culture warrior who rejects “live and let live” in favor of the radical transformations promised by messiahs like Barack Obama.

The GOP could have put down its swords for plowshares in 2021 after Trump’s attempt to suborn the machinery of democratic peaceful power transfer, but it not only didn’t do that, it has also done the opposite.

One thing that Trump’s candidates in West Virginia and Nebraska have in common is the ones in office voted to overturn the electoral college. The other thing they have in common is they won. Trump has an almost preternatural sense of when to take a chance on someone like Dr. Mehmet Oz or Vance, and when to endorse favorites or unopposed incumbents.

Where there is no clear candidate who satisfies both the ability to win and a record of personal loyalty to—as far as that goes, at least a history of not opposing—Trump, he will take an ambiguous position. Trump didn’t endorse Nebraska Republican Rep. Don Bacon. Bacon held that Trump had some responsibility for the Jan. 6 riot. But Trump also wouldn’t endorse Bacon’s challenger, Steve Kuehl. From POLITICO:

But in his words of encouragement to Kuehl, the former president may have inadvertently revealed why he never backed him. “Good luck, Steve, whoever the hell you are,” he said.

In other words, while Trump wanted Kuehl to win, he wasn’t willing to risk tarnishing his record by endorsing a candidate who seemed likely to lose. The former president was right about that: Bacon defeated Kuehl by a landslide margin.

Based on this, look for Trump to take some shots at Georgia governor candidate David Perdue before the GOP primary to be decided in two weeks. Kemp is poised to take the nomination without a runoff, according to the latest polls, which have Perdue trailing 38% to Kemp’s 54%. It would be great to see Trump go all-in on a losing candidate, especially in Georgia, more-or-less the epicenter of Trump’s troubles. If Kemp was under 50%, triggering a runoff, I think Trump would try to create a groundswell for Perdue. But with Perdue likely to win with no runoff, Trump will wash his hands.

Which brings us back to Twitter. Trump was famous for disposing of those he no longer had use for with a tweet. He can’t tweet away David Perdue, but he can make some offhand humiliating remark. I feel for David Perdue because I think he’s a good man and a conservative at heart. But he’s not a winner and therefore no help to Trump; he will pay by being publicly embarrassed like Chris Christie and a host of others who bowed and were dispatched.

Elon Musk’s Twitter purchase is supposed to close by October, or the deal is off, with a billion dollar price tag for whoever backs out first. With the remark about Trump, I suspect some will push hard for the Twitter board to cancel the deal, and pay the penalty. Richard Hasen wrote in Slate that Twitter employee action “could make a real difference.”

Engineers and others who work at tech companies are in high demand. There’s lots of competition among the leading companies to bring in and retain the best talent. Employees can organize and seek to pressure Twitter’s likely new owner to do the right thing; they can threaten to leave if he doesn’t.

The problem here is that most (or all) of the best Twitter employees have stock options. Musk’s purchase has a payday attached to it, plus Musk is pretty well known for increasing the value of things he buys. Forcing the deal to be cancelled will likely depress Twitter’s stock price and value, and therefore the future value of these employees’ wallets. How much does someone have to believe in the “dangerous for American democracy” trope to put their money and career on the line for it?

If I want it to rain in the midst of a drought, and do a rain dance, it may not rain. Or it might rain. But if it doesn’t rain, the answer is not to dance harder. Musk’s point is that we’ve done the ban and it hasn’t fixed the problem. In fact, the problem has gotten worse, as now we have more Trump in the candidates he has endorsed. These candidates do have Twitter and Facebook. Are we to remove them all, and make social media a playground only for those who say the things that are deemed “acceptable”? Will that make the problem go away?

No. It will only make partisan divisiveness worse, as it’s done already. No matter, Trump says he won’t go back to Twitter. Of course, I don’t believe that for a second. He’s on his own platform, a grift called Truth Social that looks and smells just like Twitter. Except I am on Truth Social, and it’s like being in an empty amusement park where none of the rides actually work, but they sit there beckoning to the riders to get in line. Truth Social is a failure, filled with boring links to election fraud articles, and Fox News content. It may yet turn out differently, but I don’t see it. There’s little conflict, and any drama needs conflict, or at least anything besides boring stupidity.

Trump “Truthed” his first messages a few weeks ago, which I can’t share here because Truth Social is a mobile-only app. His most recent is a push for Katie Arrington to unseat South Carolina Rep. Nancy Mace. Arrington has won before—she beat Mark Sanford in 2018 but lost in the general election to Democrat Joe Cunningham.

Races like this matter, because Trump likes to show winners and build momentum. Where there’s danger is not in social media, but in the voting booth. If enough Trump-endorsed candidates win and feel they owe him something, as well as having made brand promises to their constituents about winning the culture war against “the libs,” if Trump does try to run in 2024, the chaos could be significant.

Even if Trump does not run himself, he could anoint a candidate who effectively becomes “his man” in the White House. The best way to get rid of the extreme partisan division created by Trump is to have less Trump. But the voters, and the media, and the candidates running, are saying “more Trump, please.”

The reaction by those who want less Trump isn’t to engage those voters, media, and candidates, but to call them racists, deplorables, and to do everything possible to deplatform them. This only solidifies support for things like the stolen election conspiracy. More Trump is a recipe for grave division, poor decisions, and political chaos. Both sides seem to be clamoring for more Trump right now.

That’s troubling to me.