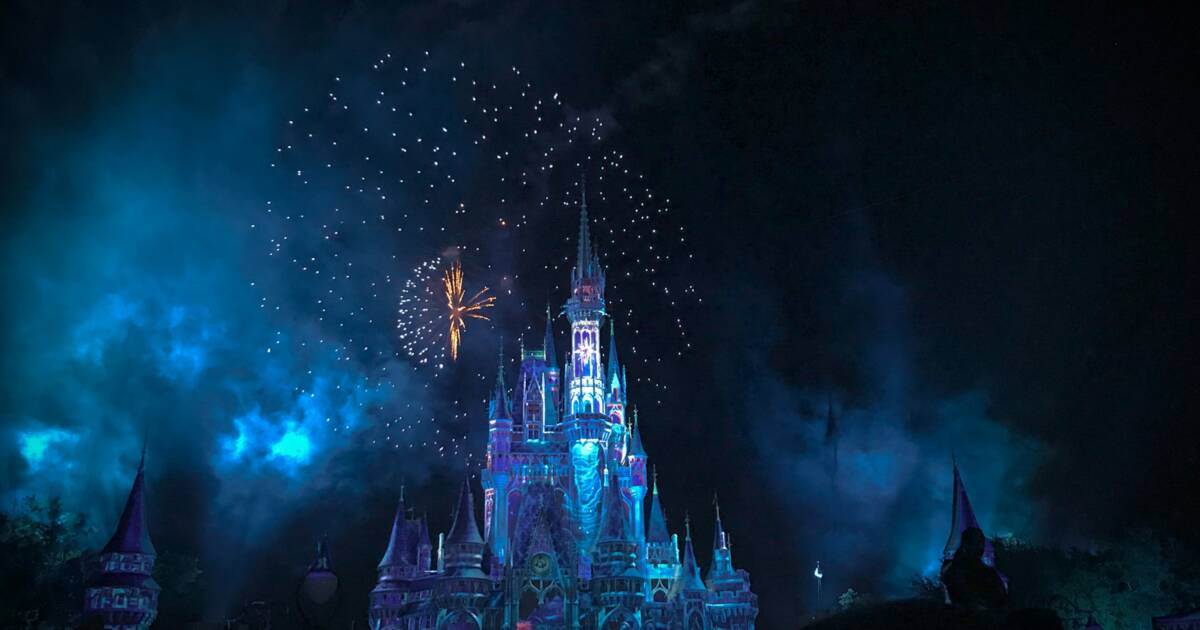 Did you know that Cinderella’s Castle at Walt Disney World is made to look taller by using smaller bricks in the upper sections, and in that the buildings on Main Street, only the first floor is a 1:1 scale; the middle floor is 5/8 and the top floor is 1/2 scale? Everything is engineered to fool your eyes. In the same way, Disney’s removal of “Ladies, and gentlemen, boys and girls” is forced perspective to distract you from its true wickedness.

Disney isn’t woke. WDW employs 77,000 people, many of whom are young single cast members. From what I’ve read, and heard in conversation with former cast members, WDW employee demographics are tremendously skewed toward LGBTQ-alphabet soup versus the general population. It’s just an attractive place for people in that community to work and play. Disney is the largest single-site employer in the state, and the company does make moves to maintain the woke illusion to keep them from becoming difficult.

Walt Disney was no saint, but he did want people to be happy. Not so much for those who worked for him. The only happiness under Bob Iger these days is found in dump trucks full of money for those on the right side of the round-eared cash register, and every wickedness under the sun to accumulate that filthy lucre.

When Walt had trouble expanding Disneyland in Anaheim, California because of recalcitrant city officials and angry neighbors, he looked to open a park where he could make unlimited numbers of guests happy (and him, richer). Enter the alligator-infested mosquito swamps of Orange County, Florida, where state officials regaled him with unprecedented autonomy.

The Reedy Creek Improvement District, the official organ ruling Walt Disney World, is a puppet government worthy of Vladimir Putin’s dreams. As Gov. Ron DeSantis noted, Disney can build its own nuclear plant. It can build whatever it wants, produce its own power, water, sewer, and ink its own permits. It can (and does) have its own fire service, and police force (which it doesn’t). Originally, Walt wanted to build an actual town, which is the idea that spawned EPCOT(which means “Experimental Prototype Community Of Tomorrow”). With Walt’s death, making an actual town was found to be too difficult, and the company went with the more reasonable (and profitable) vision of another theme park.

(In an aside, Disney did create a town of sorts, Celebration, which most would not call a rousing success. The only actual residents of Reedy Creek are those rare high-worth individuals who can afford a Disney Four Seasons or Golden Oakhome inside the park. One-percenters only, please.)

Politically, Disney would rather stay out of this culture fight (after all, rich Saudi guests don’t like rainbow flags shoved down their kaffiyeh). In 2021, both the California and Orlando theme parks quietly removed the “ladies and gentlemen, boys and girls” announcement from their nightly signature fireworks shows. The latest announcement is a nothingburger thrown to its LGBT employees, disguised as a political threat to Florida.

Disney is Orange County, Florida’s largest employer. Whether Reedy Creek Improvement District exists or not has no bearing on that fact. Here’s another fact: Orange County, Florida is governed by Democrats. Mayor Jerry Demings is a Democratic Party stalwart. Commissioner Nicole Wilson is “fighting for the rights of her constituents and nature.” Of the other five commissioners, only one—Christine Moore—is a Republican, and she is facing a strong Democrat challengerin 2022.

If the Florida legislature abolishes Reedy Creek, Disney will be in a stronger forced perspective as a woke organization. In fact, Orange County will lavish Disney with more kisses, pushing the woke illusion even further. The media will willingly participate in this forced perspective.

Here’s an example of the media’s slant. The largest employer in Florida is Publix Super Markets. Remember the venom spilling from the media over Gov. DeSantis and his apparent relationship with Publix over COVID vaccines? CBS’ “60 Minutes” ran a story that made it appear as if Publix got some “pay to play” from the governor, drawing rebukes from both Democrats and Republicans in Florida. Publix assiduously keeps out of political arguments, and nobody would call the family-values oriented company particularly vocal in wokeness. In fact, according to OpenSecrets, Publix gave just over $2 million, mostly to Republicans in the 2020 cycle, the great majority of which was from individuals. But looking its history, Publix tends to give to whatever party is in power in Florida, though it has always somewhat favored the GOP.

“60 Minutes” tried to tie Republican DeSantis to Publix, making Publix seem unwoke and evil in the eyes of liberals. Disney is viewed as a left-leaning company in a Democrat-dominated county, employing a demographic of employees that tends toward liberal causes. Disney tried to stay out of the “Don’t say gay” fray and earned a rap on the snout from the media and its own employees. Bob Iger isn’t dumb; he will do whatever it takes to keep the right forced perspective, especially when it comes to threats that affect the bottom line. But of course, it’s all just like the buildings on Main Street: an illusion.

Disney’s true god is money. People are just a means to make more of it. When the Mouse bought Lucasfilm and all things Star Wars, its lawyers decided this didn’t mean the obligations attached, even if that meant crushing those with no voice and no highly-paid attorneys. The company’s refusal to pay royalties to Star Wars writers earned a scathing letter from author Alan Dean Foster, who wrote the original novelized version of Star Wars. “I know this is what gargantuan corporations often do. Ignore requests and inquiries hoping the petitioner will simply go away.  Or possibly die.  But I’m still here, and I am still entitled to what you owe me.” Foster was suffering from cancer at the time. Facing shame from the Science Fiction and Fantasy Writers of America (SWFA), Disney finally settled with Foster, six months later.

In the Disney worldview, lawyers are priests, money is god, and people (laughingly called “guests” and “cast members”) are merely supplicants, to be judged by the House of Mouse. If you live in Florida, Disney used to care about you, but they no longer do. Now they care about streaming content, rich foreign visitors, and China.

Making movies in communist China requires kowtowing to the CCP. This means censoring movies, and thanking genocidal regimes for their indulgence.

Disney has a long history of censoring its films to remain in the CCP’s good graces. In 1996, the company was blocked from the Chinese film market after its production of Kundun, which displays Chinese oppression of the Tibetan people. In 1998, then Disney CEO Michael Eisner apologized for the movie, calling it “a form of insult to our friends.” The studio even went so far as to hire legendary Secretary of State Henry Kissinger to help manage the fallout. The movie continues to be stigmatized today and is not available on Disney+.

You won’t find any wokeness in communist China. You will find censorship, oppression, and wickedness. All Disney sees is money.

Disney is not scared of the evangelical church or its adherents in America. For eight years, the Southern Baptist Committee recommended boycotting Disney, and the company likely never felt it. As David Thornton wrote, these kinds of boycotts rarely work unless there’s some special leverage the boycotters have over the company. There’s nothing in it for Disney to bow to Christians or Christian values.

In 2019, Disney threatened to stop production in Georgia over Gov. Brian Kemp’s signing of the fetal heartbeat law. “I think many people who work for us will not want to work there,” Iger told Reuters, “and we will have to heed their wishes in that regard.” Iger was lying. The company continues to film in the state, including Coastal Georgia. According to the Georgia Department of Economic Development, Disney’s got a Marvel series, two Disney+ TV specials, and a feature film prepping or in production. Since 2019, Disney has filmed two Marvel miniseries: Hawkeye and WandaVision, at Pinewood Atlanta Studios. It doesn’t appear to be as hard as Iger said it would be.

In the same way, Disney will only appear to bend to its rather vocal LGBTQ-alphabet soup constituency—its employees—at the world’s biggest tourist attraction in central Florida. The political makeup of Orange County reflects the values of the employees, not the company. In reality, Iger and his ultra rich crew of executives would rather deal with business-friendly Republicans than woke, green, Bernie Sanders followers. That is, unless they can get something out of the deal. The reason Disney continues to do business in Georgia is money. The reason Disney appears woke in Florida is also money. Finally, the reason Disney supports genocide in China is, again, money.

The Bible says that love of money is the root of all kinds of evil (1 Timothy 6:10). Disney worships money. In all these cases, Disney uses its biggest talent, mastering the art of forced perspective, to mask its real wickedness.