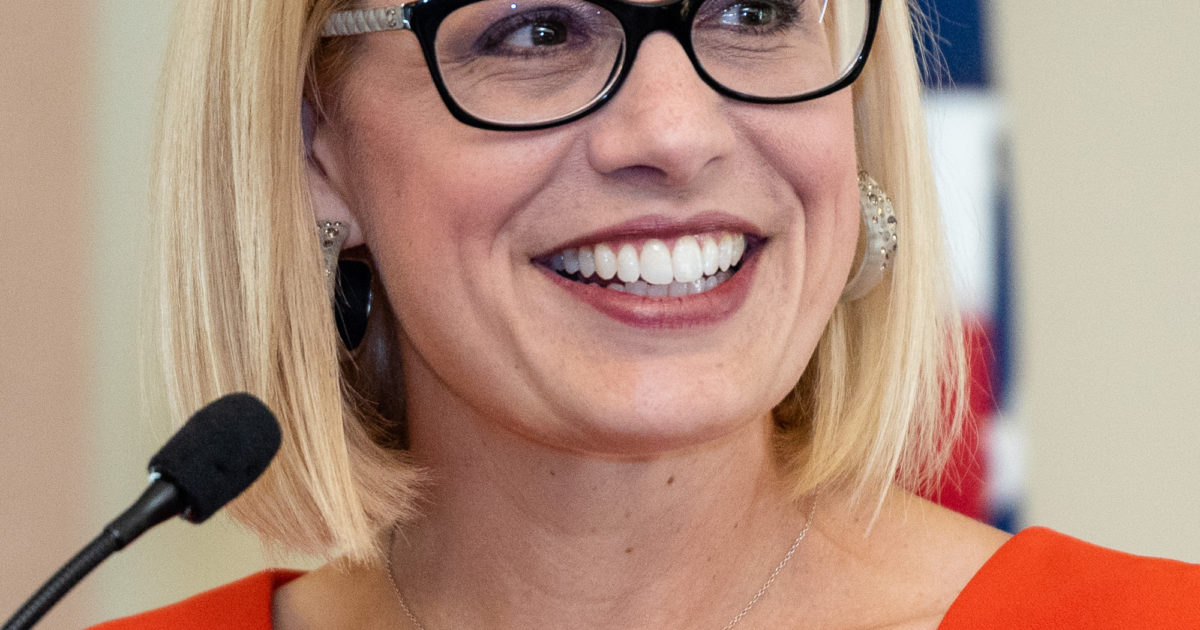 To remember the socialist Sinema, you’ll have to get into the Way Back Machine and travel back to the Arizona Senate campaign of 2018. Sinema was squaring off against Republican Martha McSally in a race that pitted the two congresswomen against each other in a battle for Jeff Flake’s Senate seat.

I remember this race well because there was a lot of angst about Sinema. Looking back, some of the biggest issues in the campaign seem to be the fact that Sinema was once photographed wearing a “pink tutu” at a protest and the allegation that she was “a Prada socialist.” The charges were not without merit. Sinema was once a Ralph Nader supporter in the Green Party. McSally, a former Air Force fighter pilot, framed the race as “patriot against protester.”

A funny thing happened on the way to the election though. In a race where McSally was once heavily favored, Sinema started gaining ground. By October, McSally was acknowledging on the Sean Hannity Show, “I’m getting my ass kicked.” Sinema went on to win the election by about 2.5 points.

But, as Paul Harvey used to say, “Here’s the rest of the story.”

Not bad for a radical Prada Socialist!

What really made me think about Kyrsten Sinema this week was the filibuster. After taking the Senate, there was a lot of pressure from progressive groups for Majority Leader Chuck Schumer to nuke the filibuster.

Do you know who stepped up to save the filibuster? Kyrsten Sinema.

Yes, it’s true. This radical pink tutu-wearing socialist went to Minority Leader Mitch McConnell and told him that she opposed eliminating the filibuster. In the newly 50-50 Senate, her vote alone would kill the attempts to invoke the nuclear option, but Joe Manchin (D-W.V.), ranked 53 on the GovTrack scale, joined her as well.

I think it’s fair to say that Republicans were wrong about Sinema. Granted, she’s not a conservative unless you use the term as an adjective to modify the word “Democrat,” but she is legitimately a moderate.

And how about the rest of Martha McSally’s story? After losing to Sinema, McSally was appointed to Arizona’s other Senate seat when Jon Kyl resigned. The two women ended up going to Washington together.

But McSally’s story doesn’t have a happy ending. In a special election in 2020, she once again lost, this time to former astronaut Mark Kelly.

The saga of Kyrsten Sinema and Martha McSally has lessons for both parties as we shift gears from 2020 to 2022. The biggest and most important lesson is that Republicans can’t win simply by using the “Invasion of the Body Snatchers” strategy of pointing at their opponent and screaming “Socialism!”

Playing the socialist card may have worked in the past, but, like crying wolf, it has lost its effectiveness. This is especially true when the Democrats nominate a moderate. If there is any doubt of this, one need look no further than the 2020 losses of Donald Trump, David Perdue, and Kelly Loeffler where “socialism” attack ads were prominent in all three races.

Far-left candidates may occasionally win in conservative states if the stars align and Donald Trump campaigns for their opponent, but it would be far easier for Democrats to pick up Republican seats if they could nominate a few pro-life, pro-gun candidates. This is especially true in the South and Midwest. Such candidates might have more staying power than Doug Jones of Alabama who, in McSally fashion, won a special election in 2018 but was given walking papers in 2020.

The question is whether Democrats would rather stick to pro-abortion and pro-gun principles and lose or have a moderate who can actually win. In a version of the Buckley Rule, Democrats would do well to nominate the most liberal candidate who can win rather than the most liberal candidate period. Democratic voters should remember that they won’t always have Donald Trump campaigning for their Republican opponents.

The other lesson for Republicans will be more difficult for them to learn and that is that general election voters do not like Donald Trump. As I wrote for the First in November 2020, what we saw in the election was a country that rejected both extremes. Voters told President Trump, “You’re fired,” but also gave Republicans a larger caucus in the House.

To pick on Martha McSally again, she was a rather mainstream Republican who embraced Donald Trump on the campaign trail. Trump’s support enabled McSally to best “Chemtrail Kelli” Ward in the Republican primary, but Trump’s antics were toxic in the general election where he dissed McSally at a rally a few days before the 2020 election, saying, “You got one minute! One minute, Martha! They don’t want to hear this, Martha.”

Unfortunately, the Republicans did not take this lesson to heart. The party went all-in on Trump’s false claims of a stolen election and tried to disenfranchise several entire states that had voted for Biden. This turned the easily winnable Georgia Senate races into tossups. When President Trump rallied for Perdue, who nearly won the November election outright, and Loeffler just before Election Day and persuaded them to endorse throwing out Georgia’s Electoral College votes, it persuaded many fence-sitters, myself included, to vote Democrat.

It also didn’t help that the president, in what will be remembered as one of the biggest strategic errors in the history of American politics, spent two months telling his base that Georgia’s elections were rigged. As a result, many of Trump’s supporters answered his call to be in Washington on January 6 instead of at the polls in Georgia on January 5.

To return to Arizona as a microcosm for the country, Martha McSally lost two winnable Senate races in two years by running close to Trump, but instead of breaking with the failed president, the Arizona GOP is now in the hands of “Chemtrail Kelli” and is tweeting about being willing to die for Trump.

In 2021, both parties find themselves at a crossroads. Do Democrats shift gears toward progressivism or do they stick with the moderate, center-left Biden politics that won the White House? Will Republicans continue to swear allegiance to the man who lost not only the White House but the House of Representatives and Senate as well? Whichever party learns best the lesson that their partisan fringe is not representative of general election voters will probably carry the day.

As the saying goes, all either party has to do is not be crazy, but it’s doubtful that either side will be able to meet that low bar.