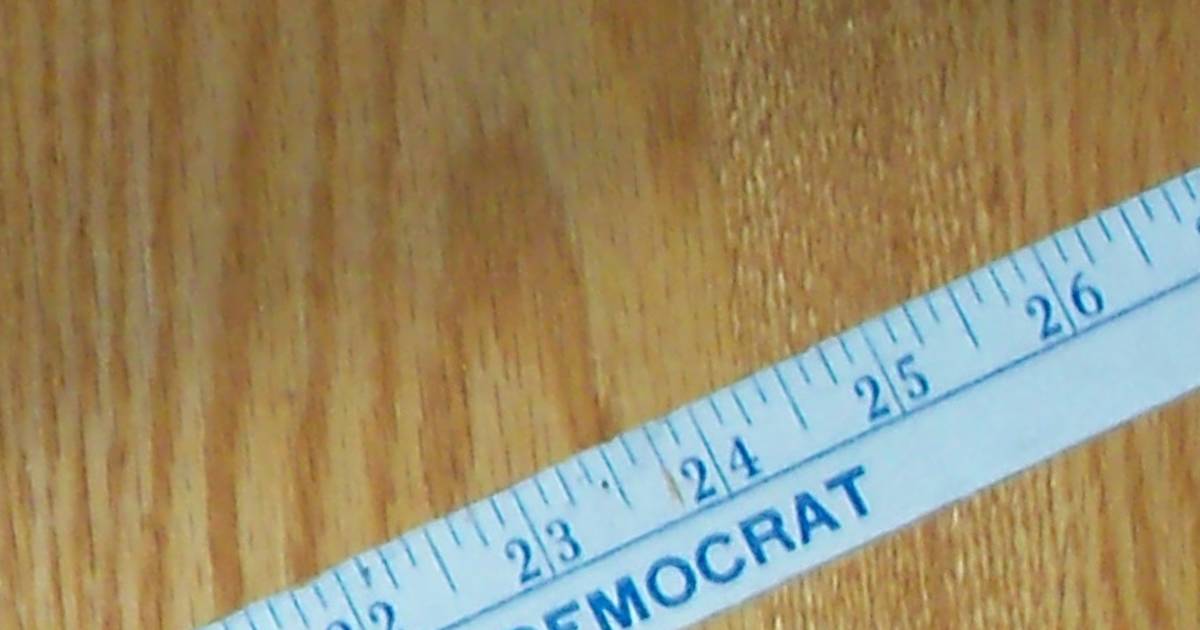 How does one measure a president? President Joe Biden is being compared to FDR as if the media all dipped their spoons into the same soup, all at once.

Do you really know anyone who describes Biden as “electrifying?” I don’t, and for your information, I live in a Democratic political bubble, according to the New York Times. Just go to this site and enter your address, and you’ll be shown a thousand of your neighbors, properly assigned to a red or blue team.

I’d plunk down $20 right now to cover this bet: If I asked my liberal neighbors to pick three words that describe Joe Biden, not one of them would choose “electrifying.” Also, I only bet on sure things.

Joe Biden isn’t the devil, certainly he’s not just because he’s a Democrat. He’s not the end of the world. In fact, Biden was picked specifically because he’s about as vanilla, milquetoast, neutral beige, and positively un-electrifying a candidate the Democrats could find. In order to win, all Biden had to do was call a lid on the day at 9:00 a.m., get some rest, and let Donald Trump do all the talking.

That being said, Democrats are hell bent on doing as much damage as possible to Trump’s legacy, while not changing very many of his actual policies. It’s a fun game. Oppose China, but leave Trump’s tariffs in place. Appease Russia by overt military pullbacks, in exchange for Putin pulling back from Ukraine, but seem tough on Russia because of “election stuff,” while maintaining Trump’s stance on Ukraine.

Withdraw from Afghanistan, but on a longer timetable than Trump proposed, and call it Biden’s withdrawal. Sign a massive $1400/person pandemic relief bill, when the one Trump wanted was $2000 but only got $600. Accuse Trump of stealing RBG’s seat on the Supreme Court, while openly pushing a court-packing plan. Spend trillions on all kinds of pork projects, calling it “infrastructure,” but no border wall.

Falsely claim that Trump’s “Operation Warp Speed” left the Biden administration to build everything “from scratch” while setting ludicrously low bars to clear, making it obvious that it was indeed the plan the Trump administration put together, just with Biden’s name on it.

I could keep going, but I think you get the idea. Biden is so great that he has to be compared to FDR (they’d use Lincoln but Lincoln was a Republican) in order to not make Trump look less bad.

It’s not the fault of Republicans, or conservatives, or even middle-of-the-road moderates, that Democrats have had to resort to such funhouse mirrors. They’ve been doing this for so many years that they’ve literally run out of bad analogies to describe Republicans, and they’ve run out of hero comparisons for Democrats. And by “they,” I mean the media qua the Democratic Party.

Remember Fusion GPS? They had a lot of former journalists as employees. Erick Erickson (among others like Steve Krakauer) keeps track of all the revolving door spinning.

Ruth Marcus, who heads the Washington Post Editorial Board, is married to the Obama Administration’s former Federal Trade Commission Chairman. Jonathan Allen had been at the Politico before going to work for Debbie Wasserman Schultz, then back to Politico before going to the left leaning Vox. Now he is at NBC News. Andy Barr worked for the Politico before leaving for Democrat politics. Michael Scherer was at both Salon and Mother Jones before going to Time. Laura Rozen was at Mother Jones and the American Prospect before Foreign Policy magazine. Even Nate Silver had started out at Daily Kos. Then, of course, there is Matthew Dowd, who worked for scores of Democrats before working for George Bush. That, though he later washed his hands of Bush, bought him street credibility with ABC News to become its senior politically analyst alongside George Stephanopoulos, formerly of the Clinton Administration.

The most politically polarized 20% of voters get their news exclusively from sources that reinforce their own political worldview. There’s no opportunity to hear another point of view, never mind debunk the worst lies of their own side. Democrats overwhelmingly own the media-government-media revolving door.

When I said they’ve literally run out of awful metaphors—I should say metaphors for awful—I mean that the smearing Republicans as the devil, or Hitler, has been going on for most of a Boomer’s lifetime, and the entire lifetime of any Millennial.

They called Reagan a warmonger, an old has-been B-movie actor. They mocked his “Star Wars” SDI plan. They drew cartoons portraying him as aloof and uncaring about the poor, and those suffering in the AIDS epidemic. They firmly believed Reagan wanted to start World War III.

Then came the most genteel, gentlemanly, and genuinely nice guy, George H.W. Bush. The media mercilessly smeared him based on a press pool report at an exhibit during a visit to the National Grocers Association convention. The Washington Post recounts the murder scene:

In 1992, during his bid for reelection, President George H.W Bush visited the National Grocers Association Convention in Florida. He happened to stop by an exhibit featuring a new type of checkout scanner, which could weigh groceries and read torn bar codes. According to the two-paragraph pool report filed by the lone reporter at the event, Gregg McDonald of the Houston Chronicle, Bush had a “look of wonder” on his face, a detail McDonald himself didn’t bother to include in the story he wrote on Bush’s visit to the convention.

The New York Times picked up this report and embellished it to maximum effect. The lede read:

As President Bush travels the country in search of re-election, he seems unable to escape a central problem: This career politician, who has lived the cloistered life of a top Washington bureaucrat for decades, is having trouble presenting himself to the electorate as a man in touch with middle-class life.

Today, for instance, he emerged from 11 years in Washington’s choicest executive mansions to confront the modern supermarket.

The story was immediately attacked by the White House, and later thoroughly debunked by anyone who cared to look at the facts and the witnesses present. But the smear stuck. It stuck because it wasn’t journalism, it was political hackery and activism. It was effective propaganda, as good as anything the Soviets ever cooked up.

By the time George W. Bush won the White House (under protest due to the Florida election fiasco), the media was ready to slay him from his inauguration day. They still hand-wring over “Bush lied and people died” and did they really believe there was WMD. They attributed the worst of motives and intentions to Bush, even after the emotional wrenching of 9/11.

Dan Rather spiked his own career trying to do in GWB, while CBS reacted by firing the little people for failing to contain the news titan.

Fast forward eight years of Obama worship and leg-humping, while the spinning door spun even faster, exchanging money, influence, careers, and marriages, for politically active journalists. They targeted another decent man, Mitt Romney, and hung him on “binders full of women.” In fact, the binders are real: all 15 pounds, 6 ounces of them.

The media only cared to bathe in such nostalgia for Romney (never mind Bush or Reagan) when their dreams of a GOP golem worthy of their hate arose like a Japanese kaiju breaking from the sea.

The kaiju was Trump. At first, the media fed the monster like he was their pet or doing their bidding, knocking out other candidates of whom they were more fearful. Then, seemingly overnight, the logarithmic measure of evil the media used to describe Republicans hit its end. The yardstick broke. There were no more metaphors left. Trump just ate the hate, and spit it back on the media.

Now liberals who trashed Reagan have suddenly found a soft spot for the Gipper. Now they published G.W. Bush’s criticisms. They lauded George H.W. Bush at his own funeral, mocking Trump’s frowns. Now, with Trump present, the media all but explicitly confessed that they attacked men like Reagan, Bush 41 and 43, John McCain, and Mitt Romney out of crass political activism. They didn’t bother using a yardstick to measure the character or ability of these men; they only looked at the color of their tribe.

When Trump came along, they had nothing even remotely able to describe him as he was. So they continued to burn the same straw men: Fascist, Hitler, dictator, warmonger, narcissist, idiot—the ones they used against Reagan, the Bushes, and other Republicans. But the straw men wouldn’t burn because they’d all become piles of ash. The media broke the yardstick used to measure presidents.

Now they’re trying to use that same broken yardstick to measure Joe Biden, whose sole purpose in running for president was to unseat Trump. But it’s no longer enough to unseat Trump. As bad as Trump’s closing legacy of political subversion, an attempted putsch, and his coprophagic vomit of lies was, Biden’s media team has to portray every single thing that happened during Trump’s term as hell on earth and baby killing.

Well, it wasn’t. There was plenty that made sense to many Americans. But it’s not enough to let those things stand (though as I wrote earlier, Biden is in fact letting much of it stand), because the woke agenda has to be morally better in every way.

What did the media, and everyone else, expect to happen? Why are they even mildly surprised? There’s no surprise here, only blame and opportunity.

Remember, when the media goes looking for someone to blame in 2022 when then economy crashes and people are unhappy, we didn’t break the yardstick. But it’s high time we fashioned a new one.