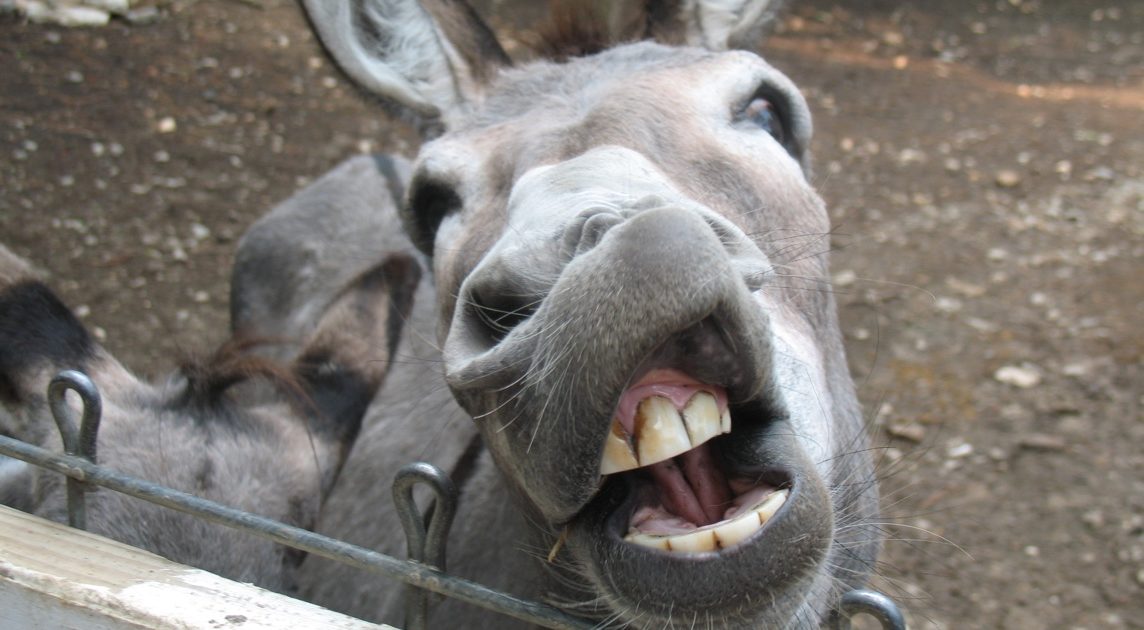 Mark Twain didn’t say “A lie can travel halfway around the world before the truth can get its boots on,” but Twitter proves it every hour of every day. President Trump retweeted a horrendous lie.

It’s not only horrendous because it’s false, it’s also horrendous because the implication to people who believe it is that our election systems are totally and completely compromised. The basis of the tweet is some random guy’s “analysis” of data dumps from Edison Research that he says proves Dominion Voting Systems’ tabulating machines switched votes from Donald Trump to Joe Biden. The story, complete with “red alert” emojis, is posted on a website called TheDonald.win. I kid you not.

Other Trump-supporting media such as The Gateway Pundit and OANN are hyping this theory. If it was the tiniest bit true, you’d see top-notch lawyers out there joining Trump’s legal team and the FBI raiding Dominion’s offices. In fact, if any of it was true, the FBI should raid Dominion’s offices–hell, convene the federal grand jury tomorrow, because this is Manchurian Candidate-level bad.

Anyone who can tie their own shoes knows that you can’t make magic Python scripts that search Edison Research data used by the New York Times and others to simulate election results, in order to find obvious data discrepancies in real election data from voting machines, when that data is still in the machines, which are “air gapped” to the Internet, and locked until the election is certified. In other words, user “TrumanBlack” has as much chance of getting the nuclear codes in the president’s “football” bag by scanning through random physics papers as he has of uncovering the “smoking gun.”

Yet, Trump’s tweet was retweeted over 221,000 times. People want to believe that the election was stolen, so any convenient story, no matter how audaciously fabricated, is worth sending around the world.

This forces competent lawyers like David French to lead readers through the hedgerow of lies in order to find truth. I’ve noted this several times before and will mention it again. The Trump “legal team” is led by non-lawyers. David Bossie, Trump campaign chief Bill Stepien, and Jason Miller lead the team, and not one of them is a lawyer.

There’s a reason for this, summed up in five words: “disbarment is a terrible thing” for a lawyer who makes a living from practicing law, which sort of requires a law license and bar membership. Take for instance this account of Trump’s legal team pressing its case before an actual judge in Arizona.

To say it’s not going well is being too kind.

In the real world, outside of Twitter retweets and birther-level conspiracies, alleging massive election fraud requires massive proof. Even the most Trump-friendly judge in the world still has to be a judge, especially when the whole world is watching.

Just because Trump can’t produce massive proof doesn’t mean he doesn’t possess some truth. There is indeed election fraud. It’s not as rare or uncommon as many Democrats would have you believe. In fact, fraud is so baked in to states like Louisiana, where “walking around money” is normal campaigning, that both sides are alleging it happened (and it probably did, on both sides).

Taking a little truth and magnifying it, weaponizing it, and placing it in the hands of the enemy is a Trump speciality. Before it was a Trump specialty, it was the opus magnus of rabble rousers like Saul Alinsky, who penned “Rules for Radicals” back in 1971, when Richard Nixon was still a-plumbing the Democratic National Committee’s offices at the Watergate Hotel.

Democrats absolutely love Alinsky, especially one Democrat named Barack Obama, and his former chief of staff Rahm Emanuel, who never let a crisis go to waste. Obama and his coterie of lie-spinners were so good at slinging whoppers that they should have opened a Burger King. Instead, they gave us Obamacare. The late, great Charles Krauthammer (oh, do I miss him!), wrote, when Jonathan Gruber spilled the beans on the massive lie.

It’s refreshing that “the most transparent administration in history,” as this administration fancies itself, should finally display candor about its signature act of social change. Inadvertently, of course. But now we know what lay behind Obama’s smooth reassurances — the arrogance of an academic liberalism that rules in the name of a citizenry it mocks, disdains and deliberately, contemptuously deceives.

There’s something that makes you want to punch smugly superior people in the face, like Reza Aslan wanted to do to MAGA-hat-wearing high schooler Nick Sandmann, except it’s Curt Schilling punching Ben Rhodes.

Trump’s lies have the benefit of being the kind of lies Nigerian scam artists tell in emails proclaiming they’ve placed $14.3 million dollars in a trust fund waiting for you to transfer it into the U.S., and you get to keep $500,000, if you just give them your bank account information. It’s called “419 fraud” after the Nigerian code section it violates, and the scam artists make their pitch purposely audaciously false, to allow the real marks to self-select, while others hit delete. It saves the criminals a lot of time sorting out the true believers from the merely curious.

The Democrats, including Joe Biden, tell much more sophisticated lies, which have the ring of truth, and a moral untouchable “how dare you!” smugness to them. “We have to pass it to find out what’s in it” kinds of lies that imply “trust me” while Pelosi plots her next political hit job.

It occurred to me earlier tonight, when my 11-year-old son was shocked to find out (“why wasn’t I told?”) that President Trump was actually impeached and I had to explain to him why, that Pelosi might have pulled off the most devious, brilliant and forward-looking lie this year (it hasn’t been a year since the impeachment, and it seems like a decade has passed). I don’t know if this is true, but it fits the facts, and I certainly wouldn’t put this past Democrats who paid for a “pee tape” story and then sold it to the intelligence community as evidence of a conspiracy and criminal intent by their political rival.

While Pelosi was impeaching Donald Trump on the most rushed, pushed, and roughhoused schedule in congressional history, nobody had time to actually examine the claims Trump was making in his conversations–and his lawyer Rudy Giuliani’s conversations–with Ukrainian leaders. Trump wanted Ukraine to investigate Burisma, Hunter Biden’s connections with it, and various other vectors that involve China, and lead straight to dad Joe, who happened to the be Vice President of the United States at the time in question.

When these allegations were given legs by the appearance of Hunter’s laptop computer, which is more legs than the entire Russiagate investigation led by Bob Mueller found, Democrats and former intelligence officials yelled “Russian disinformation!” However, there’s not one ounce of proof that the Hunter Biden laptop story is Russian disinformation.

Was the entire impeachment political theater more than just a longshot “let’s get rid of Trump” story? Because, as a “get rid of Trump” plan, it failed, and if not for coronavirus, would have cost Biden the White House.

Donald Trump played the inoculation of lies game in 2016, and a month before the election, when the Access Hollywood tape came out, he was truly immune to it. By that time, after Marco Rubio’s “small hands” play in a debate got people to actually think about “down there” on Trump’s anatomy (eww!), and enough coarse articles, quotes and stories to fill a Penthouse “Forum” section were published, nothing could touch Trump.

Late in 2019, Trump’s so-called crime (and it was wrong, and even impeachable, if the investigation was done right) was used to inoculate Joe Biden to Hunter’s connections with Burisma, and his crack-filled history with hookers and board rooms made possible by his very famous father. The story became about Trump’s behavior, and it was just assumed that Biden was as pure as the driven Washington snow.

Glenn Greenwald, ex-founder of The Intercept, hardly a bastion of conservative wagon-circling, referenced this miracle in his new independent substack column. If Trump said it, it must be Russian disinformation, or at least it looks enough like Russian disinformation to be dismissed as just another Trumpian lie.

The Biden campaign immediately embraced this evidence-free claim about Russia from Schiff and the intelligence community to justify its refusal to answer questions about the revelations from this reporting. “I think we need to be very, very clear that what he’s doing here is amplifying Russian misinformation,” said Biden Deputy Campaign Manager Kate Bedingfield when asked about the possibility that Trump would cite the Hunter emails at the last presidential debate. Biden’s senior advisor Symone Sanders similarly warned on MSNBC: “if the president decides to amplify these latest smears against the vice president and his only living son, that is Russian disinformation.”

Breathtakingly brilliant. The scandal is no longer a scandal, it’s “smears.” Trump’s saying it, even if it’s true, makes it a lie.

The Biden campaign became positively Trumpy in its weaponizing of a lie so big that only true believers would buy it.

Now the same crew wants us to believe that they want to “unify” the nation. They want to find common ground with conservatives and Trump voters. Yeah, as long as it’s their ground. The ground conservatives stand on is cursed earth, that must be burned, sterilized and salted so nothing can ever grow on it again. Join the Democrats in unity, and stand with them like the Lincoln Project, which believes that the GOP must be punished for yielding to Trump, and therefore would endorse Raphael Warnock and Jon Ossoff in the Georgia senate runoffs against Sens. David Perdue and Kelly Loeffler.

I don’t call that unity, I call it surrender.

This brings us full-circle around the globe to today. Half the nation is buying the 419 scam by Trump that the election was hopelessly corrupt and stolen by the Democrats, who lost by a similar margin of electoral votes, in many of the same swing states, in 2016, when the election was, apparently, eminently fair.

The other half is buying the lie that Joe Biden has never spun a fib his whole life, and Hunter is a troubled youth, and how dare you attack a concerned father who has suffered so much pain? They are buying the lie that Trump voters need to be punished for elevating Trump to the presidency. This reminds me of the old Groucho Marx line, “I refuse to join any club that would have me as a member.”

In this case it’s the GOP or the Democratic Party. Take your pick, because both of them have become the Liars Club.