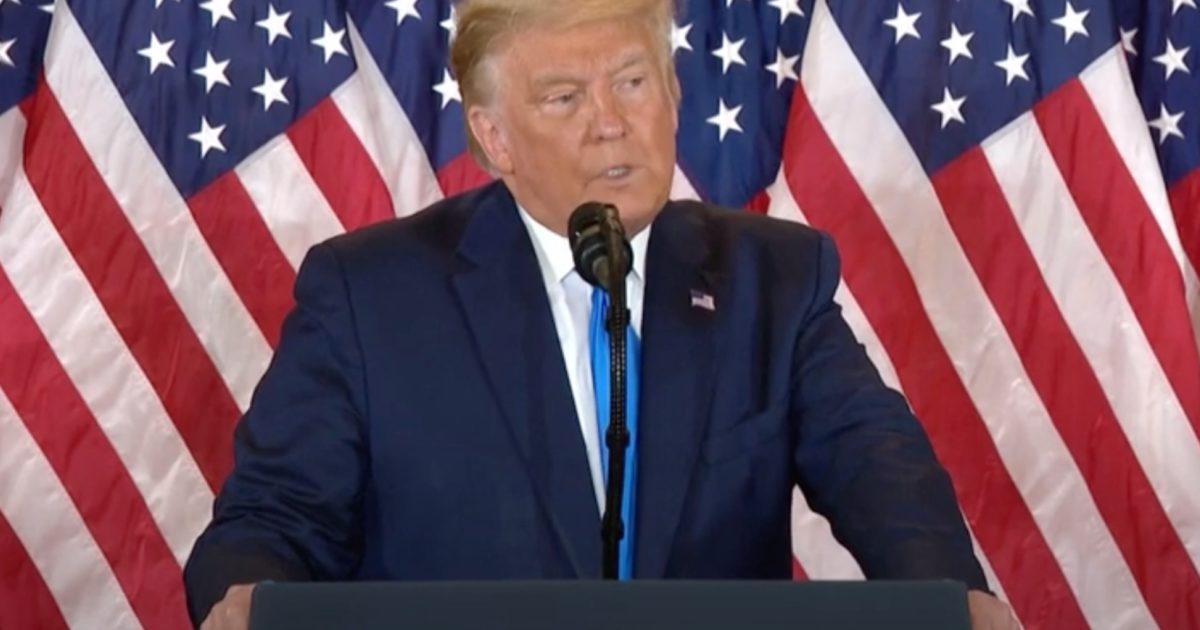 “Everything is proceeding as I have foreseen.” — Emperor Palpatine.

Last night, President Trump spoke from the White House and told the American people that a “very sad group of people” is trying to disenfranchise them. Record turnout in nearly every state seems to belie that opening comment.

The president went on to say, “North Carolina, big victory with North Carolina. And so we won there, we lead by 76,000 votes with almost nothing left. And all of a sudden everything just stopped. This is a fraud on the American public. This is an embarrassment to our country. We were getting ready to win this election. Frankly, we did win this election.”

We saw this coming. Nobody can claim we didn’t see it coming. For months, the Democrats and the media have been preparing the public for a close race, where Trump appears ahead based on election night returns, and on the next day, or in the next few days, state after state flips back to Biden because of uncounted mail-in ballots. They called it the “red mirage,” indicating that what you saw last night isn’t really…real.

On the other hand, Trump has been claiming for months that Democrats will try to steal the election through some massive mail fraud scheme. He has claimed this with no evidence, and zero historical framework. He simply said it will happen, and many people will believe him.

Trump finished his short remarks with this, before calling Vice President Pence to the podium.

We want all voting to stop. We don’t want them to find any ballots at 4 o’clock in the morning and add them to the list, okay? It’s a very sad moment. To me, this is a very sad moment. And we will win this. As far as I’m concerned, we already have won it.

To Pence’s credit, he didn’t go anywhere near Trump’s comments, which were so radioactive they should burn the suit the president was wearing when he said them.

For a sitting president to make such a claim is foolhardy, dangerous, and even crazy. At the top of this post, I quoted Emperor Palpatine from Star Wars, but Trump is more like Jar Jar Binks, saying anything that floats into the reaches of his mind, whatever the consequences.

The media will certainly respond in kind, and with plenty of curses. That doesn’t help either. We will have two classes of Americans both believing the other side is evil, and that they cheated to win. This isn’t how it is supposed to work.

None of this is a surprise.

Sure, it’s a surprise that Trump took Florida so early, and that Texas was such a cliffhanger. But not a huge surprise. And it’s no surprise at all that Georgia is still too close to call; North Carolina is unbelievably tight; Wisconsin is a pendulum that may swing too far to save Trump; and that Nevada and Arizona are still being counted and not out of Trump’s reach.

As of 7:00 a.m. this morning, the outcome of this race is still very much in question.

We may know the answer today. We may not. It may end up with the Supreme Court, but now that’s much less likely since the president just threw a dart at the Court. It’s well known how Chief Justice Roberts feels about such things. There probably wasn’t anything more damaging to our nation, and the Supreme Court’s independence as a branch of our government, that Trump could have said or done, and now he’ll have to live with a SCOTUS more interested in preserving its own integrity than supporting the president’s view.

To sum up, Trump may be right about everything he said, and he’d still be wrong to say it. But he said it, and we knew he’d say it.

One last word. There may be violence–there probably will be violence. It’s not worth being violent about the outcome of an election. Votes are counted in the most atomic fishbowl imaginable. All across America, election officials do their best in a thankless, merciless, Sisyphean task, to ensure every vote is counted, and that every vote is correctly classified as eligible or ineligible.

There may be one or two bad apples among the hundred thousand good ones, but Trump just made it much more difficult to root those out without throwing out the entire bushel. I voted for him, but I curse him for doing that.

Then again, I knew he would. Trump may yet win this thing, and if he does, God help us all. If he loses, we may need the Lord’s help even more. But right now, we simply need to not harm each other while we wait. I pray we can do that.