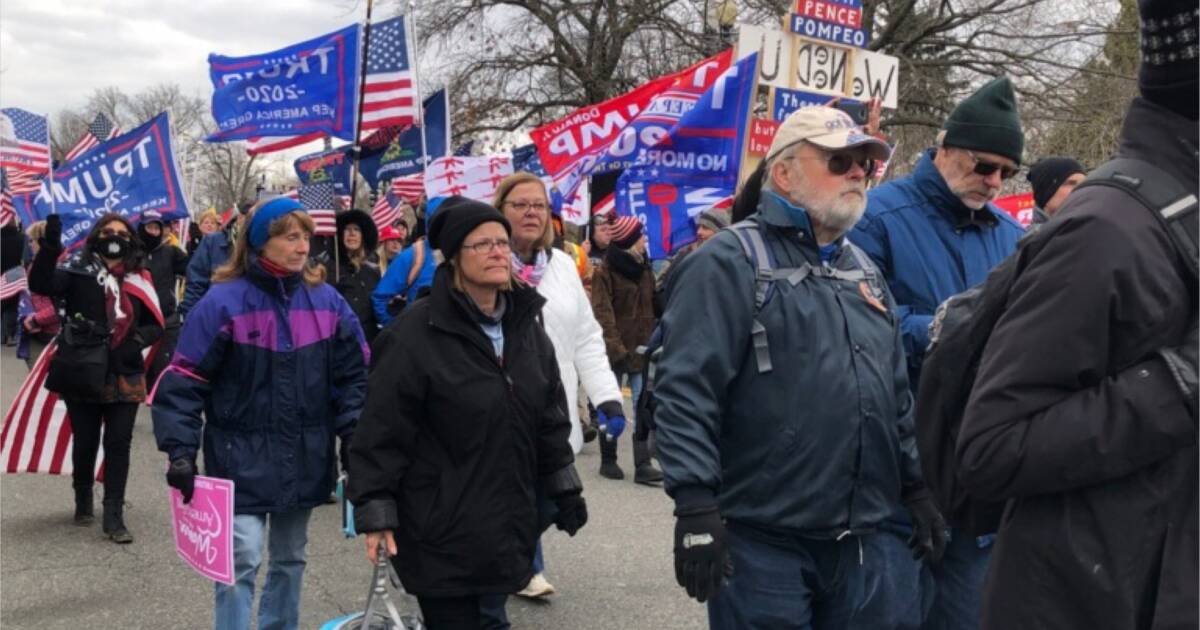 The GOP is in greater danger of crackup, long term, than the squabbling Democrats. Want proof? Thousands of eager supporters continue to gather publicly to hear former President Donald Trump, along with his standard coterie of conspiracy-flingers both inside and outside the government, speak for hours at a time about stolen elections, RINOs and traitors in the GOP.

Trump was in Perry, Georgia, down in Houston County (pronounced How-stun, how dare you say it like the city in Texas!), at the Georgia National Fairgrounds on his “Save America” tour. He knew just what buttons to push in this military county where the slogan of Warner Robins, home of Robins Air Force Base, is EDIMGIAFAD, which means “Every Day In Middle Georgia Is Armed Forces Appreciation Day.”

His wing of the GOP is trying to install its own slate of candidates for Georgia statewide offices. Trump has endorsed Rep. Jody Hice to replace Secretary of State Brad Raffensperger, state senator Burt Jones to replace Lt. Gov. Geoff Duncan (who is not running), and Herschel Walker for U.S. Senate. Trump has not endorsed a candidate for governor, but had not withheld his contempt for Governor Brian Kemp.

Trump blames Georgia for his 2020 loss, but in reality, he lost the race because he let the Biden campaign execute its master strategy, to let Trump self-sabotage with his own mouth and toxic tweets. If nothing else, this rally proves that The Former Guy deserves all the derision that history will pour on him for January 6th. Now, he is simply doing what many believed was always his shtick, a massive Ponzi scheme.

Prior to his Georgia rally, Trump sent a letter to Raffensperger, alleging without evidence that “43,000 Absentee Ballot Botes Counted in DeKalb County…violated the Chain of Custody rules, making them invalid.”

We’re ten months removed from the election, and Trump is using the conspiracies he planted well before Election Day to pump his own Ponzi scheme, filling his coffers with cash from those who want to believe anything but the cold truth. Raffensperger is as discouraged as the rest of us, and despite his own enormous missteps and public relations blunders, deserves to feel that way.

Trump harps on the same disproven and outright false themes over and over, and has enough ears listening to frighten politicians into silence when they know exactly how damaging these lies are. His rallies are sad reproductions of the ones he held as president, with himself being announced as “45th President of the United States.” He’s playing pretend, but charging people for the privilege of hearing him rail against Joe Biden, pushing many themes from his 2016 campaign.

Meanwhile, former President George W. Bush (43), has decided to enter the fray in a fundraiser for Wyoming Rep. Liz Cheney. It’s a Bush vs. Trump battle for the soul of the GOP, and honestly, neither one is equipped or capable of uniting the fractured party.

The fact is that more Republicans are still willing to believe that the 2020 election was stolen than those who accept that it wasn’t. Worse, a majority of Republicans agree that the January 6th Capitol riot “was led by violent left-wing protestors trying to make Trump look bad.” The rally was planned and executed by grifters who are now fleeing like cockroaches in the light of the hacking of domain provider Epik’s privacy shield records.

As the House Select Committee on January 6th’s investigation proceeds, many of the websites associated with “Stop the Steal” founder Ali Alexander will be examined, and some records will be subpoenaed. On that day, Trump sat in the Oval Office with his attorney John Eastman, who wrote the legal fiction memo that would overturn the Constitutional government of the United States in favor of what would amount to a Trumpian auto-coup. Trump sat there hoping that maybe Vice President Mike Pence could be bullied into compliance, so he let the crowds do their thing for four hours.

“In his heart” as Raffensperger put it, Trump knew that his effort was doomed to fail. He didn’t care that hundreds of civilians who breached Capitol security had their lives endangered by heavily armed agents on the floor of the Senate. If not for the courageous action of Officer Eugene Goodman, who led the intruders away from the Senate chamber, they might have broken down the doors and faced a hail of bullets.

Trump didn’t care than over 500 of these people who are now criminals, many of whom had no record, and were guilty of nothing more than believing their president’s words before January 6th, would end up facing serious felony charges. He didn’t care that one, Ashli Babbitt, would be killed. He didn’t care that some teenager from Milton, Georgia, would spend time in prison awaiting trial, and contracting COVID-19, begging the judge to let him go home. Bruno Joseph Cua wrote the judge in March:

“I will never be the same person, jail has had its full effect me (sic), I am completely humbled, deeply remoursefull (sic) and regretful!” Cua wrote. “After all, thats (sic) what jail is for right? Teaching people a lesson? Lesson fully received, your Honor.”

Cua remains charged with multiple felonies and his case is still proceeding, though he was released on personal recognizance. To make matters worse, the followup 1/6 “Justice for J6” support rally was almost entirely a press-engineered farce, where one of the only “arrests” was of an undercover Customs and Border Protection officer, who was legally carrying a weapon. He was not charged.

The reason Trump didn’t care about those people is that they were expendable, and their actions could be exploited to continue the “deep state” narrative and pump his supporters for money in rallies like the one in Perry, held Saturday.

People won’t stop buying what Trump is selling, and they have reason to mistrust the media, who spent four years trying to engineer scenarios, promote outright fabrications, and commit egregious violations of both journalistic ethics and actual libel, to oppose Trump. These deeply disaffected people won’t be moved by facts, because as long as the hated mainstream media promotes those facts, the facts must be rejected.

They’d rather hang their hats on Trump, who is all-in for the money and the recognition. Those who choose to side with the facts will never convince the disaffected that their actions are going to destroy the Republican Party.

This is the main reason the GOP is facing a larger threat than the Democrats. In reality, the AOC wing of the Democrats is a tiny minority with an outsized voice on social media. The policies of the ultra woke Democrats are very much in opposition to general public opinion on matters of law and order, foreign policy, gun control and the power of the federal government to centrally plan everything. Democratic Party leaders Speaker Nancy Pelosi and Senate Majority Leader Chuck Schumer know this. They also know their majority is hanging on by the slimmest of threads, and that President Biden is quickly digging an approval poll grave.

The Democrats will probably lose the House, and could also lose the Senate in the 2022 midterm elections. Some of Trump’s candidates might fill those seats. The Republicans may, come early 2023, own both houses of Congress. Will that help the GOP? I say no.

The Democrats face a short-term loss, which they know and are prepared for. The Republicans face the long-term fracture and death of their own party if the Trump Ponzi scheme is allowed to continue, and rank-and-file Republicans at all levels fail to confront it. If the Trump-humpers are willing to leave the GOP to preserve fealty to their man, so be it. The party will be better off in in the long run.

But you know what? I don’t believe their man, Trump, will leave the GOP. If he ever does, the Ponzi scheme will collapse, and his massive grift will be totally exposed. There will be no payoff, and the resulting lawsuits will eat up the remaining cash that Trump hasn’t siphoned off.

So Trump will stay in the GOP. He’ll continue to press all the buttons of his supporters, keeping his parrot squad with him on friendly podiums, with rapturous crowds shouting “Lock Her Up!” like it was 2016. He will continue to try to silence those who know better but say nothing because they enjoy the privileges of office more than the sting of Trump’s insults and the threats of his core supporters.

It’s treachery, really, because ultimately it will end in the death of the GOP, which is Trump’s party. But Trump doesn’t care, because it’s all part of his Ponzi scheme.