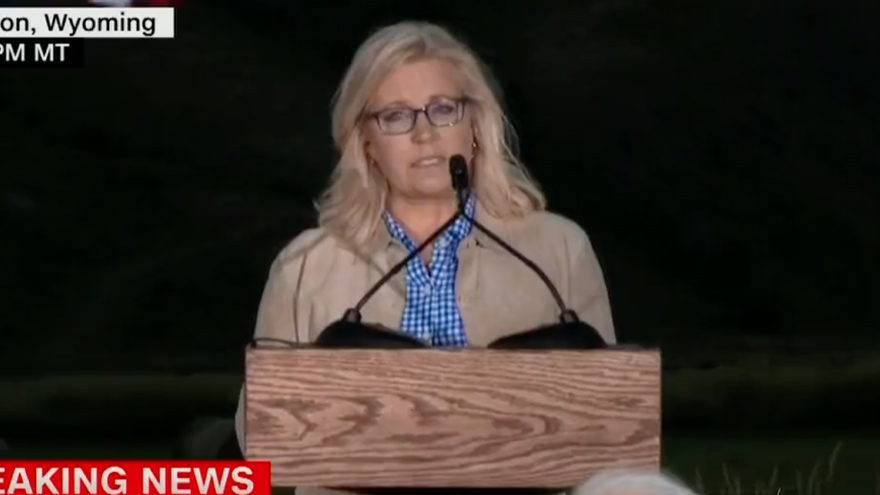 “It’s not theirs, it’s mine,” said Donald J. Trump to Pat Cipollone and Patrick Philbin, his lawyers who were trying to resolve requests from the National Archives for Trump to return sensitive documents stored at Mar-a-Lago.

“We already have the proof,” said Donald J. Trump in a White House post to Facebook on December 2, 2020, after his election loss to Joe Biden. “This election was rigged. Everybody knows it. I do not mind if I lose an election, but I want to lose an election fair and square.”

“It was a catastrophe that election,” Donald J. Trump said on July 26, 2022, speaking to the same audience in Washington, D.C. that would hear Mike Pence meekly admit “we may differ on focus.” Yeah.

“This is not a game,” said Liz Cheney in her sort-of concession speech in Wyoming last night. She left the crowd wit this closing bit: “Join me…against those who would destroy our republic.”

Trump’s strategy to maintain complete control of the Republican Party is moving forward, with Trumpist House seat primary wins in Wyoming and Alaska, where Sarah Palin has marked her return to a general election to fill the late Don Young’s seat.

In some key races, Trump has been repudiated, for example, Georgia, where he’s one for six. But in swing states like Pennsylvania, Arizona, Michigan, Wisconsin, North Carolina and Ohio, it’s Trump all the way down.

Cheney is not ready to give up. She told her supporters “This primary election is over, but now the real work begins.” I am not sure she knows what’s she’s in for, but I think she has a clue.

If we were to take Donald Trump’s beliefs, put them in a pot and boil them down to their essence, I think we’d end up with this simple statement:

Sure, Democrats and progressive social engineers have flirted with violence, and used it to demand attention to their pet causes over the years, from no-nukes rallies, to “give them space” to riot dealing with police brutality in Baltimore. Ronald Reagan, as governor of California, infamously said “If it takes a bloodbath, let’s get it over with, no more appeasement.” He was dealing with violent protesters in Berkeley in May 1969.

Abraham Lincoln was heavily quoted in Cheney’s speech last night, which was mocked by Trumpist media. “Delusions” and “clueless” is how RedState described it. PJ Media wrote that the speech was “mentally ill.” But Lincoln used tremendous violence (even when his generals didn’t want to) to achieve his ends. Cheney told a story about General Grant, who turned his horse “south toward Richmond” after the Battle of the Wilderness. Grant didn’t shrink from great violence.

Donald Trump rose to power because the Republican Party failed to stand up to violence. Trump’s online thugs and petty lawn warriors threatened everyone who disparaged him. Trump encouraged it at his rallies. He doxxed the FBI agentswho participated in the Mar-a-Lago search, knowing that they’d potentially be threatened with violence. (It’s a really bad idea to threaten an FBI agent, by the way.)

These are not the actions of a man afraid to use violence. So I suppose in that regard, you can compare Trump to Lincoln. But Lincoln fought to preserve the Union, Constitution be damned. Trump is fighting, for what? To give white protestant, mostly churchless self-identified “Christians” their due, and the liberal progressive social engineers their comeuppance. The only way to do that is to believe, totally with without restraint, that might makes right.

It’s a powerful argument, like a drug. It’s hard-wired into the human brain that sometimes you gotta take things that belong to you when someone else steals them. And to take things you gotta break a few heads sometimes.

The people who like Trump know that his approach is likely to breed violence, because they feel that the election was stolen, the country was stolen, “we do not have a country anymore” as Trump said in December, 2020. But the alleged fraud was never proven, despite many good-faith attempts to investigate by people Trump himself appointed, and Republicans who ran in alignment with him.

There wasn’t fraud of the kind Trump alleged, and still alleges, but in order to justify breaking some heads, there has to be something stolen to take back.

Trump is putting a cadre in place that isn’t afraid to resort to the kind of violence Abraham Lincoln and Ulysses Grant wrought upon our nation. But instead of preserving the Union, they will split it asunder. No election or transfer of power in the United States has ever—ever—been accomplished through violence. But in 2024, it’s looking like that may not continue.

I don’t think Trump will win in 2024, provided that he runs (I think he’s running). I think he’ll lose, claim victory, and there will be a repeat of January 6th. Except this time, it will be much, much worse. There will be tremendous violence, a bloodbath. I hope I’m wrong, really I do. But that’s where we are heading at full speed.

If might makes right, and “it’s mine” trumps the law of the United States regarding the storage, disposition and ownership of TS/SCI material (which if anyone else who ever signed a government disclosure document or had a clearance did, they’d have a nice view through the bars of their prison cell), then what other laws matter? Hillary Clinton committed a crime in her email server. She did, and it wasn’t prosecuted.

Hillary was and is a self-absorbed, self-entitled, beastly person who treats everyone who can’t give her exactly the ego-inflation she needs at the moment she needs it as walking excrement upon the earth. That’s why she lost. But she never told anyone “it’s mine” about classified material. She didn’t keep claiming the election was “stolen” except in the sense she blames James Comey for losing it (which is wrong). Hillary, as bad as she is, doesn’t believe that might makes right.

Trump believes that might makes right, and that the fact that 70 million people voted for him is enough for him to claim the presidency, now and in 2024. He believes that the force of saying “it’s mine” makes it his.

Liz Cheney was right about the part where she said “this is not a game.” For those Republicans in politics who say it is a game, who have bowed before Trump because they think they can influence him, or gain something from the transactional relationship, or not lose the office, job, or stream of income they enjoy, they’re all in peril. Once the violence breaks upon us, like a wave on the shore, they will be swept up in it and their heads will be broken like the Capitol Police who stood on the steps on January 6th.

Trump always said he was a law and order president, and that “carnage” was something he was going to deal with. But when it came to his own use of violence, those promises meant nothing. Trump’s lawyers who in good faith wanted to work within the law to satisfy the National Archives meant nothing to Trump because “it’s mine.”

Those who in good faith voted for Trump in 2016 or 2020 mean nothing to Trump, because he isn’t president right now. Their lives were in great danger on January 6th, but that didn’t matter. The lives of the FBI agents who entered Mar-a-Lago or the judge who signed the search warrant don’t matter to Trump, even thought he campaigns on “law and order.” To Trump, violence serves his purpose in all cases and from all sources, only to reinforce his will. Might makes right, and whoever opposes will have their heads broken.

Imagine what happens if Trump wins in 2024, implements “Schedule F” and mass fires thousands of mid-level bureaucrats from all over the government. Then he replaces them using carefully curated lists his supporters are already compiling. Then if groups gather to protest, Trump quotes Reagan: “if it takes a bloodbath, let’s get it over with.”

When might makes right, sometimes you gotta break a few (thousand) heads. Just don’t ask for the omelet, because like the stolen election proof, there isn’t one. Maybe, just maybe, Liz Cheney gets it, even if most Republicans don’t.