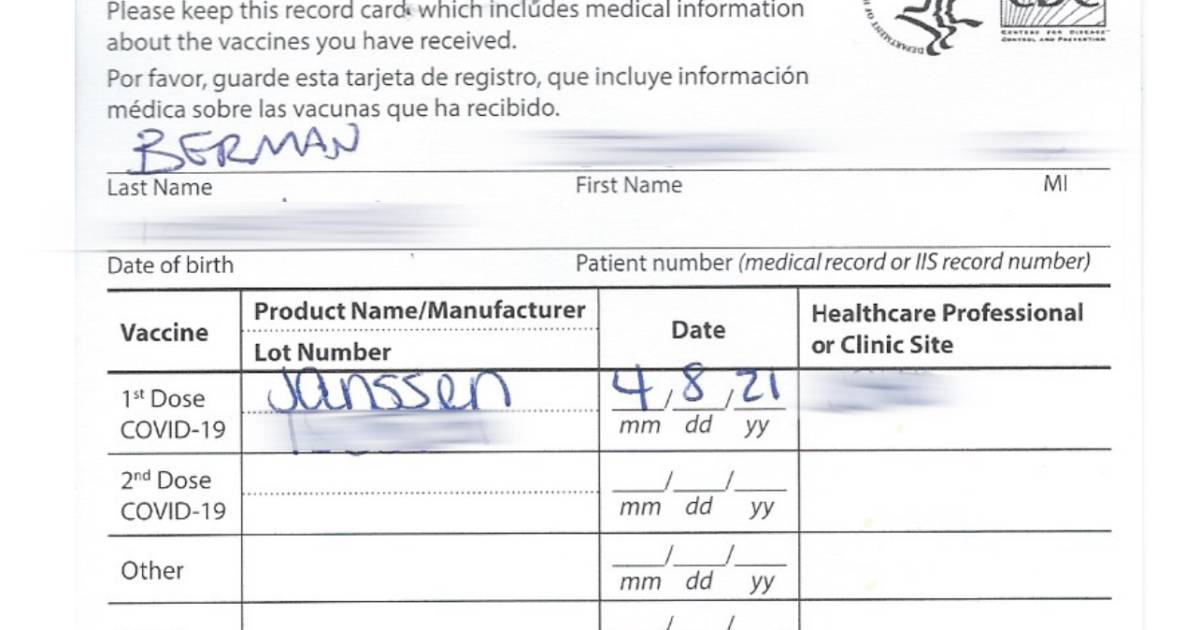 I am vaccinated. I got the Janssen (J&J) “one and done” shot in early April. Add to that the fact that I had COVID-19 in October of last year, and I’d say my chance of having one of those rare “breakthrough cases” and infecting someone unvaccinated is about the same as me driving off a cliff and my car landing on you.

When I received my vaccine, I was given this handy card, filled out in pen. I added my own name and birthdate. I keep it in my wallet, secretly hoping some Karen at Walmart or Publix will dare to question my unmaskedness, so I can whip it out with a satisfying “ha!”

This card, and the scanned copy of it, are the only record I have of my vaccination. I’m certain the State of Georgia’s Department of Public Health has an electronic record of it somewhere, because I registered online. But I’m not 100 percent certain they keep those records in a persistent database. So all I really have is my card.

My employer offered 4 hours of “free” paid time off for anyone who gets vaccinated and provides a copy of the card, so I provided it. There’s no obligation to do it, but the reward is worth it, and the employer gets to keep track of who is and who isn’t vaccinated.

United Airlines is taking a similar tack with a contest to give away a year’s worth of free travel to someone, as long as every entrant provides a vaccination card.

The airline announced a new sweepstake, aptly named “Your Shot to Fly,” giving away round-trip flights to winners and one year-long pass to one lucky vaccinated traveler.

“We’re proud to do our part to incentivize people to get their shot,” United CEO Scott Kirby said in a press release on Monday. “We’re excited to give people one more reason to get vaccinated so they can reunite with friends and family or take that long-awaited vacation which all could be just one shot away.”

The contest is open to any member of United’s MileagePlus loyalty program (those who wish to enter can join online for free if you’re not already a member). Travelers will need to upload their vaccination records to the United app or website from now until June 22.

What the heck, why not? I’ll probably upload my scanned little card to the United website, if I can find my frequent traveler credentials. But, don’t you see the problem here?

The little card is hopelessly, ridiculously, easy to fake. I mean I can use my photo editor—the same one I used to blur my PHI details—to make it say whatever I want. Is United going to plug into every state’s public health database, or the CDC’s database, or wherever to verify each vaccine record? First, I don’t think they can do it because HIPAA privacy and data security regulations are extremely strict. There’s no justification for an airline having a contest to request health records, even if I give them permission on a website.

That leaves the contest wide open to fraud. I don’t know how United will positively vet that the winner of their free year of travel is actually vaccinated versus using a faked card. I suppose they can have that person sign a bunch of affidavits and if they lied, sue them for the cost of tickets, and retract the prize. In that case, they are setting themselves up for the P.R. equivalent of stepping on a rake.

Other airlines are looking at the boogeyman of Republican lawmakers and governors: vaccine passports. Bill Gates (who has now fallen so far from grace that the erstwhile fawning media, his soon-to-be-ex-wife, Jeffrey Epstein’s ghost, and QAnon agree he is indeed the anti-Christ) predicted that some kind of digital vaccination record would eventually be needed, due to the global problems and timeline to get everyone in the world vaccinated.

Indeed, “vaccine inequality” is plaguing nations like India. Poorer countries in sub-Saharan Africa, or screwed-up political nations like Venezuela, or countries with enormous gaps in wealth like Brazil and Thailand face problems far worse than the U.S. and other western modern countries. How is the U.S. going to determine who can come in and who cannot? How will airlines determine who can fly and who cannot?

Nations depending on travel, tourism, and trade all agree that some kind of digital, secure, vaccine passport is the answer. The European Union is testing their own version of a digital certificate.

For Republican governors and legislators, politically, vaccine passports are a kind of third rail. Georgia’s Gov. Brian Kemp just banned state agencies from requiring them. Alabama Gov. Kay Ivey has done the same. Pennsylvania, Texas, and Florida, among others, have various bans and laws restricting the practice. New Hampshire legislators have proposed a sweeping ban that would not only ban vaccine passports, but also prohibit healthcare agencies from even keeping records of which staff members are vaccinated.

I understand that what I call the Medical Administrative State wants to err on the side of extreme caution. Writing in the New York Times morning briefing, David Leonhardt compared the CDC’s outdoor summer camp mask mandate to “staying out of the ocean to avoid sharks.” Giving the CDC and others who are paid to keep us completely and utterly safe at all costs the power to effect and micromanage policy is a ticket to tyranny. But there’s some things that need to be reconciled here.

We have a world that’s working to vaccinate every soul on the planet. We have people who resist vaccination for various reasons, but mostly out of fear and ignorance. We have people who are difficult to reach because of geography and economic conditions. We have others who want/need to travel, or immigrate to other countries. We have airlines who need to get back to business (they are beginning to recover). And we have no positive, secure way (the cards are easily faked) to show who is and who isn’t vaccinated.

If there was a more effective way to create fear and paranoia, and slow the ending of mask mandates and extreme caution than banning any kind of “vaccine passport,” I have a hard time coming up with it.

The politics of masks, vaccines, and now vaccine passports is harming America’s ability to close the door on COVID-19. And yes, people can—and do—still get COVID-19. Some still die from it. I can cite an instance of both just from my social and professional circle, that happened within the last week. Just because most of America can start to breathe again doesn’t mean we’re done.

That says nothing about the next variant, and the next pandemic. If we close off all the options for digital, secure vaccine passports now, because of fear or political blowback, we’re not helping get prepared for the next thing.

Let’s not let the Medical Administrative State run everything, but making this a liberal versus conservative, Blue versus Red issue, it’s clear we’ve let politics cloud our best judgement. Vaccine passports are coming to the world. Eventually, the U.S. will have to fall in line—now, or in 10 years when we have to go through all of this again. I’d rather avoid going through it again. Wouldn’t you?