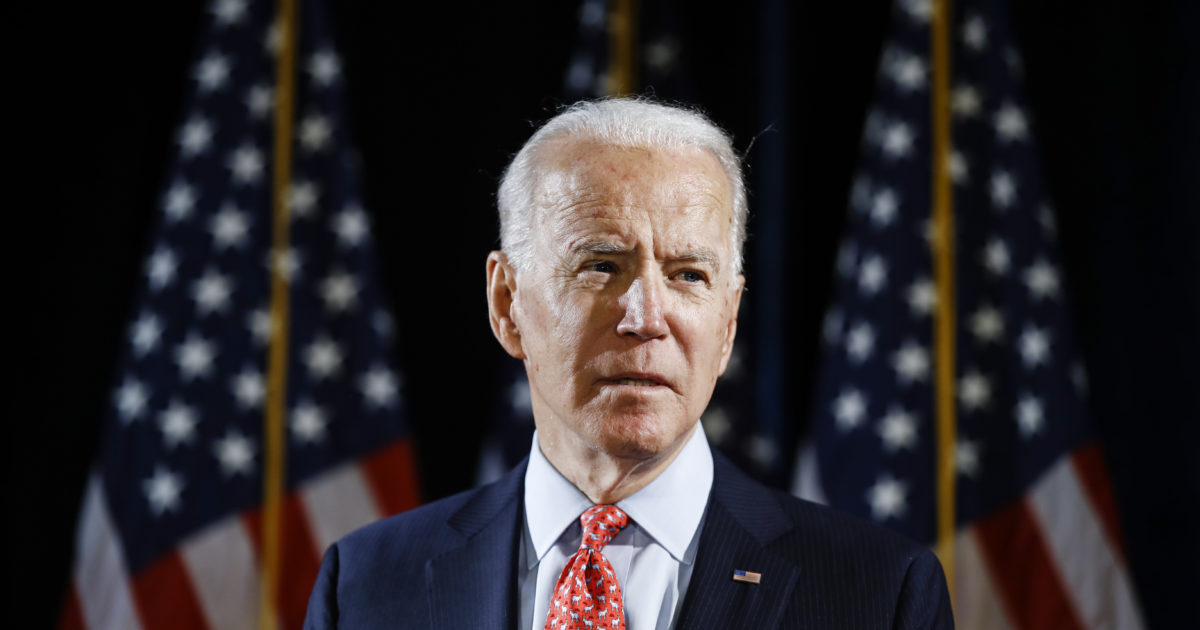 God bless Joe Biden, our president-elect. Even if you believe that the election was stolen, and that President Trump merely has to release the avalanche of evidence of that fact, which he’s been holding until whatever you say is the “appropriate time,” at this point, it’s proper to recognize the reality that Biden is president-elect. The election results will stand as they are, regardless of what you or your Sunday School class may wish or pray for.

David French published a more radical piece at The Dispatch headlined “May God Bless President Biden.” In this, he skips the political hype and presumes the current reality, encouraging the Church to do what Scripture commands. This is a sane and wise path, for living in a world where the mind rejects reality leads to screaming at the sky, becoming a hashtag #Resistance, and all of the other things that made liberal progressives so childishly ridiculous over the last four years.

Biden’s Saturday night speech was primarily aimed at his supporters, and therefore contained buzzwords like “science,” and tropes on climate change and other liberal priorities. However Biden did reach out to Trump voters, enjoining us to give him a chance. Scandalous as this may be, it’s the right thing to do. Christians must give Biden a chance.

Aside from the fact that it’s hypocritical to give Donald Trump a pass on his many sins and character defects, while holding Biden, a believing Catholic, to a strict catechism of the sanctity of unborn life, we as Christians don’t get a choice on whether to forgive our political leaders or not. When the disciple Peter asked Jesus, “Lord, how many times shall I forgive my brother or sister who sins against me? Up to seven times?” Jesus answered “I tell you, not seven times, but seventy-seven times.” (Matthew 18:21-22.)

Christianity is not a monolith, and Christians are entitled to differing opinions in politics and social priorities. We can vote accordingly, some saying injustice and racism are more important than protecting the unborn, and others saying the opposite. Our opinions matter in politics, but we are not entitled to our opinion on the core elements of faith. As Christians, we must accept that these elements have come from God, in whom all Truth resides, and that they have come primarily in the form of Scripture, which is “God-breathed and is useful for teaching, rebuking, correcting and training in righteousness.” (2 Timothy 3:16.)

Scripture is filled with references to forgiveness. In the New Testament alone, there are scores of verses dealing with it. Matthew 6:9-13 and Luke 11:2-4 record the Lord’s prayer, the core of which tells us to pray to the Father to “forgive us our debts, as we also have forgiven our debtors, and lead us not into temptation, but deliver us from the evil one.”

In Mark 11:25, Jesus tells us “whenever you stand praying, forgive, if you have anything against anyone, so that your Father who is in heaven may forgive you your trespasses.” In the epistles, Colossians 3:13, the Apostle Paul wrote, “bearing with one another and, if one has a complaint against another, forgiving each other, as the Lord has forgiven you, so also you must forgive.”

In Ephesians 4:31-32, Paul wrote, “Get rid of all bitterness, rage and anger, brawling and slander, along with every form of malice. Be kind to one another, tenderhearted, forgiving one another, as God in Christ forgave you.” Jesus said in Luke 6:29, “If someone slaps you on one cheek, turn to them the other also. If someone takes your coat, do not withhold your shirt from them.”

Christians do not live in a world where we pray to a fake sky-god, like the secular humanists who screamed at the sky when Trump took office believe. Christians live in a world where God the Father is superintendent of all time, events, and the hearts of leaders. We do not know where the next great evangelist is being raised up. D.L. Moody sold shoes before the Lord touched his heard and lit it aflame to evangelize. Ravi Zacharias received his purpose and commission, as a teenager, during a hospital stay after a suicide attempt.

We know that the enemy of our souls is active here in the world, and especially in the church. The enemy is sowing division, hate, bitterness, unforgiveness, malice, and stubbornness. The unity of the Church depends on faith, love, patience, and the other fruit of the Spirit. Without forgiveness, there can be none of the fruit, and none of the joy.

Ravi Zacharias, rest his soul, delivered a speech on “God and and Academy” at Georgia Tech a number of years ago which was adapted into a text titled “Lessons from War in a Battle of Ideas.” In it, he recounted Mahatma Ganhdi’s opinion on the church. “I like their Christ, and I don’t like their Christian.” Ravi’s point to the faculty and academy in his audience is “We must move forward.”

To move forward, we must not waste time fighting rear-action battles. The Democratic Party is filled with many atheists and secular humanists. The president-elect is a practicing Catholic. What an opportunity to pray for his heart. Scandalous as it is, we must pray for Joe Biden and believe that God has “the heart of the king” in His loving hands.

As Christians, we mustn’t give in to the enemy’s call to disunity. We must forgive each other, and forgive those who sin against us, and those who oppose us, for the enemy is happiest when we become the Christians Ganhdi didn’t like. And the enemy is very active in the Church–in your church and mine.

We have suffered enough division over politics. We have had enough splits, scandals, and fighting over politics, personalities and priorities. There is one overriding priority the Lord has placed upon us, and it is evangelizing for the Kingdom of God. Nothing else is useful to our Great Commission on the earth while we await Christ’s return.

God bless Joe Biden, and all the voters who elected him. And God bless you also.