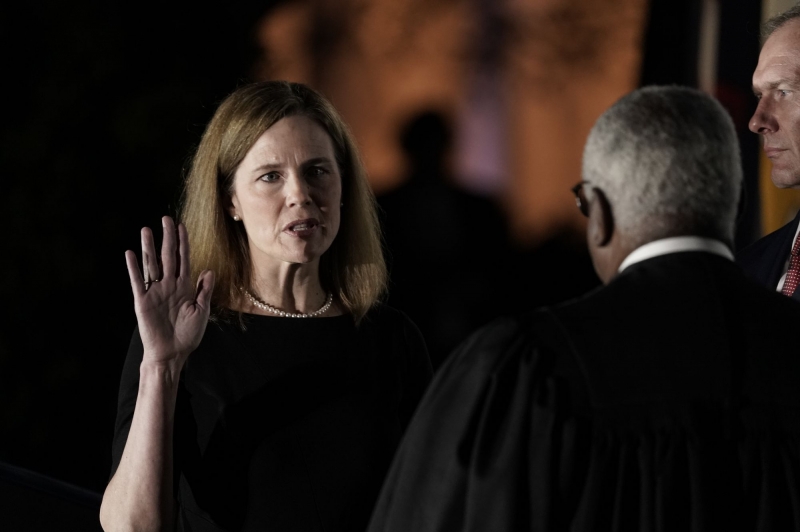 Monday night, a working mother of seven children – five White and two Black – was sworn in as only the fifth female Supreme Court justice in American history. The oath was administered by just the second Black justice to sit on the bench. A few feet away, a Slovenian immigrant – our nation’s First Lady – looked on.

The ceremony was one of the most diverse and high profile events ever held at the White House. You could only surmise that such an occasion would be roundly celebrated, particularly by the “party of diversity” (Democrats, of course) and feverishly covered by the media.

You would be wrong.

MSNBC, the most left-leaning of all the major TV networks, did not cover the ceremony at all. CNN’s coverage focused on the ceremony’s potential as a “super spreader” event. There were no tweets of praise or congratulatory interviews from Democrat politicians. Instead, they bemoaned Justice Amy Coney Barrett as “illegitimate.”

It seems that only true diversity can emanate from the left. Never mind that 50% of the Black Supreme Court justices and 40% of the female ones have been nominated by Republican presidents. The first ever female justice, Sandra Day O’Connor, was nominated by Ronald Reagan in 1981.

The left, and their co-conspirators in the media, promote diversity of countenance, but forswear diversity of thought. To them, a Christian, pro-life woman with “originalist” views of the law is akin to a prairie-dwelling, bonnet-wearing, 19th century homophobic bigot who believes a woman’s place is in the kitchen or the nursery. The same people believe “you ain’t Black” if you support a Republican and that gay Republicans are a “perverse phenomenon” as described in The Washington Blade.

For further evidence of this forked-tongued diversity, look no further than the confirmation votes of a handful of Supreme Court justices. President Obama’s two nominees were fairly warmly greeted by Republican senators. While most voted against them, Sonia Sotomayor received nine Republican votes and Elena Kagan got five. Barrett received no votes from Democrats. In fact, the total Democrat votes for President Trump’s three nominees is one. Ruth Bader Ginsburg, the woman Barrett replaced, got 39 Republican votes. Each of those four women, as well as Justices Neil Gorsuch and Brett Kavanaugh, were supremely qualified, though you could argue that Kagan – without any experience as a judge – was less so than the others. Each was endorsed by the American Bar Association, had distinguished legal careers and was probably the smartest person in the room during their respective Senate confirmation hearings. Yet the fact that virtually all Democrats failed to even consider any of Trump’s nominees, and in fact found some reason to declare each of them illegitimate, paints a vivid portrait of the closed-minded, non-diverse, and downright intolerant views of the political left.

When Senator Tim Scott (R-SC), the lone Black Republican in the Senate, proposed a police reform bill last summer, it was criticized by Senator Dick Durbin (D-Ill) as a “token, half-hearted approach.” Speaker of the House, Nancy Pelosi (D-CA) said Republicans were “trying to get away with murder, actually, the murder of George Floyd,” by drafting the bill. Imagine if Republicans had used that language to describe the work of a Black Democrat.

Rappers Kanye West, Ice Cube, and 50 Cent have all expressed various levels of support for either President Trump or for his initiatives. They have all been hammered by the media and by liberal Hollywood elites, and have been accused of being mentally ill or sellouts.

Surprising as it may be, the Republican Party has gotten a lot more diverse in the Trump era. Perhaps it’s the idea of “anything Trump does must be bad” that triggers kneejerk rejections of his supporters, particularly those who aren’t white men. Yet, Trump is poised to receive greater Black support than almost any other GOP presidential candidate in generations, and with good reason. His historic support of historically Black colleges and universities outpaced the efforts of any of his predecessors. His criminal justice reform, the First Step Act, undid decades of over-incarceration that disproportionately affected young Black males. Aside from CNN’s Van Jones (who is anything but a Trump supporter), virtually nobody in the left-leaning media has praised the President for this work.

The growing support for Trump in the Black community could result in some real surprises on November 3, or whenever the election is decided. Clearly, he won’t get close to the amount of Black support Joe Biden will, but it won’t take that much. If 20% of Blacks support Trump, that could certainly tip the scales in his favor. There are plenty of polls that show he could get to 20% or better, but you have to search for them. You won’t see these reported on the evening network newscasts, where you will see plenty of stories insinuating the President is racist or xenophobic.

Republicans in 2020 are basically saying, “Here’s our platform of political beliefs. We welcome all who can support most of the list.” While Democrats’ messaging boils down to, “If you’re Black or Hispanic or gay or female, you must believe what we believe or you’re selling out your people.” One party seeks to include, while the other prescribes opinions for people based on demographics and chastises them for failing to conform. The media has gladly spun this yarn for Democrats for more than 20 years, but there are signs that the public may be catching on. The irony is that Donald Trump, accused by many of being the most racist President in over 100 years, is the guy who may be starting to dismantle the façade built so carefully by the left. Get the coffee pot ready. Election night is coming.