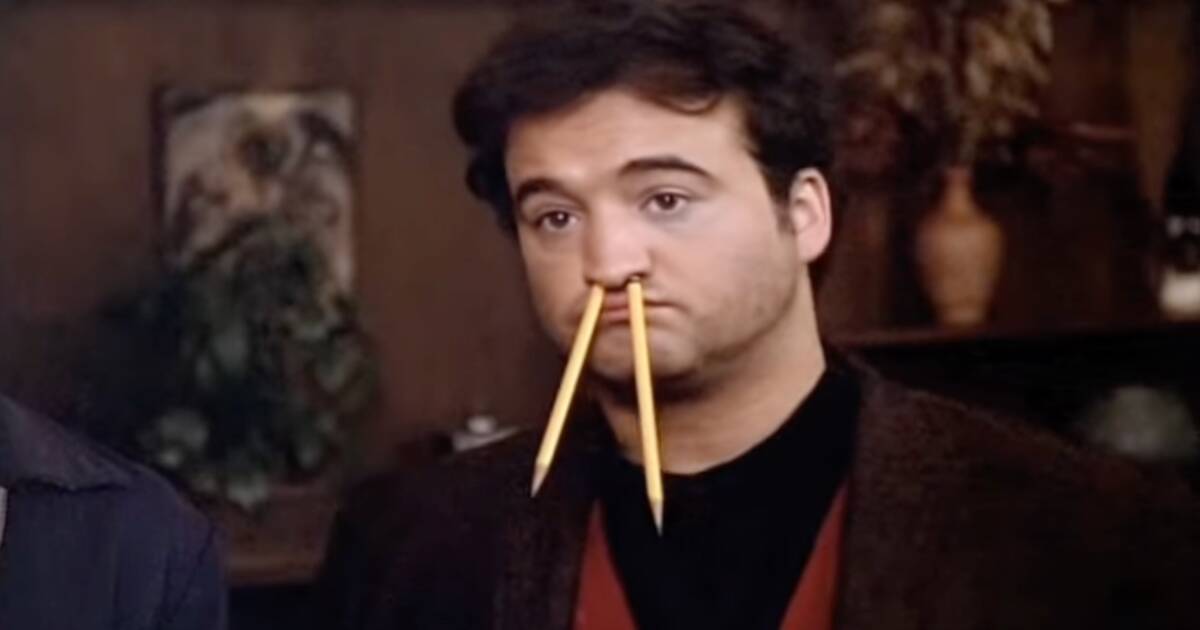 We have become so addicted to our impulse to BELONG to something, that we’ve succumbed to the purely visceral, and let our ability to think critically, and our ability to control our appetites through Reason, atrophy. We are getting exactly what we paid for at the checkout counter.

My estimable friend Kelly Burke wrote two columns offering proof that Alexander Hamilton was in fact a royalist, not a man “for the people,” as the musical portrays him, that is, a royalist as long as it wasn’t King George III on the throne on London but Americans on the throne in Washington (he got his wish). In response, I offered a comment with an analogy to The Hunger Games.

Our pressing need to BELONG to something overwhelms our critical thought processes, and therefore our passions and jealousies are inflamed. We end up replacing President Snow with President Coin. Forgive the Hunger Games reference, but we’re really living in Panem, without the peacekeepers, though they will come, eventually.

Though Kelly liked the analogy, on second thought I believe it was a little too “anti-fascist” for my taste. I know—as Kelly quoted—Thomas Jefferson said “I hold it that a little rebellion now and then is a good thing, and as necessary in the political world as storms in the physical,” I don’t think Long Tom had Antifa in mind when he wrote that. But then again, he might have. Either way, I don’t want to take the chance of contextual confusion, plus I don’t think the people who decide to participate in Antifa are particularly goal-oriented.

A better analogy for me is to get out my trusty metaphor Mixmaster and proceed to juxtapose two ideas so vastly separated by a galactic void of culture and refinement as to offer a good glimpse into the insanity of these days.

Let’s dig in with a reference to one of the best low-budget cinema masterpieces in history.

At the denouement of the classic movie “Animal House,” each character’s destiny is flashed in overlayed text in a freeze-frame moment, which further adds to the bedlam of the movie’s final scene. Now comes Mr. Blutarsky, whose grade point average is “zero point zero.”

His destiny? “Senator and Mrs. John Blutarsky, Washington, D.C.” It’s the crowning achievement of a movie with little positive character arc, no heroic acts, practically devoid of plot, yet one of the most side-splitting, hilarious, and satisfying comedies I’ve ever seen. (And I’ve seen it probably 100 times, many of those events, sadly, before I was 22 years old, and while in states best described as ranging from “mild to unconscious intoxication.”)

The part about Bluto becoming a U.S. Senator is one of the more believable—perhaps after the horse’s heart attack—points of this pointless movie. People like Bluto have a bias to action, without thought, driven by little more than animal impulse. It’s fairly easy for such people to speechify from a position of profound ignorance, and gather supporters, finances and staff to run for office, and to win. This is especially true when the Bluto candidate is equipped with a degree from a top university (pretend Faber College is Harvard, Stanford, or Princeton), and also well-married.

Let’s pretend that Mr. Blutarsky went on from Faber (after some “aggressive grade fixing”) to earn a law degree at Harvard, editing the Law Review, and his wife became a senior partner with some kind of investment bank. Perhaps we might have someone in mind who fits that profile, perhaps not, but I’ll leave it to the reader to guess.

Now I’m going to apprehend this wonderful foray into pointlessness and tether it to earth. Or at least earnestly attempt to do so.

Let’s visit C.S. Lewis in the first chapter of his book “The Abolition of Man,” which he titled “Men without chests.” Here Lewis gets round about to a couple of literature teachers, he calls “Gaius and Titius,” who have smuggled philosophy into a textbook on grammar. Without presenting the entire chapter, know that the lens through which Gaius and Titius filter their teaching is filled with something not relevant to the subject they are attempting to present.

Calling upon the “trousered ape” and “urban blockhead” descriptives, Lewis said that the kind of man these two teachers presuppose could be a “clean sweep of traditional values” so they can start with a new set. However, the bigger problem Lewis exposes is that they’ve constructed “a philosophical not a literary position.”

In filling their book with it they have been unjust to the parent or headmaster who buys it and who has got the work of amateur philosophers where he expected the work of professional grammarians. A man would be annoyed if his son returned from the dentists with his teeth untouched and his head crammed wit the dentist’s obiter dicta on bimetallism of the Baconian theory.

Lewis delivers an essay destroying a post-modern attack on objective values, and virtue without the emotional training and discipline that follow. “I had sooner play cards against a man quite sceptical about ethics, but bred to believe that ‘a gentleman does not cheat’, than against an irreproachable moral philosopher who had been brought up among sharpers,” Lewis wrote.

As the king governs by his executive, so Reason in man must rule the mere appetites by means of the ‘spirited element.’ The head rules the belly through the chest—the seat, as Alanus tells us, of Magnanimity, of emotions organized by trained habit into stable sentiments. The Chest-Magnanimity-Sentiment—these are the indispensable liaison officers between cerebral man and visceral man. It may even be said that it is by this middle element that man is man: for by his intellect he is mere spirit and by his appetite mere animal.

Gaius and Titius position themselves in a way that “he who attacks them attacks Intelligence.” Lewis skewers the post-modernist claiming both that there is no objective truth and that they alone possess the keys to intellectual truth. In reality, they have excised the very thing that makes possible Reason dominating the animal man.

In a sort of ghastly simplicity we remove the organ and demand the function. We make men without chests and expect of them virtue and enterprise. We laugh at honour and are shocked to find traitors in our midst. We castrate and bid the geldings to be fruitful.

Heady stuff. But it all comes down to this in our politics and at our polling places.

Both parties are claiming that elections they lose are rigged, and that the election process is hopelessly corrupt, either by systemic racism and voter suppression, or by ubiquitous ballot stuffing, double-counting, illegal voter registration, and outright computer hacking. But they also claim that elections they win are the rock-solid will of the People and a universal imprimatur upon any mandate that pushed whatever candidate represents the winning party over the plurality line of 50 percent plus a single vote.

Therefore one voter can hypothetically control the entire agenda of a municipality, state, or the nation, but eleven thousand voters should be disenfranchised because of a few hundred spoiled ballots. In this complete rejection of reason, and adoption of the animal responses to loss, we have become no better than the barbarians who eventually overwhelmed the Roman Empire, because they refused to accept a political outcome, preferring to kill their oppressors dead.

We voters have thrown out candidates who hold Reason to be the arbiter of ideas, and adopted petty jealousies, falsehoods, and rock-throwing. We have created men without chests to rule us, and then wonder why we are ruled by trousered apes. We have bought and paid for Senator Blutarsky, but demanded John Adams.

We have elected Marjorie Taylor-Greene over a neurosurgeon. Green won by 10,831 votes over 76,795 cast. Those 10,831 voters decided to promote a woman who flirts with Jew-controlled space lasers, whose business chops consist of marriage to a successful businessman, and whose most considered decision was to move from Alpharetta to Rome, because she knew she could never win in the 6th Congressional District. In other words, MTG wanted to be in Congress, so she went where the voters would put her there.

This is little different from the rise of Alexandria Ocasio-Cortez, who was chosen from among a stable of progressive candidates by the Democratic Socialists, who plowed resources into her campaign in a small geographic area in Brooklyn where Hillary Clinton’s campaign staff hardly left. The voters there preferred a Marxist, as long as the particular Marx she followed wasn’t a Jew (he was). I guess on the issue of Jews, both of these Blutarskys agreed.

But the voters in both instances, and not limited to those places (examples abound), chose the visceral over the cerebral. In both Donald Trump and Joe Biden, we were offered the choice of a rebel against the political class without any ethical boundaries, and the political class itself, filled with post-modern platitudes and empty ideals.

In both choices, we are expected to pick from a lose-lose coalition of men without chests. We are faced with Senator Blutarsky top-to-bottom, coast-to-coast, Blutarskys all the way down. Of course things aren’t that bad, but again, elections are decided by the smallest of margins, and the few thousand voters here and there that decide such elections are feared by those who cling to Reason but find themselves stuck in a spider web of passions, jealousies and animal appetites.

What do they do? Some quit. Some fight. Some lose.

The post-modernists who dominate the Democratic Party’s main legislative priorities consider themselves to be the Gaius and Titius of our times: any attacks on them are considered an attack on Intellect itself—or Science; or Medicine; or Reason. They lack objective truth of any kind but the one they offer because it’s theirs alone to fashion.

As bad as that is, it’s easier to fight than the pernicious spread of pure appetite that has replaced Reason in the Republican Party. Intellect, Science, Medicine and Reason can at least defend themselves though the institutions dedicated to them may be hindered for a time. But raw appetite—Passion and Jealousy—cannot be controlled by any institution other than raw power. The pursuit of that to the exclusion of all else, even in opposition to the post-modernists (who are wrong), is not merely wrong, it’s pointless and, ultimately, evil.

We have bought and paid for Blutarsky politics, and now it’s time to cancel the sale.