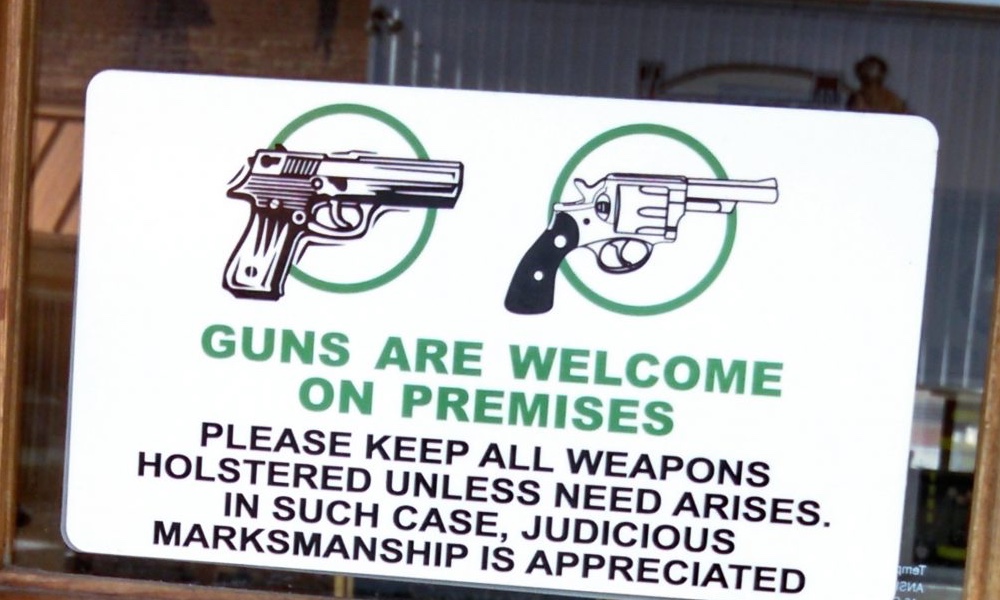 Breaking down the Supreme Court’s decision on gun permits: states can no use a “may issue” policy for carrying firearms; they are now limited to “shall issue” laws. There are only nine “may issue” states according to the U.S. Concealed Carry Association. The SCOTUS decision is about these nine liberal states and their requirement that citizens bear the responsibility to show the government they are qualified to exercise a right enshrined directly in the Constitution. That’s it.

You wouldn’t know it from some of the major news coverage. For instance, The Boston Globe: Supreme Court strikes down New York gun law, threatening gun safety laws nationwide. Massachusetts is one of the “may issue” states.

The 6-3 decision reflects the makeup of the Court, but it’s not a crisis. Gun ownership is also alive and well in New York, California, Connecticut, New Jersey, Delaware, Maryland, Hawaii, and Rhode Island. One state that shares a border with both New York and Massachusetts, the extremely liberal Vermont (home of Sen. Bernie Sanders), has no permit requirement at all—it’s a “constitutional carry” state.

Georgia’s legislature just passed “constitutional carry.” No permit is required to carry open or concealed in most places, but citizens can still apply for a Georgia Weapons Carry License, which offers reciprocal privileges in states that recognize that permit.

The decision was not about gun policy. It was about the proper interpretation of what is a constitutional right, and where the power of government stops. The Court found that “may issue” is an infringement of the Second Amendment, because a right guaranteed in black ink is not allowed to be interpreted as a privilege by the states.

The Senate just passed a new gun control measure that I largely support. In a deadlocked Senate, this bill by necessity was bipartisan. The New York Times reported:

It would enhance background checks for prospective gun buyers ages 18 to 21, requiring for the first time that juvenile records, including mental health records beginning at age 16, be vetted for potentially disqualifying material. The bill would provide incentives for states to pass “red flag” laws that allow guns to be temporarily confiscated from people deemed by a judge to be too dangerous to possess them. And it would tighten a federal ban on domestic abusers buying firearms, and strengthen laws against straw purchasing and trafficking of guns.

It also includes hundreds of millions of dollars in funding for mental health programs and to beef up security in schools.

It’s up the the House to approve this measure, though Democrats may use the SCOTUS decision to promote a “crisis,” and try to insert various vague and unproductive “assault weapon” bans into the legislation. Of course, that will kill the bill, since the Senate exercised considerable effort in crafting a compromise acceptable to enough from both parties to pass.

The House should quickly approve the bill as the Senate passed it, and send it to President Biden’s desk. We need states to pass commonsense gun laws, and remove unconstitutional barriers that prevent responsible citizens from carrying guns in self-defense.

The Supreme Court clearly ruled that all states must conform to “shall issue” on gun permits. This could lead to something I’ve wanted all my life: 100% state reciprocity. One day I would like to be able to drive from Georgia to New Hampshire with my handgun intact, without having to stop, break it down, lock it in a case, and hide it in the trunk to go through New Jersey, New York, and Massachusetts. (And I’m not sure even that’s enough to get through New Jersey legally.)

The fact that states “shall issue” permits to citizens does not change the fact that certain people can legally be barred from purchasing or possessing firearms. States can still prevent convicted felons, people with mental health problems, and children (or even young adults) from possessing guns. The only difference here is that states can no longer arbitrarily require special explanations or training, and can no longer unreasonably delay the processing or issuance of permits. The burden of showing a person ineligible to receive a permit shifts to the government, relieving the citizen of a burden to prove they are.

Nobody should have to prove they are eligible to exercise a constitutional right. The Court ruled correctly. It might inconvenience the nine far-left states with legislators who wish to outright ban all gun ownership, but that’s too bad.

The political problem we now face is if Democrats, as they’ve done the the past, will manufacture a “crisis” from this and use it to kill the good progress the Senate made at the federal level. Red Flag laws are necessary, and must be enforced nationwide, to prevent out-of-state straw purchases. And mental health histories need to be available in background checks. As we say in the computer industry: garbage-in, garbage-out.

If the U.S. Air Force had loaded a 2017 Texas church mass-shooter’s domestic violence conviction into the NICS, he would not have been able to purchase the gun with which he killed 26 people. The state of Texas actually denied the shooter a concealed carry permit because it found the conviction while the NICS didn’t have that record. We need to get our data straight. We don’t need more constitutional infringements to do it.

The Court did the right thing. It’s up to House Democrats to do their part.