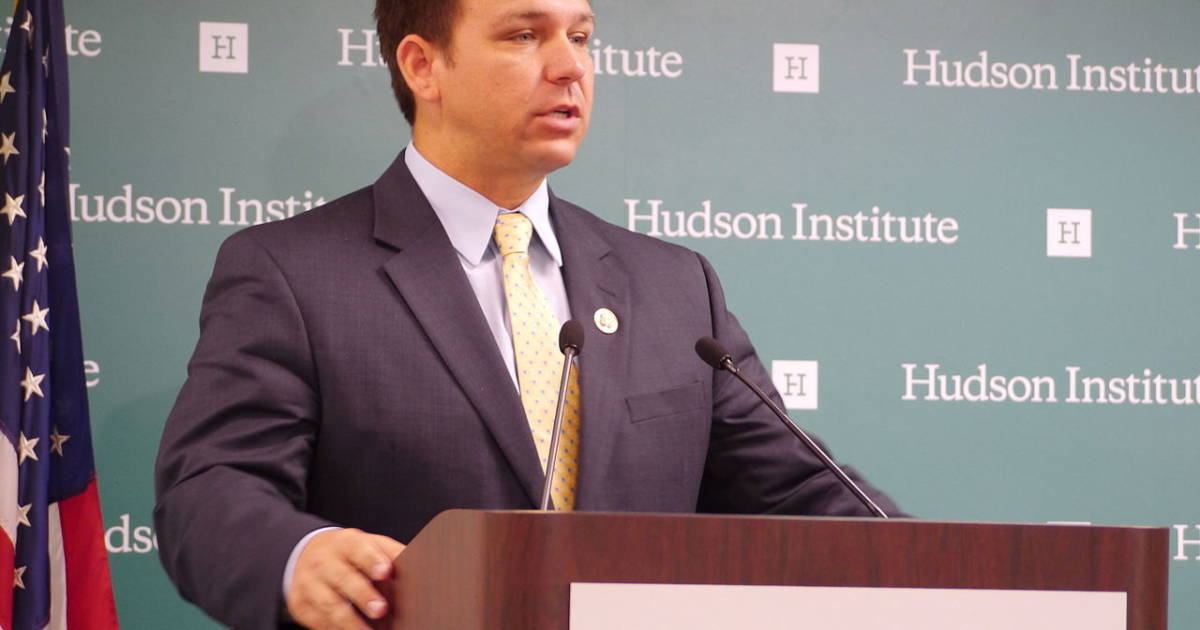 This week Florida Gov. Ron DeSantis signed an important piece of legislation to protect freedom of speech on the internet by limiting free speech on the internet. The word “Orwellian” gets bandied around a lot these days, but claiming to protect the First Amendment while in fact giving the government expanded authority to limit the speech and expression of private companies comes dang close to the textbook definition.

The law at issue is Florida’s Senate Bill 7072, which makes the fundamental mistake of confusing public and private property. In its preamble, the law makes the statement, “Social media platforms have transformed into the new public town square.”

The problem with this statement is that it is demonstrably false. Social media platforms are not public property as a town square is. They are private property that belong to specific companies and not the government or the public at large.

A more accurate analogy would be that social media platforms are the new coffee shops that line the public square. Free discussions and protests can take place in the public square and then the same people might drift into the coffee shop to continue their conversations over a latte or a simple cup of joe, but the rules governing conduct on public property and inside a private business are different. Indeed, the private business has the right to set rules that are much more stringent than the state laws and city ordinances that exercise control over conduct outside.

The fallacy can be summed up in a simple phrase that President Obama used back in 2012 when he noted, “You didn’t build that,” but before you pillory me for quoting Barack Obama, consider that it’s DeSantis who is now taking up Obama’s argument that owners of social media platforms owe something more to the government than what they are currently providing. The implication was that Obama wanted businesses to pay more to the government in taxes while DeSantis believes that social media companies have a duty to provide a platform to politicians and other users.

In other words, DeSantis is telling social media companies, “You didn’t build that. It’s not yours. It’s a public forum.”

Florida law states that social media companies “should be treated similarly to common carriers,” but the fact is that they are not treated that way under federal law, which, as we should have learned in high school civics, preempts state law. Back in October, I described in The First what Section 230 of the Communications Decency Act says.

In short, the law gives internet companies broad protection for moderating content as long as their action is “voluntarily taken in good faith to restrict access to or availability of material that the provider or user considers to be obscene, lewd, lascivious, filthy, excessively violent, harassing, or otherwise objectionable, whether or not such material is constitutionally protected” [emphasis mine]. In other words, Americans have a right to freedom of speech, but they do not have a right to speak on any particular internet platform.

When the Florida law states, “A social media platform may not willfully deplatform a candidate for office” or even limit the reach of their content, it runs directly counter to the federal law of Section 230, but the new Florida statute does not stop there.

One of the most egregious clauses says, “A social media platform may not apply or use post prioritization or shadow banning algorithms for content and material posted by or about a user who is known by the social media platform to be a candidate.” Even if Section 230 did not exist, this provision would run afoul of the First Amendment by forcing private companies to post political messages that contradict their beliefs.

Savvy readers may say, “But wait, doesn’t the Constitution pertain to the federal government, while Florida is a state?”

The answer is both yes and no. While the Constitution was originally aimed at limiting federal authority, several amendments have been ruled to be applicable to state governments through a process called “incorporation.” Both the First and Second Amendments are among those that have been fully incorporated so, even if your state constitution does not protect the right to keep and bear arms, your state government is still prohibited from banning guns under the federal Second Amendment.

The problem that DeSantis runs into is that when the government requires private companies to provide a platform for political candidates or a “journalistic enterprise,” it abridges the First Amendment rights of the private business and its owners. As government expands, freedom contracts.

What the Florida law would do is force American companies to give a bullhorn to speech they find abhorrent. No company should be required to give a platform to Rashida Tlaib (D-Mich.) and Ilhan Omar’s (D-Minn.) anti-semitic posts, neither should they have to allow the rantings of Marjorie Taylor Greene (Q-Ga.) or Donald Trump.

It’s important to note here that, although the Florida law would regulate social media companies similar to how broadcast television and radio stations are regulated, internet companies are treated differently from broadcast companies under federal law. This is because they are different.

Broadcast stations are regulated under the Communications Act of 1934 and the Telecommunications Act of 1966. More stringent regulation of these industries is permissible because radio and television stations use airwaves owned by the public while internet companies do not. Social media companies use privately-owned platforms that are transmitted through privately owned internet service providers. In other words, companies that broadcast over public airwaves represent the public square while internet companies using private infrastructure are not.

The Florida law is almost certain to be struck down because Section 230, as a federal law, has priority. Additionally, portions of SB7072 are blatantly unconstitutional. Social media companies can be regulated differently than they are today, but that would be up to Congress, not Ron DeSantis and the Florida legislature. Ironically, the constructionist judges appointed by Donald Trump will likely be the ones to rule against DeSantis’s law.

Beyond the legal issues is the practical one. I’m old enough to remember when conservatives rightly fretted that a government big enough to give you everything you want would also be big enough to take everything you have. Many on the right have forgotten this concern in the rush to legislate government-imposed fairness on the internet.

Today, the assumption is that regulation of social media will favor those on the right, but this is almost certainly wrong. Given the fact that Democrats control the White House, both houses of Congress, and the federal bureaucracy, any new regulation of social media is almost certain to comprise changes that the right will like even less than they like the status quo.

The Florida law is probably not intended to stand. Ron DeSantis, as a graduate of Harvard Law School, should know that it will not survive a federal judge. The real purpose is probably to pander to Trump supporters who don’t believe that the former president should have been kicked off Twitter and Facebook.

When the law is struck down, DeSantis and other Republicans will preen about judicial activism, censorship, and paint pictures of dystopian nightmares. The entire saga will be bad for the country, but the political theater may benefit DeSantis within his own party.

The Florida law presents an additional problem for conservatives who might consider voting for DeSantis as a presidential candidate in 2024. Any candidate who would present such an unconstitutional and unwise power grab while mischaracterizing it as protecting freedom of speech cannot be trusted with the reins of government. Republicans need to embrace their traditional principles of limited government rather than pursuing the concept of big government populism from a right-wing perspective.

When I look at Ron DeSantis, I think back to Obi-Wan Kenobi (the Sir Alec Guinness version) and want to warn Republicans, “This is not the candidate you’re looking for.”

I had an interesting comment on one of my Facebook pages yesterday. On my recent article about Belorussian air piracy and the kidnapping of Raman Pratasevich, a user named Desree Pether commented with the hashtag, “#freerobertpether.”

I was understandably curious so I did a little research to see who Robert Pether is. It was a story that I had not heard, but one that was interesting nonetheless.

Robert Pether is an Australian contractor who works for a consulting company in Dubai. On April 7, Pether and an Egyptian colleague, Khalid Zaghlol, went to a meeting in Baghdad with the Central Bank of Iraq. The meeting was a setup, reports Australia’s Express Digest, and the two men were arrested as part of a contract dispute when they arrived. (Details on the dispute can be found in this article in the National News.)

Twenty days after his arrest, Pether was allowed to call his family, the Irish Times notes in an article today. Pether’s wife, Desree, said that the Australian government has done nothing to help even though the Australian embassy in Baghdad had assured Pether that it was safe to come to Iraq three days before his arrest.

It appears that Pether has done nothing wrong and is caught in the middle of a high-stakes shakedown by the Iraqi government. There certainly seem to be no criminal charges or allegations that would require indefinite detention. While his situation is an example of what can go wrong when first-world companies deal with third-world governments, it is troubling that the government that is holding Pether is one that many Americans sacrificed their lives and health to install and preserve.

Even though Pether and his colleague are not US citizens, it would be a good gesture for the Biden Administration to intercede on behalf of the two men. The US still has influence with the Iraqi government and could use it here to help two innocent men.

Just as Belorus should free Raman Pratasevich, the Iraqi government should release Robert Pether and Khalid Zaghlol or provide evidence as to why justice requires them to be detained.

Mrs. Pether, if you’re reading this, we wish a speedy reunion for you and your family and pray for your husband’s safe return.