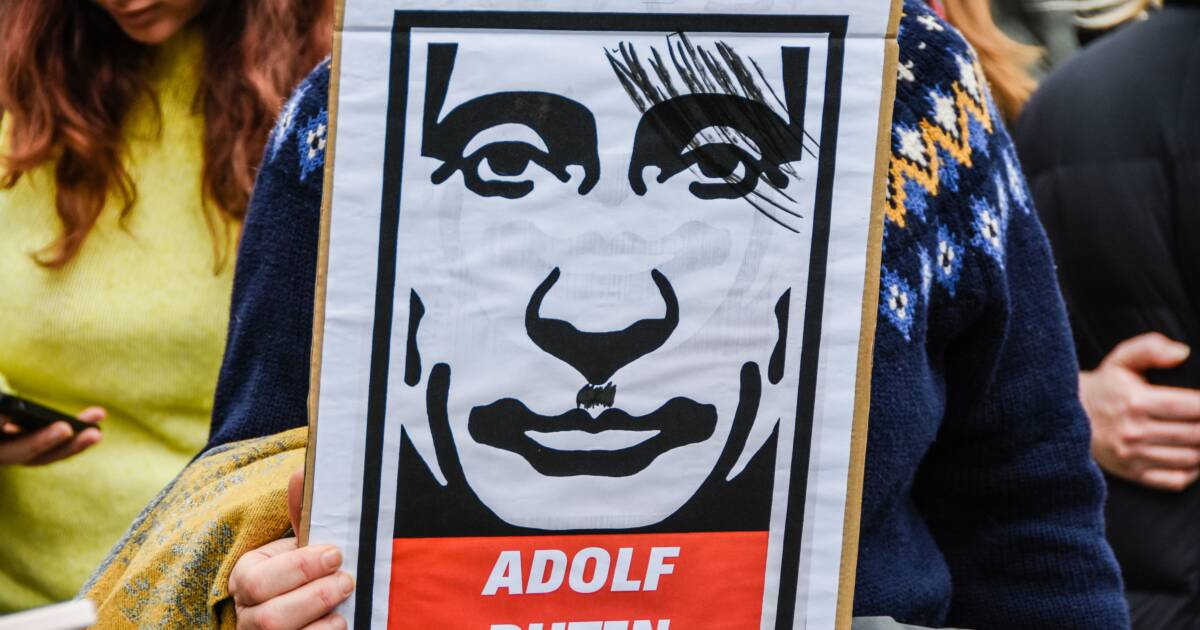 Ordinary Russians aren’t getting the message the world is trying to send. Instead, they’re getting a full dose of Vladimir Putin’s propaganda and disinformation machine. Without access to the “free press” outside their spoon-fed “federal channels” they are being fed the Kremlin’s line, and getting prepped for a massive purge the likes of which have not been seen since Stalin.

Without the technical sophistication of China’s “great firewall,” Putin is relying on the Russian people’s mindset and psychology of opposing the West and standing with him. He’s looking to “bind them” to him as their leader while Russia is being singled out by the U.S. and Europe. The Washington Post reported:

“People who are genuinely supportive of Putin and the Putin government are really unlikely to believe stories that portray Ukraine positively and the same for the West,” [University of Wisconsin graduate student Anton] Shirikov said. “They have this filter that, even if they see this story from their relatives or their friends, they will just reject it.”

Shirikov studies Russian state propaganda, and according to WaPo he compared trying to pierce Putin’s bubble to trying to convince an ardent Trump supporter that the 2020 election was not stolen by President Joe Biden.

When well-known Russian television correspondent Zhanna Agalakova quit her job at Channel One, she told western media it (see video) was because of the war and was interrogated by state authorities for 14 hours. Marina Ovsyannikova, another Channel One employee, walked on camera holding a sign opposing the war which also read “You’re being lied to here.”

Putin has publicly painted such people as “scum and traitors.” In a public speech, he compared westernized Russians (the ones who know the truth) to gnats. “The Russian people will always be able to distinguish true patriots from scum and traitors and will simply spit them out like an insect in their mouth onto the pavement,” he spat angrily at the camera.

The angry dictator understood that his own elites were being coerced by the West, and said he didn’t condemn those who have “villas in Miami and the French Riviera,” but accused them of not “being here mentally,” meaning with ordinary Russians. NBC News reported that this was a direct threat to the elites.

According to [London Chatham House think tank expert John] Lough, Putin was saying to the elites: “Don’t think about having second thoughts. We’re all in this together, and if I go down, you go down.”

The Daily Beast is reporting that Putin is increasingly paranoid and fearful of being poisoned. According to the report, Putin replaced his entire personal staff of 1,000, including food tasters. The fact that the war isn’t going well is not changing Putin’s commitment to destroy Ukraine. A senior U.S. Department of Defense official briefed the press Thursday, saying that more than 1,000 missiles have been launched at Ukrainian cities.

Russian military morale is “flagging” according to the official.

We have anecdotal indications that Russian morale is flagging. Now, I want to be careful here, Barb — we -don’t — you know, we’re not polling all of the battalion tactical groups. We don’t have insight into every unit in every location.

But we certainly have picked up anecdotal indications that morale is not — that – it is not high in some units. And some of that is, we believe, a function of poor leadership, lack of information that the troops are getting about their mission and objectives, and — I think disillusionment– from being resisted as fiercely as they have been.

This disillusionment is not making it back into the average Russian’s living room because only the big cities have enough access to VPNs and the Internet to access Western news. The official news is reporting a special military operation to “denazify” Ukraine, that’s only focusing on military opposition, and avoiding civilian casualties. In fact, the reason being given to the Russian people for the delay in completing the operation is that Ukrainians are trying to use citizens as human shields, and Russian units are holding back to avoid killing them.

I know that’s ridiculous to us, who have seen the footage, but the Russians haven’t seen that footage, and even if they have, how can we persuade them it’s real and they’re being lied to?

One great communicator, Arnold Schwarzenegger, is trying to pierce the Russian bubble. He recorded an amazing videospeaking directly to Russians, about their hearts, their country, and the lies they are being fed. This is good stuff, as good as any speech Reagan ever gave.

The problem is, of course, how to get this message to ordinary Russians, who almost certainly won’t see it. Somehow, someone in the Russian government has to become what Putin calls “scum and traitors.” Putin’s government is taking aim at Russians living abroad who enjoy freedom to be Internet influencers, like food blogger Veronika Belotserkovskaya.

Belotserkovskaya has been charged under Russia’s new “fake news” law, to which she responded, “To find out I was the first one to be charged was both amusing and shocking. I joked that I was officially declared a decent person.” The Guardian reported:

“I am exactly the type of person Putin had in mind when he launched his speech last night. He wants to frame people like me as traitors, the fifth column,” she said from her house in the south of France, where she settled during the pandemic and where she now runs an upmarket cooking school. “I live a good life, post pretty pictures online about food. They now want to portray me as the face of the ‘decadent west’.”

Putin has always had a soft spot for the old Soviet Union—he has always been a KGB man. He has no real love for communism, but truly understands how to be a tyrant. It’s this tyranny, accompanied by purges, executions, gulags, and threats, that Putin is wielding inside his own country. Dividing those who have been fed pure propaganda for several years from those who have tasted the West’s freedoms, and pitting the one against the other, he hopes to crystallize his supporters to do his will and transform Russia into a hermit kingdom, surrounded by a Steel Ring to replace the Iron Curtain.

The Russians themselves have the power to end this war by simply opposing it. When the troops no longer want to fight, and those at home no longer tolerate being told to replace the dead, captured, and deserters in Ukraine; when more and more cracks in the official line fed to rural Russians appear, and when messages from well known and loved celebrities like Schwarzenegger are heard, possibly enough Russians will awaken from their irrational slumber and simply refuse to obey Mr. Putin.

The best estimates of Western Russia-watchers is that up to 30% of Russians oppose the war in Ukraine. Out of that number, only a small percentage have the courage to go to public protests and get arrested, but that’s still a number in the tens of thousands. If it becomes millions, the war will end. Putin himself will end it in order to stay in power.

It will be up to Russians to determine Putin’s ultimate fate. They have the power to either let him lead them into a dark future of paranoia, purges and propaganda, or they can reject all that and him with it. The biggest problem for the West is that Russians don’t know they can end the war. We have to find ways to tell them.