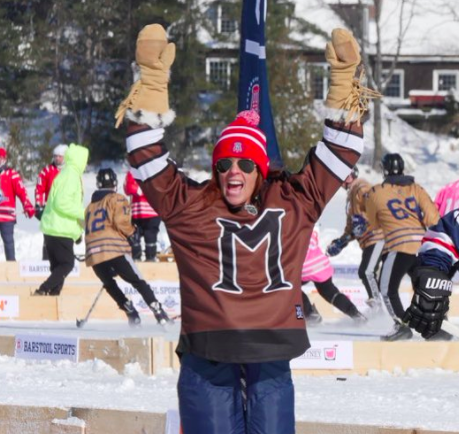 This week’s BCC Interview is with Erika Nardini, who has served as the CEO of Barstool Sports for the last five years.

Nardini and I continued our conversation we started on her podcast Monday, about “cancel culture” and the state of the media – particularly the decline of legacy and traditional media. And then, with all BCC Interviews, I published it in full, below. Check out past BCC Interviews with Fox News’ Greg Gutfeld or Ben Smith of the New York Times, and subscribe to Fourth Watch here. Read the full interview below…

Thanks for doing this! I want to learn more about your career and the Barstool universe, but let’s start with the media landscape more broadly. We’re at a time right now I’ve described The Purge: Newsrooms, where improperly-woke editors are being pushed out for crimes of microaggressions. On one hand, there is the crusty, elitist side of media – where executives and editors earn massively more than their employees, have cushy seemingly-un-lose-able jobs, and enjoy the sorts of perks that make their completely out of touch with their staff. On the other side… is this the right method for making newsrooms more diverse, more representative? Or is this really a case-by-case basis here?

Similarly, I wonder if this just a continuation of the rapidly-expedited death of legacy media. When the business model is built on the whims of social media companies or subscribers who have ever-more power, or even on advertisers who are increasingly frightened by a few dozen negative Twitter replies or a couple bad Yelp reviews – is this just the next step to the end? And, I guess, if you’re the New York Times, or Bon Appetit, or ABC News… is there even a way to stop this, to adapt, to reverse the trends?

Thanks, and feel free to throw anything my way…

At the same time, when a legacy news media brand does cross their path…it’s usually in a not a great light. For example, if you look at your story on NBC and Dr. Fair – the sound-bite that a doctor / NBC Contributor faked Coronavirus (and NBC heavily promoted it) because it furthered the Coronavirus hysteria (which contributed to increase in ratings and views) is going to travel exponentially farther and faster on social media than any general or generic NBC story.

So, in this case – instead of watching NBC, following NBC or caring what NBC thinks – what young people see are the hypocrisies and sensations coming out of the newsroom at NBC, (which frankly NBC would prefer you NOT know about) because that content plays much better in the places where the majority of people spend their time.

In my opinion, while legacy media understands that they can no longer control what you see and when you see it – they still wish they could. It’s taken too long for their organizations to really grasp the revolution in content. The ethos of these companies and the institutional knowledge and leadership within them hasn’t come to terms with a few facts:

– There is more choice in content than ever; the volume of accessible content is higher than ever
– The ability to create content is easier than ever
– What happens behind the scenes is as important as ever and sometimes even more interesting as the content itself.
– The conversation – which typically the consumer NOT the news organization creates and controls is what creates engagement and traction.

Traditional media likes things neat and tidy. The world is not neat and tidy. Neat and tidy is boring and will be ignored. Coupled with cord cutting, the power of advertisers and rights holders to dictate editorial (and would like the edit to be as safe and boring as possible), and the staffing models of these organizations (most of which are extremely bloated), makes for tough going.

As for the newsrooms themselves – it’s hard to say what goes on in somebody else’s newsroom. Newsrooms are part of a business – I think sometimes people forget that. If you work in an editorial department – yes, your job is to make content but you are also part of a business. Good businesses want to evolve and grow and strive to be better. Sometimes I feel like we’re in an era where any type of feedback, any type of criticism or suggestion for development – is met with some type of “-ism.” I think that’s bad for people. If no one can get pushed and nothing can be criticized, nothing evolves and no one gets better.

Yeah, that NBC story is an odd one – and look, I don’t know if he faked coronavirus or had coronavirus, but I know there is most certainly a story BEHIND the story, and as you say, the legacy media structure is incentivized to suppress that rather than embrace transparency. So, we’ll see how it plays out.

What you say about the “-isms” newsrooms are dealing with is really interesting, and as you note, driven by younger people – a new generation. That said, I’m curious about Barstool, because you are the CEO of a company that is, largely, filled with young people also. I’m going to avoid the “woke” term here – but do you get a different vibe from the young people that make up Barstool then maybe what we’re seeing in the broader media landscape? A certain openness to other points of views, or even just an openness to dialogue and discussion rather than demands for silence?

And here’s the time I want to ask you about YOUR career… tell me about what drew you to the role at Barstool? What work in your past – from exec roles at AOL and Yahoo and others – has played a part in what you do here on a regular basis, and what has surprised you about the role in your 4 years in the role. For people that only casually know of Barstool Sports, what do THEY not know?

Who cares is my point.

We have a rowdy content group at Barstool: Highly entrepreneurial, deeply creative, very individualistic, most everyone is a self starter and self created. There’s a lot of people who want to create here and the ones who do are pretty great. We have a lot of weird brains.

We don’t have a lot of the trappings of traditional media – we are far more open and far more hands off. If you come to Barstool as a content / creative person and expect that someone is going to tell you what to do and when / how / where to do it, you will not last long. We also aren’t professing to be journalists. We are trying to entertain people and make them laugh.

This is a very noisy place. Very hive like. Lots of different characters and fans constantly making things and talking.  We’ve done a good job of finding really talented people on the internet and pouring gasoline on them right help make them stars. When you want to break out and be big, there’s not a lot of time or room or appetite for silence. Sometimes the best way to grow is to have something to react to; something to push up against. Hard to do that if everything is the same.

In terms of my career – I’ve been here almost 5 years. It’s been awesome and hard and at moments exhilarating and others, terrible. All that said, I would say in retrospect that I’ve loved every second. This has been a chance and an opportunity of a lifetime.

I came because I thought Dave Portnoy and the early Barstool team was brilliant, I thought what he built was meaningful and I knew how different and special and rare Barstool was because I was a fan. I also knew I had been places they wanted to get to and I had the energy and the stamina to figure out the rest with them. We’ve grown a lot these last few years, learned a lot, done a lot, succeeded and failed a lot. We have incredible talent and incredible fans. We are building a media company of the future. I think most people don’t see how much we care, how hard we work, how disruptive and fast we are, and how willing we are to experiment, and how badly we want to win.

I do think what you and the team at Barstool have built that’s so important is the fanbase. Awhile back I interviewed the executive producer of Jimmy Fallon’s show back when he hosted “Late Night,” and he said something that I thought was really important – he said they didn’t want to build a show a lot of people liked, they wanted to build something that some people loved. I think that’s really the only way to go in media right now – whatever you are, be that thing so well and so consistently that it turns off the people that don’t want to be there anyway, and builds that brand affinity. And as I said on the podcast, I absolutely love the transparency too… so rare.

So, what do you think comes next in the media? It seems the podcast space is starting to really explode, with some making real money on it. Is there room to keep growing there? Is it TikTok? Is it something else?

Last thing – can you tell me someone in the media space, maybe on Twitter, that people may be surprised to know you love or really admire? And how about someone that’s just coming up – maybe someone people should keep an eye on for big things in the future…

Thanks for doing this, stay safe and sane in this crazy time…

I agree with that. If you try to please everyone, you will convert no one. I think that’s the essence of the problem right now in mass media, advertising and consumer brands – you can’t please everyone. The more you try the worse off you’ll be. At least in entertainment and sports media, the more you try to please yourself and your core fans, the better off you are & the stronger your audience and brand will be.

I think the future of media will be rooted in personality and point of view. The majority of “stars” will come from non traditional places (not thru mainstream media). The faces of entertainment / lifestyle media are going to come from social.  Look at Charli D’Amelio on TikTok. She has ~60m followers, she’s not yet 18 and she’s made less than 2,000 videos. She has 20m followers on Instagram and under 800 posts.  Think of how much potential, growth and upside there is for her right now.  It’s not apples to apples but comparatively  – E!News has 20M followers and 26k posts on Instagram. Think of the cost differences, the business models and the growth of a brand like Charli and a brand like E!  There’s no question who is going to win. Brands / personalities like Charli will grow to other mediums – long form video, tours / live events, podcasts. I think this is what’s exciting in media right now.

Thanks for including me. Erika