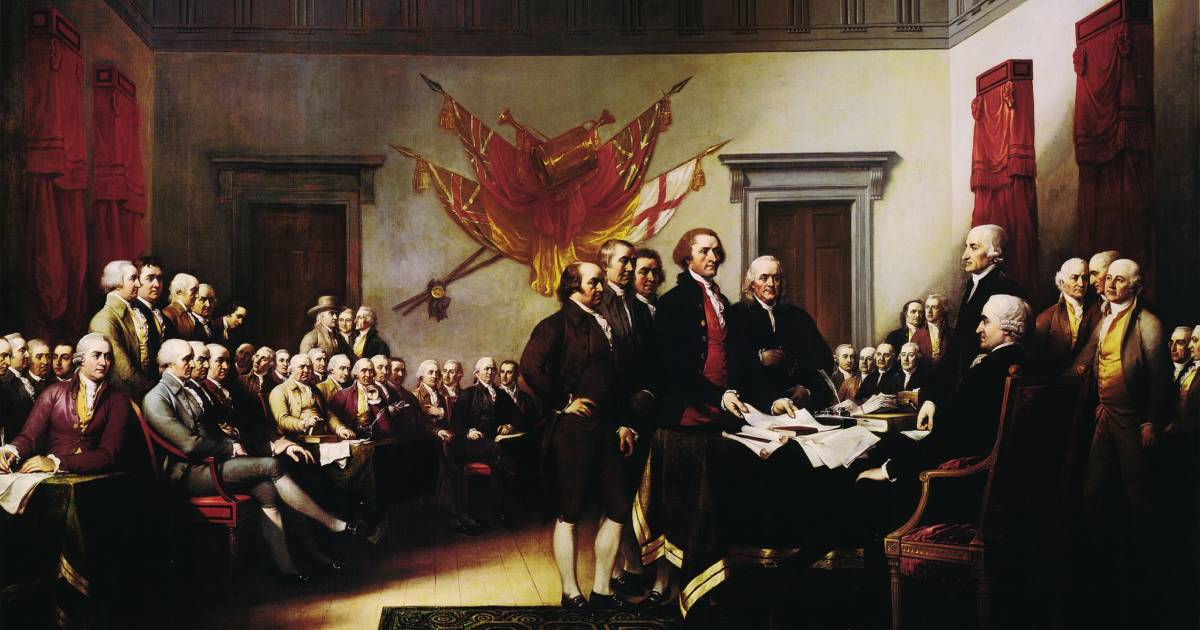 I saw a friend today, a Brit, wearing a simply wonderful T-shirt that read “Happy Treason Day” above a Union Jack. Under it, signed “We Grateful Colonials.” I love it. I hope you’re enjoying your 4th of July, and get tomorrow off work. If you have a spare moment between the grill and the fireworks, enjoy some fun history, and the power of a lone dissenter’s voice.

Fifty-three men who were in the room on the fourth of July, 1776 signed the Declaration of Independence. They had all, by signing, admitted the treason against the British crown when they approved the document.

One man whose dissent very nearly killed the effort, never signed at all. Pennsylvania delegate John Dickinson loudly opposed independence from the crown. In the end, Ben Frankin and James Wilson voted over Dickinson’s objections, carrying the measure to approve independence as unanimous. Well, almost unanimous.

New York’s delegates were given “standing instructions” to abstain on all votes. They abstained on every vote, and never even offered debate, despite delegate Robert Livingston’s membership in the committee that drafted the document. Historians record that after New York’s 29th abstention, a frustrated John Hancock grew so apoplectically angry that some present thought he was actually experiencing a stroke.

New York never voted in favor of the Declaration of Independence, though one of the signers contributed to the nation’s birth by his absence. Westchester County judge Lew Morris (ironically the only delegate who ever spoke for New York, and then only when voting) was not in Philadelphia on July 4th. He was in White Plains at the Fourth Provincial Congress, where on July 9th, the colonial body released New York’s delegation to the Continental Congress from their “abstain” instruction.

But it was Pennsylvania’s John Dickinson who held out against independence “under any circumstances.” The Pennsylvania legislature must have advocated torture, because they sent two of the most opposite and obstinate men they could possibly have found to represent their people in the most momentous decision of the colonies’ history. Benjamin Franklin, with all his knowledge, celebrity, and worldliness, was paired with the farmer and businessman Dickinson, whose ears were closed to all arguments.

I can only imagine the long-winded tedium and petty drama when Dickinson would speak out against independence, drawing exaggerated yawns and walkouts from John Adams, who would then, in similar long-winded fashion, speak against Dickinson’s points, must have driven those unfortunate enough to be in attendance that hot Philadelphia summer to feverish dreams of bloodshed (of their own members).

If you have the opportunity, watch the film version of Peter Hunt’s Broadway play “1776.” Though the songs are somewhat forgettable, the history is largely accurate. Adams was, by most accounts, even from his own wife, “obnoxious and disliked.” Hunt’s treatment importance of Pennsylvania’s vote comes into sharp focus after all the drafts, the issues of slavery (which was kicked like a can down the road for a future war), and the unequal tyranny experienced by various colonies, were finally resolved.

Pennsylvania delegate James Wilson’s vote was so reliably in lockstep with Dickinson that historians have said Congress could determine how Wilson would vote without his presence in the room, simply by asking Dickinson how he is voting. Yet in the final vote to approve the Declaration of Independence, Hunt’s play shows Wilson’s conundrum.

Don’t push me, John. I know what you want me to do. But Mr. Adams is correct about one thing. I’m the one who’ll be remembered for it.

DICKINSON: What do you mean?

DICKINSON: Yes, well, whether you want it or not, James, there’s no way of avoiding it.

WILSON: Not necessarily, John. If I go with them, I’ll just be one among dozens. No one will ever remember the name of James Wilson. But if I vote with you, I’ll be the man who prevented American independence.

James Wilson got his wish. Nobody, outside of pedantic history buffs and playwrights, remembers him today. He signed among what the New York Times in 1996 listed as the “truly great leaders” of the revolution, along with John and Samuel Adams, Hancock, Franklin, and Virginians Thomas Jefferson, Richard Henry Lee (who introduced the measure to approve the Declaration before the 2nd Continental Congress) and George Wythe. Quite high company for an unknown man.

He was the name behind the nom de plume “Fabius” (after Roman general Quintus Fabius Maximus Verrucosus Cunctator, the original guerrilla warrior), in a series of essays in favor of the U.S. Constitution which rival Alexander Hamilton’s Federalist series in their breadth and influence.

In answer to those who fear that the Constitution would eventually lead to despotism, Fabius suggests that two features of the proposed system make any such eventuality highly unlikely: “the power of the people pervading the proposed system, together with the strong confederation of the states.” So long as these features are reserved, he says, “the question . . . will be—not what may be done, when the government shall be turned into a tyranny; but how the government can be so turned?”

These are hardly the words of a royalist. In fact, Dickinson’s opposition to independence was born of prudence and restraint, which were also his guiding principles in supporting a Constitution which sought to limit the power of the federal government and simultaneously strengthen the bonds between the states, while reserving the real power to the people themselves.

It was this reservedness and desire for careful, considered action versus a bloody confrontation which Dickinson (as well as his fellow delegate Wilson) believed the fledgling Continental Army could never win against the global superpower there were fighting.

Dickinson’s persuasiveness to his compatriot Wilson, and his direct opposition to fiery voices like John Adams, set the stage for Wilson to take the road to anonymity, and also plunging America into the war that, up until July 4th, 1776, was simply a colonial rebellion, and from that day forward, became a nation fighting for its existence.

One final thought. At best, under half of Americans at the time the Declaration of Independence was approved by Congress were patriots who were willing to risk life, limb and treasure to achieve a break from the British monarchy. Another 20 percent were Tories, including William Franklin, son of Ben Franklin, to the latter’s great consternation. The rest were noncommittal, granting passage and commerce to both sides, depending whose horses were passing through.

There wasn’t some great unanimous wave of support for the revolution, but once the war was engaged, those whose lives and fortunes were tied to the prosperity and success of the American way of government, our “experiment” with democracy, were firmly in the camp of the patriots.

What’s interesting to me is that the voice of the lone dissenter was important, even instrumental, in the final passage of the measure. What the Continental Congress did not have was the enemy of good, rational, critical thinking everywhere: groupthink. John Dickinson ensured that the dissenter’s voice was heard, though in the end, the urge to go along was unstoppable.

Remember John Dickinson and James Wilson the next time you hear political friends discussing how some Member of Congress should be silenced, expelled, or removed from committee. Or when some unpopular idea is thought so toxic that it should be censored and removed from discussion in the public square. Better to let the voices be heard, and, with prudence and mutual affection, as Dickinson believed.

Let me end by quoting the dissenter, who, if he won the day, would make our July 4th just another day on the calendar. I think Dickinson, who never signed the Declaration of Independence, would be glad if we remembered him for this instead.

We are not forming plans for a Day, Month, Year or Age, but for Eternity. Let us endeavour with united Councils to establish a Government that not only may render our Nation great, respectable, free, and happy, but also VIRTUOUS. Let us try to combine political Establishments with moral Virtue, that if possible the first may be equal with the Duration of this World and an aid, or at least not a Hindrance, to the Enjoyment of another.”