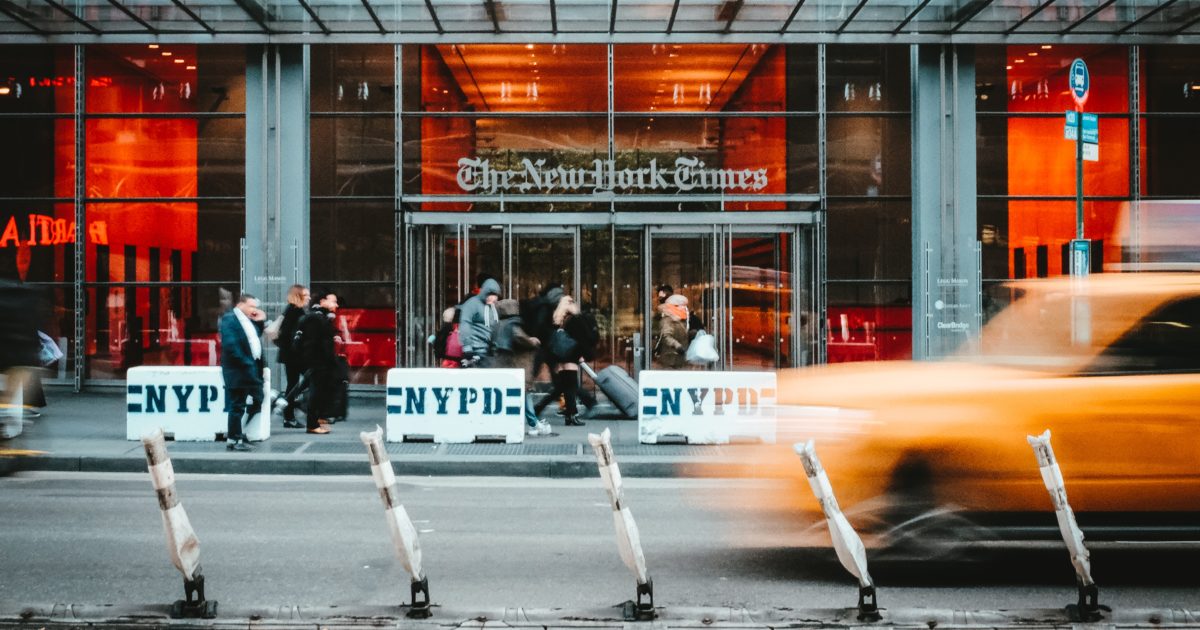 The New York Times has joined the serving line at the smorgasbord of wingnuttery following President Trump’s COVID-19 diagnosis. First, they played “asking for a friend” (Liberals Ask: Why Should We Believe Trump Has the Virus?). Then, they threw their analysis onto the heaping pile of conspiracy corn flakes: Trump’s Covid News Meets a Landscape Primed for Mistrust.

Waking up on Friday to the stunning development that the president of the United States had tested positive for Covid-19 after months of downplaying the virus, some Americans had a similar reaction: Maybe it’s not true.

“I don’t believe it,” said Anthony Collier, a truck driver from Atlanta. “It’s like he’s trying to get sympathy.”

There is no evidence, of course, to support the view that Mr. Trump and his wife, Melania, are anything but ill. As updates on the president’s condition came in, followed by the news that he would be hospitalized, the chatter turned from skepticism that the president was sick to doubts that the White House was being forthright about his condition.

“Of course.” But it’s worth the ink in the nation’s newspaper of record to dig up the opinions of random truck drivers in Atlanta who think Trump faked a case of COVID-19 in order to get sympathy from people who wish him dead from it. This is, in every respect, madness. The editors at the Grey Lady who allowed it to be published should never work in journalism again. But of course, Trump sells newspapers (a lot of newspapers), and conspiracy theories about Trump is compelling fan fiction.

Trump himself is a master purveyor of uncertainty and conspiracy. His White House staff is kept like a crop of mushrooms: in the dark and fed fertilizer. The entire public relations operation of the White House can be summed up as an amateur effort at promoting Lucha libre. It’s Kayfabe, badly done.

Take, for example, the pictures released through the AP of Trump “working” at Walter Reed Medical Center. A few photography geeks have sought the “EXIF” meta-data on these photos and proven, “beyond the shadow of a doubt and with geometric logic,” that the photos were faked, or at least badly staged.

It doesn’t take a genius to realize that sitting and signing papers is not what Trump does–either inside or outside the White House. If the photos had come from the West Wing itself, I’d be skeptical and easily believe they were badly staged. In fact, I believe the president has not altered his daily schedule one iota at Walter Reed from what he did at the White House. It’s 12 solid hours of “executive time,” which consists mainly of lots of television-watching, website clips that feature him, and endless binges of scrolling through Twitter.

Yet, the misinformation machine churns on.

Oh, and this one.

Coins commemorating “Donald Trump defeating Covid” on sale from an online outlet called the White House Gift Shop have no connection with the US President.

Much-shared but false posts on social media suggest that President Trump is selling the $100 (£77) coins to make money on the back of his diagnosis.

Is the president really sick? Yes. How sick? Based on his appearance, it doesn’t look like he’s at death’s door. Based on his doctors’ statements, he’s doing fairly well. But remember, Trump is a patient, and patient privacy laws are in effect. The doctors can’t say anything to violate HIPAA. To require them to do that for the sake of “transparency” is to ask them to break the law.

My question isn’t if Trump is sick, but is the media that covers him sicker? They have consistently taken the president’s bait and lowered themselves into ever-deepening muck, and now they’ve taken up the mantle of QAnon-style reality denial.

The mainstream media has feasted from the smorgasbord of wingnuttery, and then claimed the meal was only “tasting the food for a friend.”

Let me tell you the difference between Trump and his media enemies. Trump lies for a purpose. His media enemies lie while pretending to tell the truth, then blame Trump for making them do it.