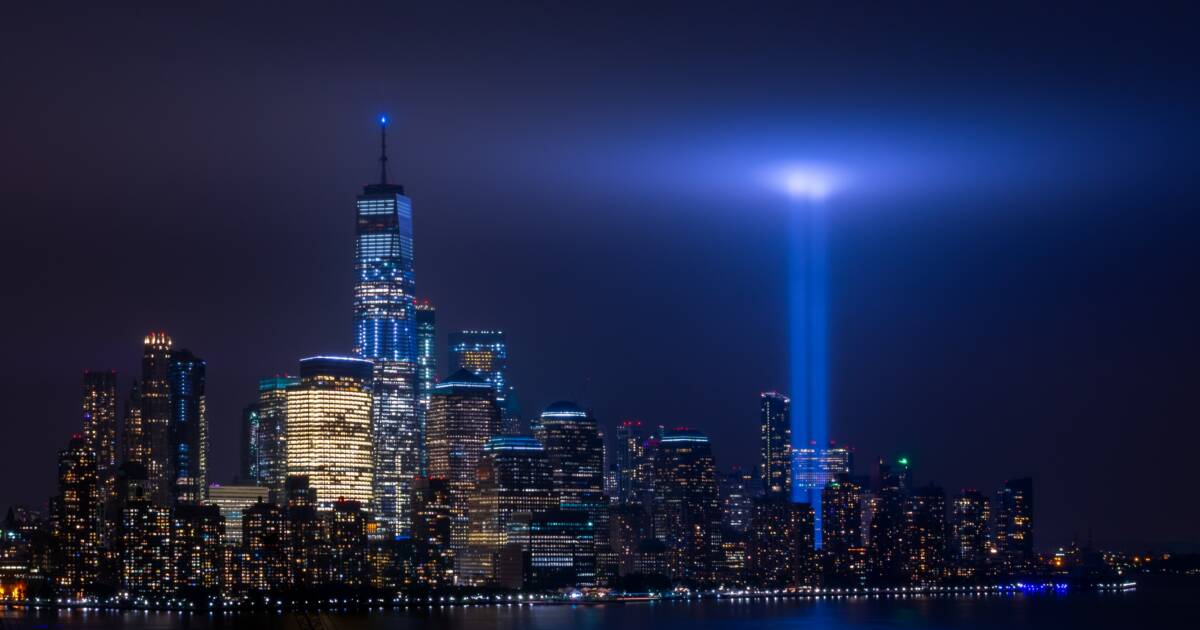 Some lessons are quicker than others. It took Americans two hours and four minutes to learn. That’s the time separating American Airlines flight 11 takeoff from Boston and the crash of flight 93 in Shanksville, Pennsylvania. We learned that hijackers can’t be assumed to offer a bargain for the lives of passengers. And now it’s unthinkable that any hijacker would be offered the opportunity to try.

It took a lot longer for Americans to learn (if we indeed have), that though the kind of steel used to structurally support the exoskeleton of the twin towers melts at 2,777°F while the temperatures inside the inferno of jet fuel that bathed the buildings didn’t exceed 1,472°F, the building collapse was not a hoax to cover up some nefarious plot that didn’t involve jets hitting towers.

Engineering facts are not open to personal opinion: the steel angle clips that held the floor joints in place lose 50 percent of their strength at 1,202°F. Once one set of clips failed, all the floors above it fall onto the floor below, and a cascading failure results. The buildings did not fall sideways because it was physically impossible for them to collapse in any direction but straight down. This was known and documented within a month of the attacks.

Yet there are still likely many thousands of people who continue to believe that the towers fell for some reason other than the burning of 23,775 gallons (over 75 tons) of jet fuel. Nothing will convince them, if the engineering facts can’t.

In April, 1999, two high school boys massacred their classmates at Columbine High School. After 23 years, Americans have not yet learned how to prevent these kinds of tragedies. One survivor, Craig Nason, wrote an essay this June about gun violence. We have finally taught some lessons, but haven’t arrived at an answer we can agree on. Yes, taking away everyone’s guns would stop gun violence, just like taking away everyone’s cars would stop car accidents. We ignore one problem while making others worse—like mental health. We haven’t yet learned the lesson of Uvalde—that police are people, and have the same failings as the rest of us.

For years on his media platforms, Alex Jones spread a terrible lie that the Newtown, Connecticut mass killing of young elementary school children was a government-engineered hoax. We are beginning to learn the lesson of horrendous, harmful lies. Young is to pay nearly $1 billion to Sandy Hook Elementary school victim families. It’s not enough, in my opinion—does he even have it?—and it’s unlikely those families will get the cash anytime soon, given Jones’ ability to throw sand into the gears of the legal system, and his infinite capacity to lie and scheme to hold on to money, while getting eager marks to give him more.

Yet many people still listen to Alex Jones, and they believe whatever lies he spews. His Infowars website draws between 7-10 million visitors a month.

I won’t even get into conspiracies about COVID-19. I will say this. If COVID-19 began two miles outside Fort Detrick, the home of USAMRIID, which studies weaponized viruses, the media would not rest until it proved that our government was the source of the pandemic. Now apply that to China, which has successfully pulled off keeping the media, and the world’s health bodies like WHO, away from any conclusion that the coronavirus came from a lab in Wuhan though the lab in Wuhan is basically their version of USAMRIID. Draw your own conclusions about that, but the rest of the COVID conspiracies are as believable as chemtrails.

But elections are a different kind of lie.

In 2018, Democrat Stacey Abrams, who prior to running for governor of Georgia, held no position higher than minority leader in the Georgia House of Representatives, and had a net worth of somewhere in the vicinity of zero with around $50,000 in unpaid student loan debts, lost to then-Secretary of State Brian Kemp. She refused to formally concede, claiming that Kemp used his position to steal the election. Abrams now acknowledges “I’m not the governor” but still insists she won’t get a fair election, after the most scrutinized election in American history took place in Georgia in 2020.

At Monday’s gubernatorial debate with Gov. Kemp, Abrams would not directly answer if she would accept the results of this November’s election. Abrams took credit (some is deserved) for forcing “massive changes to the election laws” in Georgia. It’s true that the old election systems, which were 100% electronic, are gone, replaced with a hybrid electronic and paper-based system which allows hand counts. Those hand counts held up in 2020 when President Trump wanted to “find” the 12,000-odd votes he believed he had.

Abrams and Trump have this in common: their lawsuits alleging “rigged” elections were summarily thrown out of court by judges. Yet Abrams continues to spread the lie—without evidence—that Kemp “has assiduously denied access to the right to vote.” Millions of people believe this, if not that Kemp himself rigged an election or intends to, but the bigger lie that our election system is riggable at the state or national level.

Certainly, it’s possible to stuff ballots or fake counts in one precinct, and it does happen. But at the national level, the odds to predict that the specific precincts and districts necessary to sway an entire race, then to engineer those frauds to push the race one way or another, are vanishingly improbable, especially without being caught red-handed.

However, we have “2000 Mules” believers claiming that cell phone data proves there was a giant conspiracy to move thousands of ballots marked for Joe Biden, involving every possible player outside of extraterrestrial aliens, and it worked. They believe that Donald Trump won the 2020 election. And why not? For weeks after Trump won in 2016, even after Hillary Clinton conceded, Democrats refused to believe that Trump won without cheating, and refused to recognize him as a legitimate president.

Trump turned that on his head when he refused to concede, and took every grandstanding attempt to stop his own certification as the victor in 2016, magnified it exponentially, and put it into action. In 2016, Democrats begged for faithless electors and for governors and legislatures to overturn their results. Trump filed at least 60 lawsuits, and asked state attorneys general to join them (Texas did). At Trump’s certification in 2017, Democrats disrupted the procedure. Trump caused a riot. At Trump’s inauguration, paid activists burned limos and broke windows for the cameras. Trump ignored Biden’s inauguration, but kept control of the Republican Party.

Ignoring the magnitude and betrayal of the office and oath, what Trump’s side did in 2020 was simply a larger version of what Democrats pantomimed in 2016. Trump didn’t see the difference between the Democrats play-acting and his own dead-serious attempt at a coup. Millions of Trump supporters fail to see the distinction, even today.

Elections are not matters of personal opinion. Ballots are statements of fact, and counting them is akin to an engineering process. Failing to believe that elections results accurately represent the “will of the people” at least expressed through the ballot box is believing that the twin towers could not have collapsed because jet fuel doesn’t burn hot enough to melt steel.

It’s as damaging to the nation to believe that current day elections can be rigged at the state or national level, and be covered up in a massive conspiracy, as it is to believe that the government would engineer the killing of elementary school kids and cover it up. Or that the government is able to confiscate every gun from our country and end gun violence (such a thing is only possible if we gave in to tyranny and a police state). Or that there is no incompetence, cowardice, and ignorance at work in politics, policing, and the justice system.

Millions of people believe that small groups (“The Jews,” or Democrats, or Trumpists, or the Illuminati) are capable of giant conspiracies, that those groups are so powerful that they can pull off these conspiracies and cover them up, and that the “truth” lies in exposing those conspiracies. The actual truth is so obvious and banal, and flecked with human imperfection as to be unbelievable.

I once visited a very classified government site in Virginia. The kind of place when you walk in the room red lights flash and everyone covers their desks as you go through. The kind of place where they take everything from your person at the entrance, and hand you different color badges at each Marine-manned security door. I asked our host what could be so important that it requires such measures. He answered “if you knew, it would be so boring that you wouldn’t believe me if I told you.” He was right: actual intelligence data is nothing more than putting scant facts, frequently publicly available, together in a way that presents an analysis, a motive, or a prediction. The facts themselves, disconnected, sometimes mean nothing. In the context of where the facts are gathered and grouped, is where classified takes meaning.

There are fewer conspiracies than you think, and the bigger the conspiracy, the more complex the coverup, the bigger the chance that it will be exposed with real evidence, or that it’s not really a conspiracy in the first place. Especially if it contradicts physical facts, or the laws of physics. Now if everyone who exposes the conspiracy falls out of a window or disappears forever, that’s a different story. But that doesn’t happen in America, or at least not yet.

But Americans continue to believe the conspiracies, and revel in the lies. We have a lot to learn.