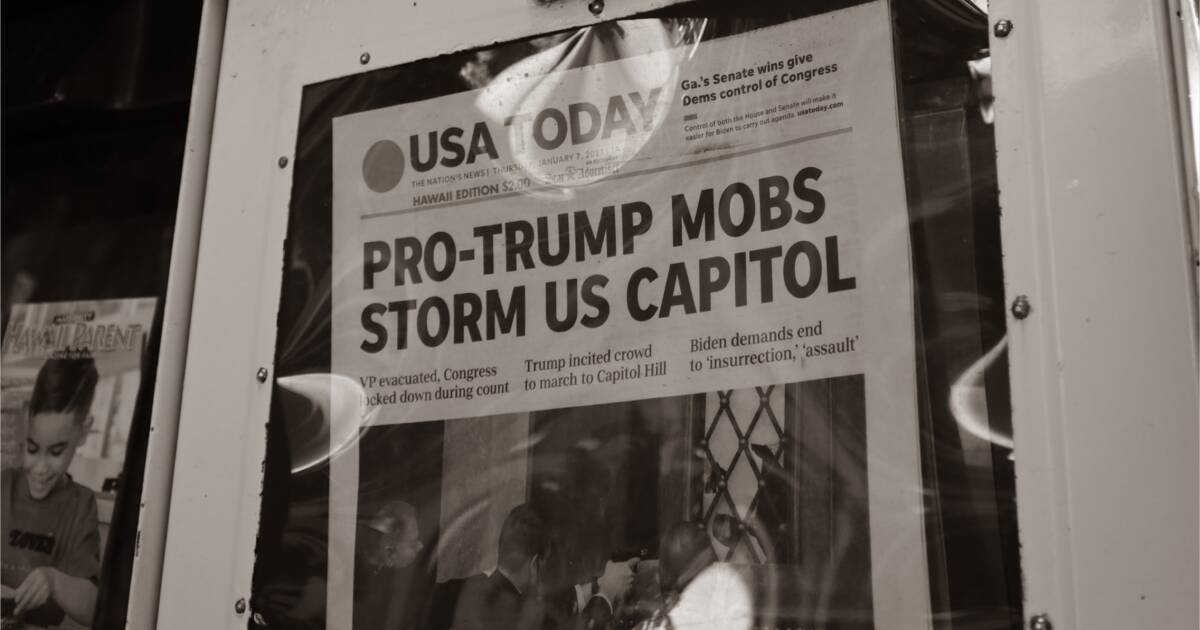 I struggled to put my thoughts and feelings together in dealing with January 6th, and specifically my two decisions regarding Donald Trump. In 2016, I did not vote for him but he became president; and in 2020 I did vote for him and he brought shame.

I felt derision in their use of “Trump supporters” in the headline, as if the term itself carried a shame with it, that those 74 million voters who cast ballots for Trump had to carry the weight of the crimes committed by a few thousand in Washington, D.C. Today will be wall-to-wall media coverage, with the focus on “division” and “peril.” President Biden is planning a speech highlighting those areas. High-minded words will be flung.

There is a very well planned playbook to retcon January 6th as the one defining event for all Trump supporters, meaning anyone who ever voted for him, ever. The media, and President Biden are going to paint Trump voters as traitors, fascists, insurgents, and dangerous fringe terrorists—or at least enablers of the same. Anyone who ever cast a ballot for Trump will be included in this category of shaming. There will be no-one spared, and the broadest brush will be used.

Any responsibility the media has in years before January 6th, 2021 will be airbrushed away out of existence, leaving only the insurrection, as if it birthed out of nothing but malevolence personified. They will engage in a giant “I told you so” finger-wag to anyone who expressed the least bit of positive opinion of the Trump administration or anything that happened between 2016 and 2021.

The truth is that the media bears a lot of responsibility, but they are retconning the story to blame voters who never set foot in Washington D.C., or even gave a dime to the “Stop the Steal” movement, never believing the tales of election rigging. But the media itself spewed lies for years. They latched on to the Russia story using a Clinton-funded fiction and made it their truth. They pushed conspiracy theories and “wall closing in” stories for four years. They highlighted profane leftist extremists and paid activists bemoaning Trump like he was a demon.

Anti-Trump media used former U.S. intelligence officials who lied to Americans while in office. They covered for the lies of huckster lawyers who grifted by being against Trump. They printed the most salacious and damaging leaks without bothering to even do the minimum fact-checking on sources. If the phone rang, and the message was something to make Trump look bad, the media printed it as truth every time.

In 2015 and early 2016, the media gave Trump billions in earned media exposure, to force out other candidates because Hilary Clinton believed Trump would be easier to beat than, say, Jeb Bush or Ted Cruz. They made Trump the centerpiece of their coverage until they realized that he wasn’t going to get stomped by Clinton. Even then, they maintained their own reality that Clinton was going to stomp Trump, and even on election night in 2016 they held on to the illusion until the very last flame of their dream was extinguished.

Now they want to shame everyone who elected Trump in 2016, and everyone who voted for him in 2020, and make their own contribution to the events leading up to January 6th go away.

But here’s something that set me free from the shame.

There is no shame in having voted for Trump or supported him in the past. Trump used all the same dirty tricks the media and Democrats had used for decades. Decades. And Trump did it back to them. They pretended they were angels. The gaslighting was strong.

Americans became sick of being preached to, gaslighted and treated like vote bots, dumb cattle, and useful vehicles for the ambitions of privileged elites. They latched on to Trump because he was a weapon; Trump was weaponized from the start. He was a giant middle finger to them all.

There is no shame in punching a bully in the mouth, and Trump was the fist for 70 million Americans. He swung and hit the media conglomerates and their political wives and husbands (literally, they intermarry) in the teeth. It felt good.

In 2015 and 2016, I saw Trump for all the things he is: crude, unrestrained, unethical, and pugilistic. I didn’t want such a weapon to be my representative or my party’s representative in the White House. I said so, quite forcefully. But the people, the voters, Republicans, wanted a fist. They wanted a middle finger. They wanted Trump and they elected him to be their avatar, their weapon, their VOICE.

I remember reading and hearing Trump’s nomination speech from the Republican National Convention in 2016, and realizing he was going to win, at that moment. The sentence where he said “I am your VOICE” was the key. Everyone knew exactly what Trump was and they wanted him as their voice, as their fist. They got him. He told the media to hit him with their best shot, and they did, with all the gusto they possessed.

But that’s not the end. There is more. Trump the fist and middle finger didn’t want to be “president.” He wanted to be king, or emperor. Never questioned. Never humble. Never wrong. He couldn’t put the fist down even when it mattered. Many Republicans believed that this would be a problem for a Trump presidency, and for years, his closest cabinet acted to contain the problem, but in the end, they could not.

There are a lot of Trump supporters on social media who think Jan 6 was a good thing. It was a very bad thing. It was the fist used against not the left’s bully but against the authority of the republic itself. No amount of explaining or retconning will change what happened. The people who elected Trump wanted a fist, and those who saw the fist used against lawful authority and institutions and still cheered are worthy of shame.

Those who think Trump will or should rise again and won’t put the first away because it felt good punching the bully have become bullies. Many of them were already petty bullies who used Trump’s allure to enhance their own self-image. Some are worse: they have become cultists. There is shame in being a bully or a cultist. January 6 was the fist out of control, and those who supported it were themselves out of control.

We must never in America tolerate an out of control violent mob. Trump not only tolerated them (so did Obama and Democrats, a different mob) but pointed them at the weakest link in our peaceful transfer of power. The interruption of our 230 year unbroken legal ability to change leaders was planned and attempted from the West Wing and we learn that the mob may have been Trump’s insurance policy if Pence didn’t “play ball” (he didn’t). The plans were done on government time, using government computers, Powerpoint slides, and using the power and authority of the executive office of the President. That’s worthy of shame.

Those who supported Trump at one time but are now not disgusted by the events and plans of January 6, 2021, are allowing themselves to be deceived and used by those who treat them like dumb cattle and vehicles for their own ambitions. Only they don’t see the delusion. The people using them are not the elite media and Democratic activists, but elites at Fox News, MyPillow and others who take advantage of their voice, money, and social media presence. The very thing they used Trump to fight against, they are now willingly enslaved to.

There is shame in Republicans who continue to spew conspiracies and lies that damage voters’ faith in elections. (The U.S. has the most trustworthy and difficult to rig election system in the world, mostly because it’s a web of thousands of elections, mostly run competently and by honest people.)

There is no shame in having voted for Trump. Don’t let the plans and words of Democrats and the left wing media put shame on that. They need to be ashamed of their own actions, lies and conspiracies. But make no mistake, Trump brought shame upon the nation. Those who invaded the Capitol are criminals, and brought shame upon themselves. Those who think Trump is still the answer—the fist and the giant middle finger—need to feel some shame.

I say shame on them all.