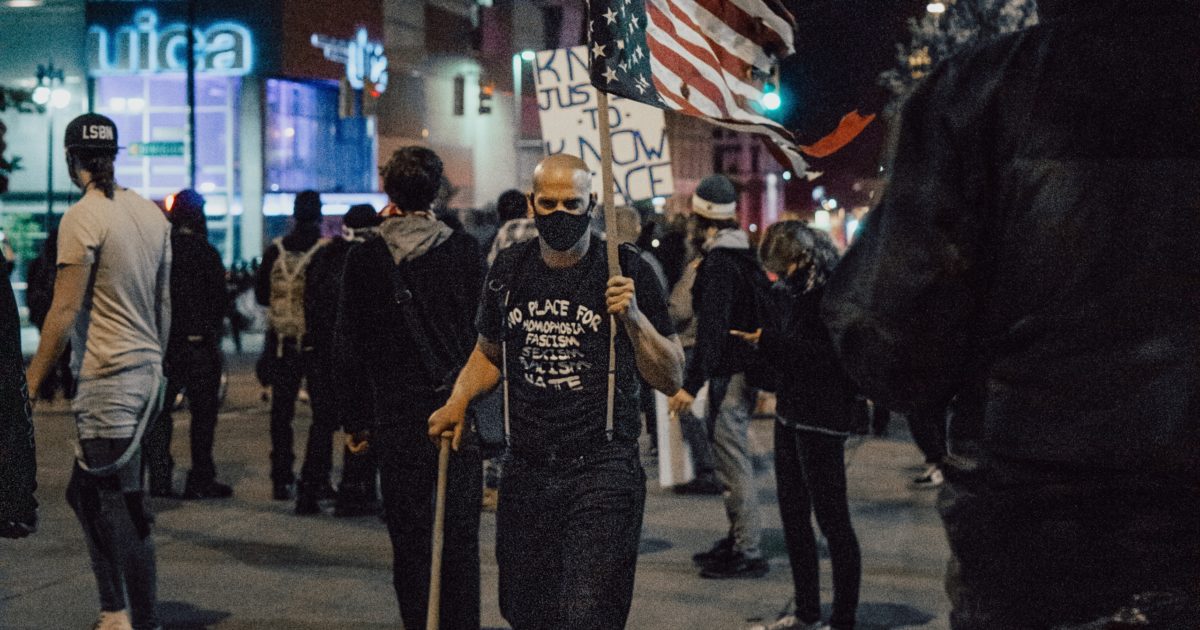 The FBI last week foiled a violent plot by 13 men, the details of which included a plan to kidnap Michigan Gov. Gretchen Whitmer. In Wisconsin, BLM protesters continue to push into residential areas, breaking windows and damaging property. Reporters are being chased by crowds, and violently detained by police.

And I got a political mailer blaring “Riots. Looting. Anarchy” claiming “Jon Ossoff’s radical agenda is dangerous.” The violence is being used by both sides of the political divide. While bicoastal elite media sees armed “cosplayrtiots” brandishing long guns as the main threat, heartland America sees BLM and Antifa rioters as a looming cloud over their livelihoods.

Benjamin Ginsberg is a jovial man in his 70s who has seen a lot of politics in his study of American government and history. He is a noted author, a professor of political science, and chair of the Center for Advanced Government Studies at Johns Hopkins University who specializes in the study of violence. In 2013, Ginsberg published a book titled “The Value of Violence.” We spoke recently, and Ginsberg summed up the motivations of Democrats and Republicans to weaponize political violence for me.

After a very interesting and pleasant talk, I must agree that I am not nearly cynical enough.

Let’s look at some real threats. The New York Times reported Friday on the 13 men charged with various crimes linked to their kidnap plot:

They indicated that they wanted to take Ms. Whitmer hostage before the election in November, and one man said they should take her to a “secure location” in Wisconsin for a “trial,” Richard J. Trask II, an F.B.I. special agent, said in the criminal complaint.

Gov. Whitmer has been a convenient target for those bent on displays of firearms and talk of insurrection. Her extreme overreach on emergency orders stemming from the coronavirus pandemic have drawn a rebuke from her own state’s supreme court. Some of her worst offenses have included capricious closings of businesses that sell paint. The court wrote that Whitmer assumed powers in breadth, scope, and length to “reorder social life and to limit, if not altogether displace, the livelihoods of residents across the state and throughout wide-ranging industries.”

So, yes, Whitmer is a tyrant. Tyrants breed violent responses.

Democrat mayors like Ted Wheeler and Jenny Durkin are pandering to their ultra-liberal base by keeping the violence going. Ginsberg minced no words: “They are stupid. They can’t think it through.”

“They’ll need the police later, after the election,” he added.

Antifa isn’t really an organization, but neither is BLM, despite having an actual organization behind it, according to Ginsburg. It’s really a whole host of groups. Democrat politicians are “encouraging unrest in order to ensure black voters are mobilized for the election.”

“One of the reasons they lost in 2016 is depressed African-American voter participation.”

He’s right. According to Pew Research, black voter turnout “declined sharply” in 2016. This could be one of the primary reasons the Democrats panicked when Bernie Sanders began to emerge, and they coalesced around the more Black-friendly Joe Biden. It also fits the explanation that Kamala Harris was chosen for her race.

So is all this violence just a turnout operation? That’s pretty cynical.

“Nobody is cynical enough,” Ginsberg said. “The reality of politics is generally worse than we think.”

It’s all about popular mobilization. Groups like Antifa use violence as a recruiting poster (like ISIS does with beheadings, Ginsberg observed). Violence is a tool to underscore the demands of those using it: efforts to “convince suburban voters that force is not the answer.”

Yet, conservatives “control the police forces; they don’t need to mobilize violence.” That’s largely true. Michael McHale, president of the National Assn. of Police Organizations, said to the Republican National Convention that the true root of violence is elected officials “refusing to allow law enforcement to protect our communities.”

“The violence and bloodshed we are seeing in these and other cities isn’t happening by chance,” said McHale, a veteran police officer from Sarasota, Fla. “It’s the direct result of refusing to allow law enforcement to protect our communities.”

“The differences between Trump/Pence and Biden/Harris are crystal clear,” McHale said. “Your choices are the most pro-law-enforcement president we have ever had or the most radical anti-police ticket in our history.”

Meanwhile, Democrats focus on abuses by the police like the Breonna Taylor case. Taylor was killed in a hail of bullets by plain-clothes officers forcing their way into her apartment in a late-night raid, where the facts of the officers announcing themselves as police is one of the central and disputed questions.

The police can, and do, initiate violence, but normally in the course of discharging their official duties. Sometimes this is done with malice, but most of the time–the great majority of the time–it’s a matter of judgment. Groups like the one charged with the plot to kidnap Gov. Whitmer are lumped in with corrupt or violent police as “the right’s problem,” but there’s a major difference between law and order, and fringe far-right violent criminals.

There’s a difference between the KKK, the Proud Boys, and neo-Nazis too. The KKK has a history of violence. Nazis are unacceptable in any political frame, but the Proud Boys are neither of those. But Democrats and the mainstream media lump them together (as do Joe Biden and Kamala Harris).

There’s a difference between genuine Black Lives Matter protestors, who march peacefully for and end to inconsistencies in how Black citizens are treated at the hands of law enforcement and the courts in the criminal justice system, and violent Antifa agitators who break windows and burn Black-owned businesses to the ground. But Republican political advertisements lump them together as threats.

Democrats want to motivate suburban and Black voters. Republicans have a simple message: “this is what it looks like with Democrats in charge,” said Ginsberg.

Both parties are cynically using political violence as a turnout operation to win this election. They are playing to our basest motivations. “Fear and greed,” Ginsberg offered.

It’s all about power. Quoting Mao, Ginsberg noted that “political power comes from the barrel of a gun. Peaceful means comes later.”

Political violence is here, and it’s going to be difficult for either party to put it away. After the election, “Democrat mayors will want to reassert their authority.” But if they’ve completely gutted their own police, they will have a hard time doing that. Groups like Antifa and BLM don’t want to just go away. It takes a while to move them off the stage.

Just like Trump likes to wink and nod at certain groups he can use, Kamala Harris and Joe Biden wink and nod at police. If they win, we will find that their history of being law-and-order politicians might come in handy, to the chagrin of liberals who voted for them thinking there would be real change.

It’s all a game of politics, but one where people die and businesses are burned, and the hatred of all is inflamed. That’s what 2020 political violence looks like. We’re just not cynical enough to see it.

If that’s not cynical enough, I don’t know what is. And a lot more seems to be coming.