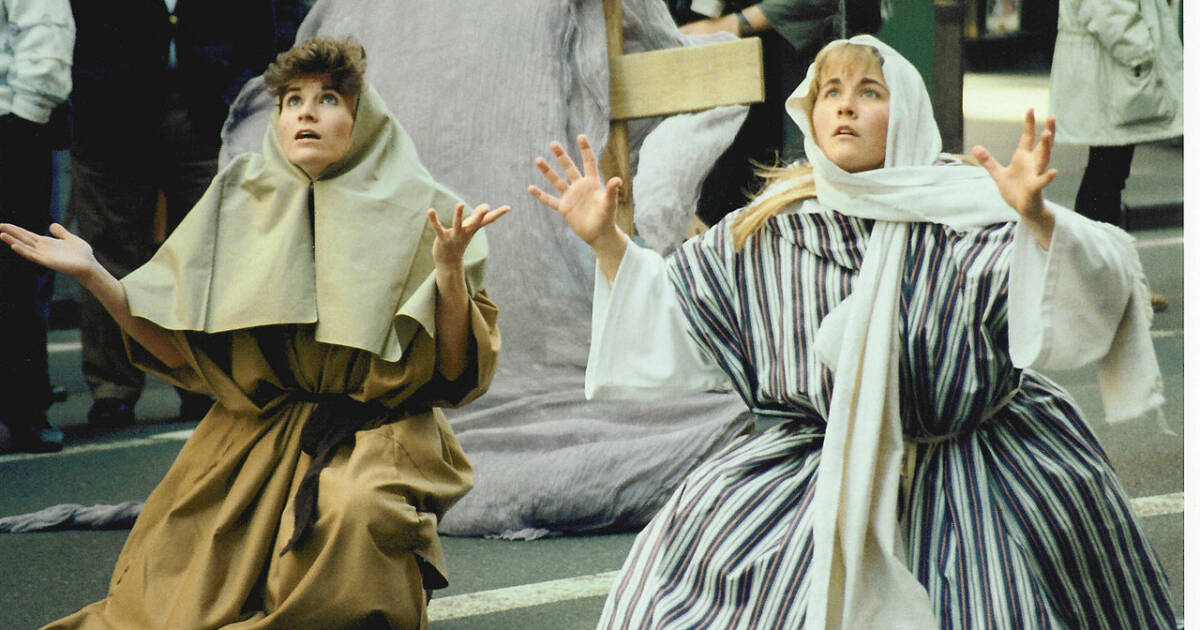 Everyone knows someone who is genuinely weird. I remember growing up, there was a particular acquaintance who would sometimes play cards with my group of friends. Let’s call him Nick (I was going to call him “Al” but then, “weird Al,” alas is taken). Nick had a tendency to renege playing games like Hearts or Spades. Even when we’d warn him—we’d play a whole hand and on the last card, he’d play a spade, or a heart, and spoil it. Frustrating beyond words.

A girl once told me I was weird in seventh or eighth grade; she said I was “good weird” not “weird weird” so it was okay. I think she was referring to me as one of the kids who played D&D, and discussed intimate details of The Silmarillion for hours at a time. And Nick was not a bad kid, he was just weird—too weird to play cards with.

In Europe, it’s now weird to be Christian. Even though most Western European nations have state religions, actually being a Christian is considered weird. An Easter parade, carrying a cross through the street, to most Europeans, is like seeing people dressed as aliens in public. In San Francisco, it’s less weird to see burly men wearing nothing but leather thongs marching in the street, some on leashes, than a Passion Play.

It’s increasingly weird to not pick a political side, proclaiming everlasting fealty to its precepts and leaders, who can do no wrong, and opposing with fiery hatred the “other” side or anyone not sufficiently loyal in the most detailed rites and ceremonies of the chosen side. It’s increasingly weird not to align with extremists.

Christianity is extreme, and at its core, weird. It cuts against every human proclivity, and proclaims the things we consider “good” about ourselves to be no better than the most evil people in the world. Luke 6 cuts us down to size.

The most loving parents get no credit for their love. BFF is just another buddy movie. Soldiers who fight together and develop lifelong bonds are no better than the Cosa Nostra. As Bono sang, “The city’s a flood, And our love turns to rust.” Christianity demands that we love our enemies, that we do good to them, and lend without expecting to be paid back. That’s weird.

Every political faction has its own piety, rights and acts of devotion, and none of them are Christian. Many rely on idols and cults of personality. Many call themselves Christian but are not. The mark of a Christian is not who loves them, but who hates and curses them as evil (Luke 6:22). But if you’re watching (and Christians, being weird, are always being watched), Christians are known by their love and unity in the faith. In the face of hate, rage, and mocking, Christians are expected to leap for joy and sing.

If you’ve been paying attention to this nation’s discourse, it’s not weird to hate, attack, and assume bad faith and evil motives to anyone and everyone who doesn’t agree with the chosen side. It is weird when someone discerns the motives behind others’ actions, calls them out, and despite getting mounds of hate from people they’ve broken bread and sung praises with for decades, continues in love. One good example of this is Russell Moore, the newly-named editor-in-chief of Christianity Today.

Moore has consistently called out unchurched Christians who have hitched their faith to Donald Trump. In the process, he’s smoked out giant conspiracies and sin in the Southern Baptist Convention. Thousands of good, Christian pastors have been swept up in the actions of relatively few, who encouraged cover-ups and band-aids over sexual predators, and also did little to rein in the cult of Trump within the pews.

His latest “When the South Loosens its Bible Belt” describes what isn’t weird anymore: to be a non-churched person saying they are Christian. “Recent studies,” he wrote, “show that, increasingly, white Southern evangelicals are deciding that when it comes to the church, if not to heaven, they’d just as soon stay home.”

Unchurched evangelicals in the South not only keep their politics but also ratchet up to more extreme levels. They maintain the same moral opinions—except on matters that directly affect them (like having premarital sex, smoking marijuana, and getting drunk).

And this isn’t a small group. Data gathered by Daniel K. Williams indicates that the unchurched are the largest group of Evangelicals in the South. A couple of points:

First, they’re numerous: According to the GSS survey, 45 percent of white Southerners self-reported attending church no more than once a year. If “lapsed evangelical Protestant” were a denomination, it would be by far the largest religious body in the South.

I’ve been listening to the audio book version of “Jesus and John Wayne: How White Evangelicals Corrupted a Faith and Fractured a Nation” by Kristin Kobes du Mez. She spends a great deal of time linking “consumer culture” and Evangelicals over a century of history. As for the results themselves and the overall trends she follows, I can’t say (so far) that she’s wrong.

I do, however, have a lot of problems with du Mez’s analysis. She smuggles motives into the histories of Christian and secular figures like Billy Graham, Phyllis Schlafly, James Dobson, and of course John Wayne, that may or may not have been present or even a factor in their life decisions.

People have different motives, and it’s easy to start “here,” where a cadre of white, self-identified Evangelicals without a church home to speak of, politically opinionated men relentlessly follow Donald Trump because he is preternaturally gifted at exposing the hypocrisy of the unchurched political left (of which, he’s more likely aligned in moral and political issues), and invent a trail of breadcrumbs going back to Billy Sunday. It’s not so clear that those breadcrumbs were laid with the purpose du Mez argues (white patriarchy and subjugation of women and minorities).

Trump’s popularity is based on fear and loathing. It’s not weird to be a Republican, Evangelical voter who loves Trump. It is weird to be a Christian who calls out those who aren’t weird. Moore soberly laments the shift that saw atheists with political aspirations searching for a congregation to appear “normal” to what we have now.

Cultural Christianity, as we once knew it, is largely being replaced by a kind of blood-and-soil Christianity. The “Christianity” in such settings is the sense of belonging and obligation not to a church but to a particular brand of white political and cultural identity.

This is a remarkably similar conclusion to the one du Mez starts with, though I suspect Moore might have similar criticisms and misgivings about her book as I have.

The key to weird Christianity is maturity and discernment. Without those, all we have is a faction-based religion where what the crowd does is the right thing, and everyone else is a heretic. This is no better than the sinners and their political factions. In fact, Christianity bereft of study, maturity and discernment is like a rudderless ship, and therefore will end up following the tide of political fortune. If it’s not weird to be a Christian, then maybe it’s not being done right.