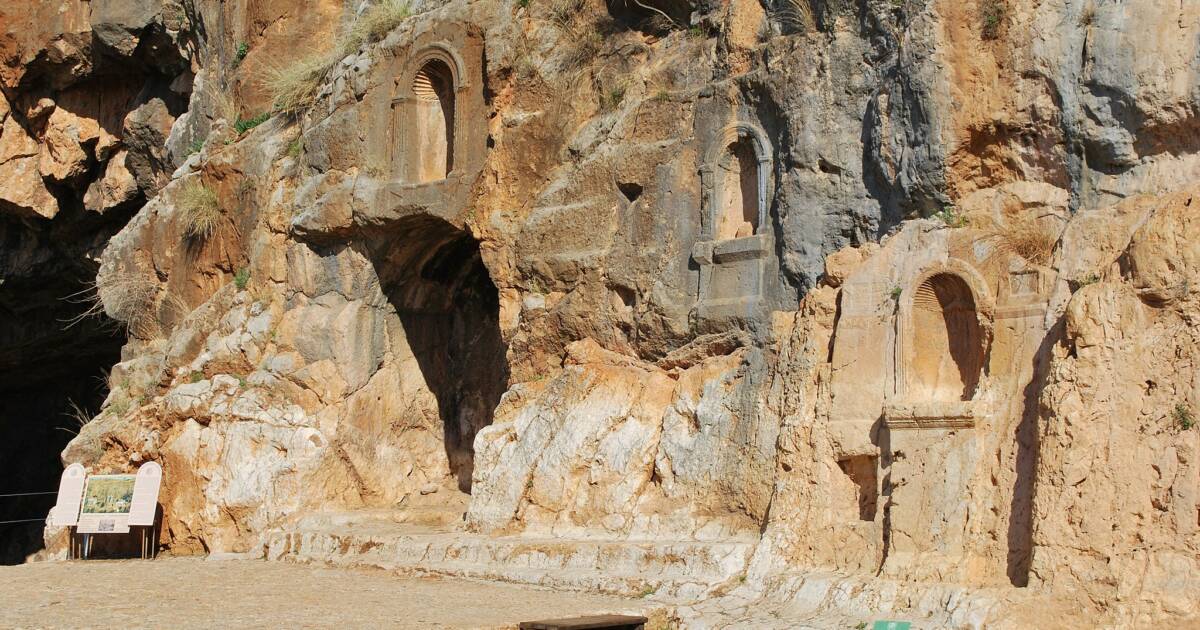 In northern Israel in the foothills of Mount Hermon, just a few kilometers outside the modern city of Dan, and 182 km (113 miles) from Damascus, there’s a place called Caesaria Philippi. It’s currently the remains of an old Roman city that Herod Philip named after himself. It has since Old Testament times been a pagan center of worship. Originally named Banias or Panias, after the Greek god Pan, it also served as a place to worship Baal and other gods.

It is in this place that Jesus took His disciples and while walking, asked them “who do people say the Son of Man is?” (Matthew 16:13). After the others replied with what the public was saying, “Some say John the Baptist; others say Elijah; and still others, Jeremiah or one of the prophets” (verse 14). Then Jesus asked directly, “Who do you say I am?” Peter answered “You are the Messiah (the Christ), the Son of the living God” (verses 15 and 16).

It is widely believed that Jesus and the disciples were standing at the place pictured above when Jesus said “Blessed are you, Simon son of Jonah, for this was not revealed to you by flesh and blood, but by my Father in heaven. And I tell you that you are Peter, and on this rock I will build my church, and the gates of Hades will not overcome it.” You can stand there today and see the Gates of Hell.

There are places in the world that serve as portals to the demonic. These are not in the fictional sense dimensional gates with fire and horned creatures emerging from them, like the movies (“Poltergeist” comes to mind) portray. They are not places built on some holy ground filled with the bones of restless spirits. Instead, they are active places where people commit themselves fully against the God of the universe.

One time on a family cruise, we went to Paradise Island in the Bahamas and got a tour of the Atlantis resort. We walked through the smoke-filled casino with our kids, and I noted the plush, patterned carpet designed to keep you in the room, and the lack of clocks or outside references to keep patrons from knowing what time it is, the better to gamble 24/7. At the other end of the casino was a deep section leading up to the aquarium, and a couple of the rooms had a diving bell theme. We all felt this chill, like were were literally standing in a portal to Hell. It was very disconcerting, and I’m not one of those people always looking for the paranormal or super-spiritual nature of things. We left quickly.

At Caesarea Philippi, at the foot of the mountain called Baal Hermon, there is a grotto that used to have a stream flowing from it. The stream was blocked up by an earthquake, possibly the one in the year 33, identified as the one that happened during Jesus’ crucifixion, or the large earthquake in 306, or the Galilee earthquake in 363 that prevented the rebuilding of the Temple. In any case, in the days of Roman occupation, the Temple of Pan stood at the grotto, and worshipers would bring an infant as a sacrifice.

Jesus brought his disciples to a place that was avoided by any religious Jews. It was a nasty, pagan place, that even its own partakers believed was a portal to the underworld. Remember, many Romans and Greek pagans celebrated the underworld. It was not a place to be feared, as the Christian hell, but in many ways more like a permanent wild party attended by the dead and the gods who had their own agendas.

The ancients practiced abortion, but it was far from “safe, legal and rare.” As a medical procedure, it was as unsafe as any other ancient medicine, which is to say barbaric. As for legality, the Romans considered unwanted infants to be refuse. What we consider to be brutal was simply life for them.

As shocking as it is to us today, infanticide was an open and systematic method of maintaining the population and contributing to the greater good of the typical Roman family. According to Roman law, parents deserted newborns who were sick or had a visible congenital disability. Babies born to families who couldn’t care for them were also abandoned to the elements.

Christians collected the abandoned babies and raised them. This practice continued for centuries and the “foundling wheel”—a Christian invention for anonymously and safely placing unwanted children with caring families—still exists today.

The thread that runs common through all forms of infanticide is an abiding absence of faith in the Hebrew God, and therefore also the Christian God. Babies are not treated as people in this worldview, but as either resources to be sacrificed to other gods, or treated as cogs in society’s wheels, to be used or crushed depending on the needs of the day. What is shocking and disturbing to us today was simply life in former days.

Today proponents of abortion use euphemisms like “women’s health” and “clump of cells” and “fetus” (which simply means unborn child) or “products of conception” to describe the brutal reality of abortion. Medically, abortion can be (generally) safe, when done properly. But even efforts by governments to regulate who can perform the procedure are cast as limiting access to “women’s health.” In California, a terrible law was passed, AB775, that required pregnancy care centers to display prominent signs noting they do not provide abortions and listing places patients can go to get one.

The fact is, no healthy pregnant woman, no matter how she became pregnant, needs an abortion. The decision to obtain one is a mental health, spiritual counseling, and economic assistance issue. It is not a medical issue. Those who want to tilt the decision as one of medical necessity are just lying, or in the case of Planned Parenthood, lying for monetary gain. Counseling centers, which are mostly staffed by Christians, and mostly offered at no cost, seek to give sound mental health, spiritual counseling, and economic assistance to pregnant women who are scared of having a baby because of life circumstances. If the woman decides to obtain an abortion, it’s between her and God.

If you’re a Christian and opposed to abortion (which you should be as a spiritual practice), but you condemn the scared teenager who gets one, or shames the pregnant girl at a high school, or looks down at the promiscuous teen who fails to practice abstention or use contraception, you’re a Pharisee. You’re the one who wouldn’t accompany Jesus to the Gates of Hell because the place is associated with pagan goat sex and child sacrifice.

Jesus said the Gates of Hell—meaning the very place they were standing—would not prevail against His Church. Not because of our political action, or the overturning of Roe v. Wade, but because of His righteousness. The whole world can be steeped in sin, infanticide, and devotion to sexual pleasure, and the Gates of Hell still will not prevail. In Roman times, those practices were common, and even within the church they occurred.

Paul condemned the Corinthian church, writing in 1 Corinthians 5: “I can hardly believe the report about the sexual immorality going on among you—something that even pagans don’t do. I am told that a man in your church is living in sin with his stepmother. You are so proud of yourselves, but you should be mourning in sorrow and shame. And you should remove this man from your fellowship.” It’s proper to remove sexually immoral people from the church. But the world is not the church.

Abortion is a portal to hell in the sense that it’s rooted in pagan worship and practice. It is descended from the brutal Roman treatment of infants as burdens to be disposed of. The children killed by abortion are with Jesus waiting for His return; they are not in Hell. The mothers who participate in this practice are souls loved by Jesus, and we must love them. We have no other weapons in the Christian faith than love, no greater weapon, and no unfailing weapon than unconditional love. Love for the child, love for the mother, love for the sinner and those who live sinfully by choice.

Christian, take heart. The Gates of Hell will not prevail against the Church, because Jesus is the Christ, the Messiah, the Son of the Living God, who took away the sin of the world. If He isn’t let Christianity die, along with the rest of the world. As Paul wrote in 1 Corinthians 15:18-20:

In that case, all who have died believing in Christ are lost! And if our hope in Christ is only for this life, we are more to be pitied than anyone in the world.

But in fact, Christ has been raised from the dead. He is the first of a great harvest of all who have died.

Worldly person, take heart. Christ has been raised from the dead, and He is here for you also. You are part of the great harvest, and you do not have to live with the brutality of this world. The Gates of Hell cannot have you when you decide to stand with Christ.