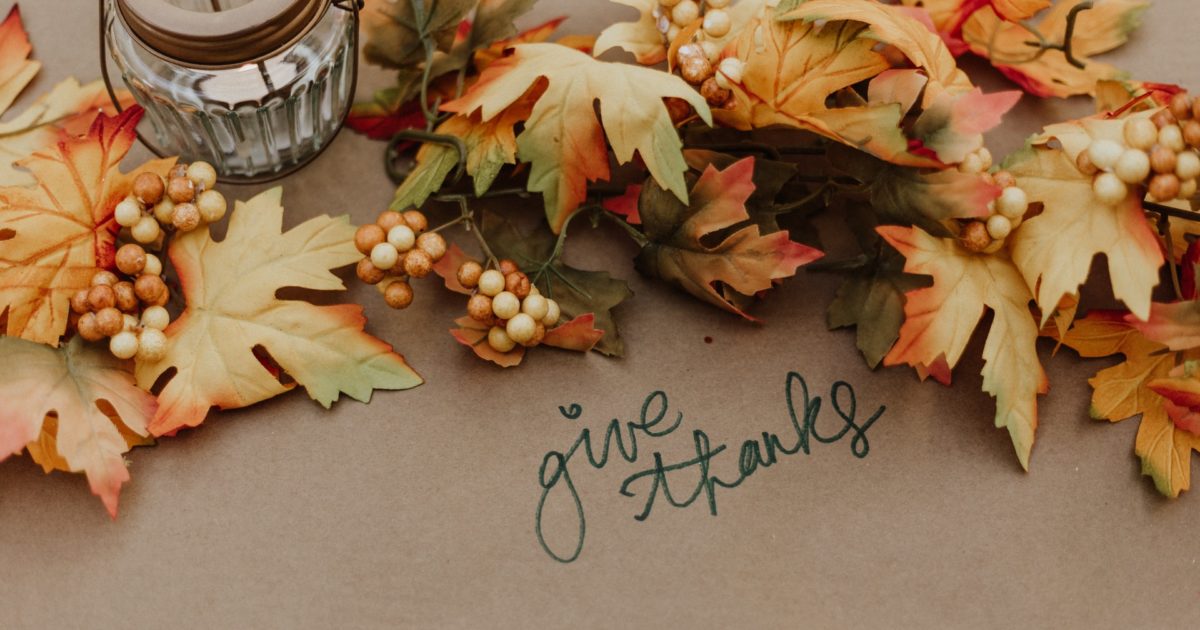 This holiday season is going to be unlike most of us have ever experienced. No matter what your opinion on politics and the virus, the fact remains that America is undergoing more adversity this year than at any other time in many of our lives. Even 2001 after the terrorist attacks and 2008 amid the financial crisis pale in comparison to what we’ve experienced this year. For many of us, it is hard to be thankful in the midst of such strife, but, for those of us who are Christian, that is exactly what we are commanded to do. Despite all the bad news, when I look around me I can see a lot of things to be thankful for.

In every thing give thanks: for this is the will of God in Christ Jesus concerning you.

The most obvious is that, if you are alive and able to read this, you should be thankful. As the old saying goes, any day above the ground is a good one. Whether you haven’t contracted COVID or you’ve survived it, you have a great reason to be thankful.

We should also be thankful for the health of our friends and families. The Coronavirus has not touched my immediate family. I’ve had numerous friends and more distant family members contract the disease but most have recovered.

For those who haven’t recovered, I am thankful that we have a forgiving God. I am hopeful that they are removed from their pain and suffering and that we will be reunited in a better place someday.

My mom told me this week that their pastor, the man who performed my wedding, and his wife both have Coronavirus. Their church closed for two weeks in an attempt to limit the outbreak. My dad has respiratory issues and my mom is a cancer and chemotherapy survivor so I’m very thankful that they elected to continue attending church virtually rather than going to in-person services where they could have been exposed.

I’m thankful for the technology that makes social-distancing bearable. We can order groceries, meals, and toilet paper online and have them delivered or ready for pickup without putting our health at risk. I’m very thankful that toilet paper exists in general.

I’m thankful for the time with my family that the pandemic has given me. We have seen much more of each other this year than we would have if we were going our separate ways to work and school. With my kids getting older, that extra time has been a precious gift.

I’m also thankful for the frontline medical workers and researchers who have spent the past several months fighting the virus. These people have risked their own health and lives for their neighbors. Many have died or lost their own health as a result.

Greater love hath no man than this, that a man lay down his life for his friends.

We should also be thankful for medical knowledge. Hundreds of years of accumulated expertise as well as more recent research have shown us that protecting ourselves and our families is as simple as:

I’m thankful for people around the country who will practice self-sacrifice on Thanksgiving and throughout the holiday season to protect the lives of their loved ones. Sometimes love is better expressed by staying away than by holding someone close.

The simplicity of protecting ourselves reminds me of the story of Naaman in the Bible, who was instructed by Elisha to wash in the Jordan River seven times to cure his leprosy. Naaman became angry at the simple and seemingly senseless command. Naaman almost didn’t do as he was told, but in the end, his servants convinced him to follow Elisha’s simple advice and he was healed. Sometimes following simple instructions leads to great rewards.

I’m thankful for our advanced medical research. It hit me last night that we had never heard of COVID-19 at this time last year. The virus has been a factor in our lives for less than a year, but we have already been able to create at least three very effective vaccines that are almost ready for mass distribution. That is an unprecedented accomplishment. I’m extremely thankful for the brilliant minds that chose to spend their lives researching and curing diseases.

Previous pandemics often lasted three years or longer. As bad as Coronavirus has been, the introduction of vaccines will cut this pandemic short, saving hundreds of thousands of lives and billions of dollars. That is truly something to be thankful for.

Those of us who still have jobs should be thankful for the steady paychecks that are still coming, even if they might be at a reduced level. We should be thankful that the CARES Act reduced the number of layoffs in the first months of the pandemic recession.

It can be difficult to thankful in the midst of unemployment and pay cuts. I know because I’ve been there. But those people can be thankful for safety net programs, for charities, and for other people who lend a hand in their moment of need.

I get by with a little help from my friends.

I’m thankful that, despite the angst about public health restrictions, Americans really don’t know what tyranny is. Some jurisdictions have gone too far in anti-virus regulation. Others haven’t gone far enough. None reach the level of tyranny, however. It isn’t tyranny to say “no shirt, no shoes, no service” and it isn’t tyranny to ask folks to wear a mask and social distance in the midst of a pandemic caused by a dangerous virus that is spread through the air by close contact.

Tyranny is the killing and imprisonment of dissidents and journalists in Russia, North Korea, Iran, and Saudi Arabia. Tyranny is the confiscation of private land in Zimbabwe and Venezuela. Tyranny is the Chinese government imprisoning pro-democracy demonstrators in Hong Kong.

America has problems but we don’t have tyranny. I’ll get pushback for saying that, but we should really be thankful that our freedom has survived 200 years of encroaching government rather than making our problems seem worse than they are. We can also be thankful that the restrictions made necessary by the pandemic will be going away in a few months as vaccines are distributed.

Finally, and this will also be controversial, I’m thankful that a peaceful transfer of power looks more and more likely. If Joe Biden had lost, I am sure that there would have been violence. I’m thankful that did not happen.

However, as I wrote before the election, I’ve long been concerned that President Trump’s allegations of election fraud could lead to violence from the right. I’m thankful that has not happened and hopeful that it won’t.

Most of all, I’m thankful that this too shall pass. Our adversity is temporary. We can look forward to a return to normalcy next year as vaccines end the pandemic and the economy surges back. Next year at Thanksgiving, masks and social distancing will be a distant memory. We just have to stay healthy until then.

Have a safe and happy Thanksgiving.