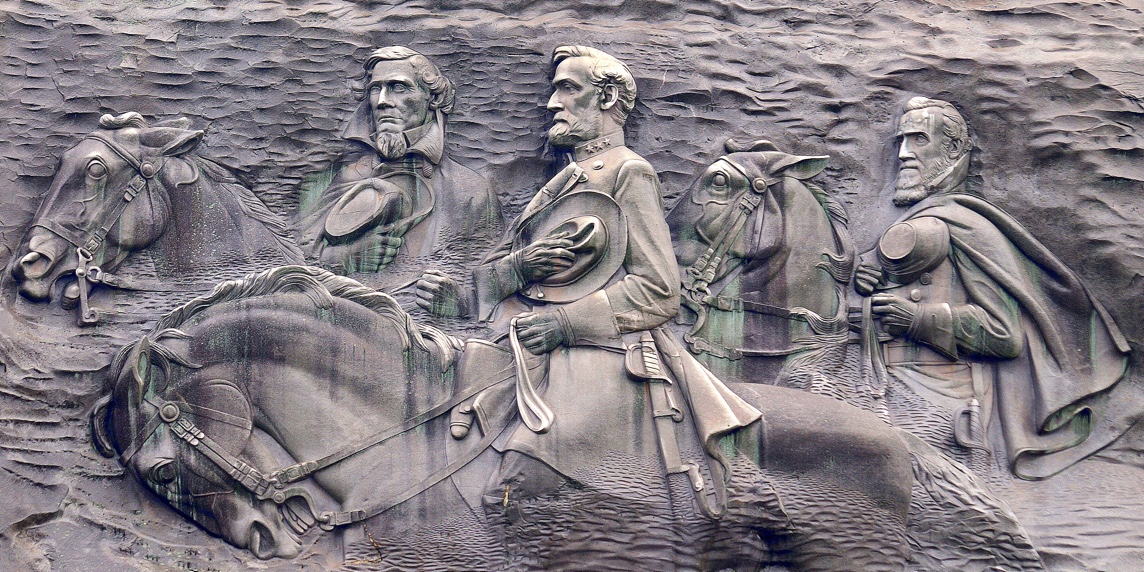 The Civil War still rages on the face of a giant pluton fifteen miles east of Atlanta. Every few years, the issue of the world’s largest bas-relief carving, depicting Confederate leaders CSA President Jefferson Davis alongside Generals Stonewall Jackson and Robert E. Lee, hats in hand, on horseback, forces its way back to the surface like a volcano spewing chunks of lava.

Monday, the Stone Mountain Memorial Association board approved some small changes to somehow contextualize a very sore issue for many Georgians, and southerners in general. The changes include:

These are not big changes, but the board members are constrained by Georgia state law, which requires the park to operate “as a Confederate memorial and public recreational area” (O.C.G.A. § 12-3-191). I’ve written before on this topic; it’s way past time for the Georgia legislature to modify the law.

Legally, this chunk of rock, that has supplied granite for the steps of the U.S. Capitol and the U.S. Treasury building, is set aside as a memorial to those who fought for slavery, after it was bought by a racist whose wish was to honor Confederate leaders in a manner consistent with U.S. presidents. That’s the history Georgia lawmakers are protecting, and that’s the sad “tell the truth” story that will be featured in the new museum.

The NAACP has consistently called for the carving to be blasted off the face of the rock. I’m not advocating that, but it’s very possible that history will alter the meaning of the artwork from something of honor to a reminder of shame, and a warning for future generations. What’s there is there, and it can be used for education and remembrance of what’s right and what’s wrong.

Georgia state law protecting Stone Mountain as a Confederate memorial does no favors to history or to the future of race relations. Stone Mountain has a terrible history as one of the birthplaces of the revived Ku Klux Klan. Certainly, Robert E. Lee, a humble man, would not have approved of its use.

Lee was not an evil man. But no matter how honorable, or Christlike, or brilliant General Robert E. Lee or Thomas J. “Stonewall” Jackson might have been in their lives, they fought for the wrong side. They fought to preserve an evil practice and a failed cause.

The Venable family, who owned a large granite contracting operation, bought the mountain property in the late 19th century. The mountain was leased to the state by the Venables, and finally sold to the state of Georgia in 1958. Sam Venable was a well known leader in the Ku Klux Klan, and it was his idea to have Gutzon Borgium—who famously sculpted the presidential faces on Mount Rushmore—carve the mountain to honor the Confederate leaders.

On November 25, 1915, Venable was one of 40 men who participated in the “formal induction ceremony” of the revived Knights of the Ku Klux Klan, along with the speaker of the Georgia House, led by “Colonel” William J. Simmons.

The purpose of Stone Mountain was to honor slavery and the fight for it.

Sure, we could blast the image from the mountain, but that wouldn’t do much except satisfy the wokes who do things like remove images of George Washington and rename schools in his namesake. The legislature needn’t scour the image, but they should change the purpose of the park to not honor the men (if some southerners want to honor them, that’s their business), but to educate future generations.

At the risk of violating Godwin’s Law, let’s use Nazi death camps as an example.  Auschwitz is maintained as a memorial to the Jews and others incinerated in its ovens, but nobody has gone in and eradicated the symbols of the Nazi regime, like the famous gate over its entrance.

On the other hand, let’s say the government of Poland passed a law providing for Auschwitz as a memorial to Hitler, Himmler and Rommel, dressed in full military uniform, the world would react in horror. If that terrible monument also included Claus Schenk Graf von Stauffenberg, who led the plot to assassinate Hitler, it wouldn’t matter. Regardless of von Stauffenberg’s honorable intentions, he fought for the side that murdered six million Jews. It would just be inappropriate.

In the next legislative session, O.C.G.A. § 12-3-191 should be repealed and replaced with a rededication of Stone Mountain Park as an educational and cultural memorial, honoring the Civil War dead on both sides, along with the fight for racial equality. It should serve as a stark reminder of what the men on the giant pluton fought for. It should not honor those men, but it should encourage generations who came after, and the racial progress we’ve made since the Georgia House speaker burned a cross on the summit of Stone Mountain.

We have a lot more work to do in this regard. The changes at Stone Mountain are good, but not enough. The legislature must now act.