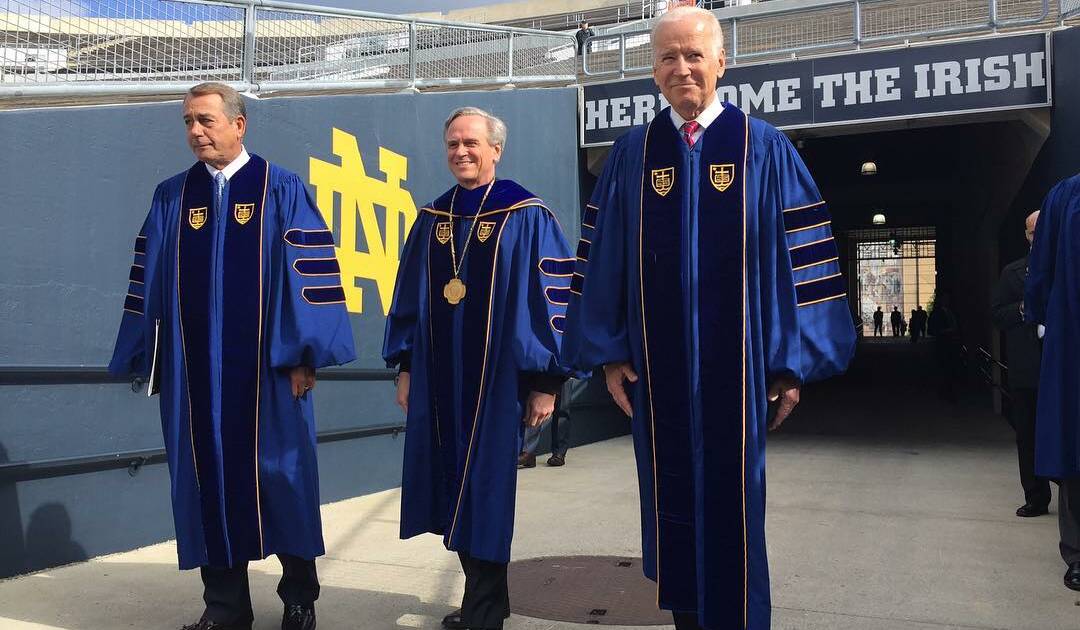 President Joe Biden showed up to the student loan crisis party as he normally does: with Cliffs Notes, half-measures, and poor preparation. What can you expect from a man who spent his entire career in politics, which in its more pure form is the art of applied ignorance?

Waaaay back in April, the White House and Democrats floated this plan to, by executive order, to forgive $10,000 per borrower. This was supposed to take the sting out of ending the current moratorium on student loan collections stemming from the coronavirus pandemic. Except, now Biden is also extending the moratorium, because, if you’re handing out cash, why not? From the New York Times, in April:

Forgiving $10,000 per borrower would require the government to write off $321 billion in loans, according to an analysis released by the Federal Reserve Bank of New York last week. A separate study by the bank found that surveyed borrowers reported a 16 percent chance of quickly missing a payment if the moratorium ended.

Of course, this is popular with many voters, as David Thornton noted yesterday. If the government is handing out cash “to fight inflation,” (lol) why not throw in some loan relief? But you know, making heroin legal would also be popular with a certain class of voters, but that doesn’t make it good—or moral—policy.

Yes, reader, I’ve been sitting on this story since April. I was hoping it would go away and not happen. Silly me, because I know as the year slips by like Biden’s approval rating, his handlers are ever more desperate to do something—anything—to prop up his moribund numbers. And lo and behold: it has, as The Hill reports.

The Reuters-Ipsos poll, which has a credibility interval of 4 percentage points, shows a slow climb in Biden’s polling numbers from last week, when he polled at 40 percent. That stat marked Biden’s highest approval rating in two months.

A hodgepodge of murder-droning a terrorist, passing a rhinoceros-sized health care and tax bill with a sprinkling of Tesla-enhancing pixie dust, and gas prices on the decline (which is not in any way due to Biden), is finally giving the president something besides “I’m not Donald Trump” for his own supporters to crow about. And it probably doesn’t hurt among the scream-at-the-sky club members that Biden’s DOJ is “doing something” to go after The Former Guy. Republican approval, however, is still in the basement at 12 percent.

The loan forgiveness is really engineered to help, in some small way, among the centrist GOP voters, or former Democrats who are sick of progressive idiots actually defunding the police, renaming schools because “Abraham Lincoln” is racist (San Francisco’s school board eventually decided this was too insane even for them), and refusing to enforce even the minimum laws to keep criminals from owning the streets. By taking the focus off these gimme-issues for Republicans, Biden’s team hopes to replace them with this loan forgiveness bone that GOP candidates just can’t resist chewing.

Some pundits, like Erick Erickson, think Republicans should lead the opposition to the loan handout. I think “meh.” I didn’t complain too loudly when during the pandemic, Donald J. Trump handed out billions in cash, several thousand of which ended up in my bank account. I didn’t complain again after Trump failed to pass another round of handouts, then Biden got it done in the first months of his presidency. Of course, I won’t see a penny from this handout. My kids are too young to attend college, and I’m old enough that I’ve long ago paid my loans.

Who benefits? Let’s start with the class of people known as “White House staffers.” Yeoman’s work from Brittany Bernstein at National Review yielded a wonderful fact.

A White House report that detailed the pay of more than 470 staffers last month showed that roughly half of current White House employees make $90,000 or less per year, with the other half making more than $100,000. More than 300 staffers on the list earn less than the $125,000 threshold.

It is not clear how many White House staffers have student-loan balances. One-in-five White House aides required to file a 2021 financial disclosure reported having student loans, according to disclosures reviewed by Bloomberg News. However, only senior or well-paid staffers have to file the disclosures, the report notes.

At least 30 senior White House staffers have student-loan balances, according to the report. However, the staffers mentioned by name in the report — press secretary Karine Jean-Pierre and deputy director of the National Economic Council Bharat Ramamurti — make a yearly salary that exceeds the $125,000 cut off.

I think we can make some educated guesses here, that of the 300 staffers who make under $125,000, at least half owe significant loan balances. So, effectively, these staffers get a raise.

Another related fact: Washington D.C. as a whole has more outstanding student loan debt than any other city in the country—an average of nearly $55,000. If Washington swamp-dwellers could craft any policy that unfairly benefits themselves, this is a good example.

The policy itself is immoral and unfair on its face. It punishes the responsible, who have paid their loans, and rewards the irresponsible. Sure, there’s a bunch of people “in the middle” who get real relief from a system designed to keep them in debt forever. Biden’s team claims that up to 20 million Americans will have their loans wiped off the books, of the 45 million who owe around $1.7 trillion. The forgiveness will take about 17 percent of that total and transfer it from the asset side of the ledger to the liability side, which will need to be funded by taxpayers.

There’s no free lunch. The tuition, books, and living expenses that those loan proceeds paid are long spent. It’s not like any college is going to cough up the money to reimburse the government for the loan forgiveness.

Biden noted how Pell Grants used to cover about 80 percent of the cost of a college degree, and now only cover about a third of the cost. Yes, this is true, but it’s not because of some dark invisible hand. It’s because colleges and universities have gotten fat, greedy, and perniciously happy charging more and more for the same services they’ve always provided, except for more and more people. America’s culture has gone from “you can make a living in a trade or other line without a degree if you work hard” to “without a college degree, you’re going to flip burgers all your life.”

It’s not completely true. A Brookings Institution study found that “overall middle-class stability falls over time, and that college education does not necessarily cushion against instability within the middle class.” The study further found that college education has a larger effect on middle-class stability and the ability to rise out of the middle class on white households than Black—a trend which has shown the “upward channel” weakening for Blacks from the 1980s through the 2010s.

Essentially, the Biden plan—if it survives legal challenges—hands money to white, middle-class families at a greater proportion to other minorities and poor families. It does nothing to reduce the cost of education. Of course, the biggest expense a college has is salary and benefits. And every instructor/professor/department head has a logistical and administrative tail that puts the U.S. Army to shame.

Titles like “vice president for student success” require an office, software, and people to supervise while they do their “success” stuff, whatever that is. And these mid-level administrators get paid well—$150,000 to $200,000 is not unusual. It’s a good gig for people who embed themselves into the educational grift. Forgiving loan balances is not some kind of reset. It’s a lighthouse-bright green beacon for colleges and universities to proceed at breakneck speed to hire more grift-class employees to start more “programs” like the ever-popular “mini MBA” for professionals and entrepreneurs. (See Kennesaw State University in Georgia, Rutgers, Embry-Riddle for aviation professionals, ad nauseam).

These kinds of programs are great for bringing in cash to schools so they can bloat up even more, but they don’t do a thing to reduce costs or provide more educational opportunities for young people who want to go to a good college and find a career.

If the government was really serious about doing more than just giving “walking around money” to voters, they’d invest in things like edx.org, which features free lectures from top schools like MIT, Harvard, Berkeley, and BU. Our college system needs a massive overhaul, and online learning can be leveraged much better to provide it than by teaching kids someone else is going to foot the bill for them to live in a dorm and party.

Biden’s plan puts the onus on non-college educated working people to pay taxes that will be used to “forgive” the debt of their “betters” who may or may not have even graduated. There’s no test for that, by the way; people who failed out still have their loan balances canceled. Some officers in the military who took federal loans (many don’t, or get a full ROTC ride) will have their balances paid by enlisted men. I bet that’s good for unit cohesiveness. The barista at your local coffee shop who can’t find a job in art interpretation or women’s studies will benefit from the pipe fitter who pays taxes so they can continue making lattes. To make that even more heinous, the pipe fitter is more likely to be Black or another minority, while the college-educated barista is more likely white.

I’m sure Republicans will trot out all these statistics and inherent unfairness, but I don’t think it will raise the outrage level. People are just used to the grift game.

I’m not outraged, I’m just sad. We can’t seem to solve anything despite the U.S. having more resources, money, and the best educational institutions in the history of the world. We can’t seem to figure out how to educate the next generation without turning them into cash cows for high-earning middle managers, while associate professors and graduate student instructors struggle to put food on the table. We can’t figure out how to turn out useful high school students from many inner-city and rural schools, while teachers have to pay for classroom supplies out of their own pockets. We can’t seem to separate education from indoctrination and stupid laws designed to protect kids from fringe-weird teachers and actual groomers. Some teachers are so unioned-up that they can’t be fired.

The best our president can do is to hand out $300 billion in cash that’s already been flushed down the toilet, and get the rest of the country to pay for it. I give that plan an F.