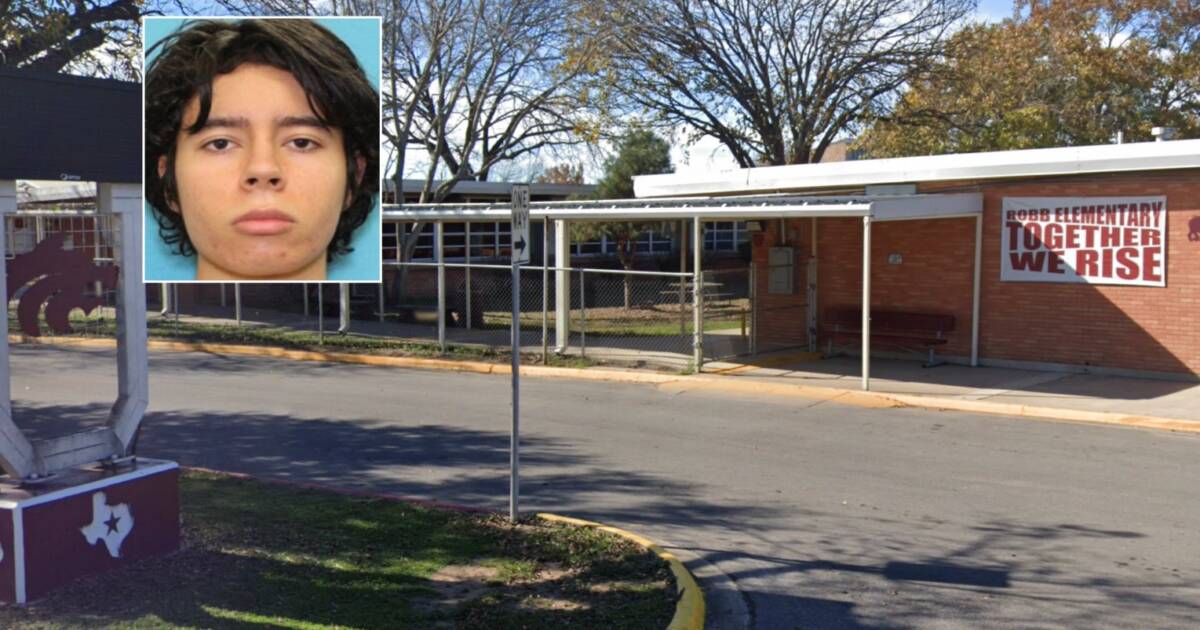 On August 5, 1981, President Reagan fired 11,359 air traffic controllers. He declared a lifetime ban for any controller who was on strike. It’s time to take the Reagan approach with gun dealers. We have to stop the killing of innocent kids. Don’t tell me it’s rare or the product of evil. Of course it is. It must never happen, and certainly not as often as it does. I don’t care if you get angry with me. I care about the lives of kids.

My spirit is grieved. I have a fifth grader ready to “graduate” to middle school tomorrow. In Uvalde, Texas, the parents of 19 elementary school students won’t get to see their kids graduate. Or give them one more hug. I have to send mine off to school today knowing that some nutcase who bought two semi-automatic rifles last week could be lurking down the street. Enough!

Eighteen-year-old Salvador Ramos allegedly bought two AR-style semi-automatic rifles a week ago, along with 375 rounds of 5.56mm ball ammo, according to the San Antonio Express-News. He shot his grandmother and fled in a car that he crashed outside Robb Elementary School. He was engaged by Uvalde Consolidated Independent School District officers as he entered the school wearing body armor and a backpack. Ramos killed 21 people, including a fourth grade teacher who was protecting her students. The horror is unimaginable.

A Customs and Border Patrol officer working nearby responded, shot and killed Ramos. We will likely never know his actual motive, unless he has posted something online to give us a clue. I have honestly begun to lose count of the number of stories like this, with varying numbers of dead, wounded, and permanently damaged individuals—kids like mine. Do you think the survivors are going to have a better time because they lived? PTSD, survivor’s guilt, mental anguish, and unwanted celebrity will follow them for the rest of their lives.

There was a moment when I was reading about this that something inside me broke. You’re going to hear and read a lot about this shooting, from the usual suspects, and from our own writers (see Susan Bagwell’s piece from Tuesday night; David Thornton has one scheduled). President Biden said “it’s time to act.” I agree.

I’ve been a gun owner since I was in my early 20s. My first firearm was a Ruger Mark II, a .22 caliber target pistol. I took NRA gun safety classes. I learned to shoot competitively at a local range in Exeter, NH. I added more guns: a Taurus .357 revolver, and my carry weapon, a Glock .40 that I mostly kept clipped under the steering wheel of my car, or on my person. I sold the Glock and other pistols when I moved from New Hampshire to Georgia, and started over. Now I have a .40 cal Taurus Millennium (I like .40 better than .45 or 9mm). I also own a few rifles, a home protection .30 caliber pistol kept in a biometric gun safe.

I would give up every one of my guns, right now and permanently, if it meant no more elementary school kids would be mercilessly gunned down. But I know that’s not a promise that anyone in our nation can make or keep. If far-left anti-gun activists tell you that we just have to get guns off the street and repeal the Second Amendment, stop listening. There’s over 300 million guns in America. We’re not getting rid of them all.

But we do need to do something. The facts are impossible to ignore.

There are 6,093 hospitals in the U.S. This is a figure kept rather accurately by the American Hospital Association. The government keeps records of individuals holding Federal Firearms Licenses: there were 52,799 at the end of 2020. Not all FFL holders sell guns. Not all who do sell guns have a retail gun shop. We actually don’t know the exact number of gun stores that exist in America.

Politifact took on the trope that there are more gun stores than McDonalds restaurants. They couldn’t come up with a specific answer. The president of the Professional Gun Retailers Association told them there’s around 9,000 “real” gun stores in America. It’s tough to nail down because a lot of pawnbrokers hold FFLs so they can deal in guns. In any case, we can say with some authority that there are more gun shops than hospitals. There are possibly eight times more places you can get a gun than get treated for a gunshot wound. Does this make sense?

I am all for the right of citizens to own guns. But we are far, far too casual about obtaining them. A gun is not a lawnmower or a power tool. It’s a deadly weapon, and the fact that there were in 2020, 10,635 individuals in Texas alone who are licensed to buy and sell guns means one of them sold the weapons that killed 19 children Tuesday.

The Bureau of Alcohol, Tobacco and Firearms, as of December 2019, had 1,714 special agents in the field. The Dallas field division would be responsible for Uvalde. That office handles the territory from Tyler to El Paso, Texas, all of Oklahoma and half of New Mexico. There are likely around 7,500 FFL holders that this one office has to deal with. I’m sure the men and women of the BATF do a good job and work hard. But a couple of hundred agents monitoring about 40 dealers each, plus all the illegal activity in their territory is not enough.

However, the answer isn’t more agents. It takes time and infrastructure to train agents, plus it creates a police state building huge law enforcement organizations. America has too much of that. No, we need less FFL holders. If I had my druthers, I’d have Congress pass a new law regulating gun dealers. I’d have that law invalidate every FFL in the country, with a fairly short lead time. Every FFL holder would have to reapply, with priority given to sellers who have brick-and-mortar facilities, computerized records, and impeccable histories. If an FFL holder hadn’t sold a gun in the past three months, they wouldn’t qualify. I’d eliminate most pawnbrokers from dealing in guns. I’d hold FFL holders to the same standards for continuing education as we do CPAs, attorneys and doctors.

We need to get the number of gun dealers in America down to under 10,000, or ideally the same number as we have hospitals. I wouldn’t change a thing about instant background checks, but I would assign BATF agents to be visible and vigilant at gun stores. The salespeople would require training on psychology and signs of people like Ramos. I’d bring in some consultants, like the folks the Israeli Army uses at Ben Gurion Airport to interview passengers, to train specific interviewers. Some customers would need to sit down and endure some questions. Those who “fail” would be referred to the BATF or the FBI for further review. Would that be intrusive? You bet. Would it violate anyone’s rights? I don’t think so. Nobody has a right to plan and execute carnage.

And don’t talk to me about abortion to change the subject. I know the far-left uses the same language to refer to gun culture as the right uses to describe the cult of Molech committed to killing fetuses and fully formed babies in the womb, while maximizing self-actualization through promiscuous sex. I know they refer to gun enthusiasts and home protection as a cult treating the slaughter of innocents as a problem of any kind except a gun problem. Both sides retreat behind euphemisms like “evil” and “racism” when challenged with reason and facts.

If you’re all up in arms over “don’t ask me why I’m buying a gun,” then don’t get all up in arms over laws that protect women seeking an abortion from being asked the reason they want to terminate their child growing inside. There’s far more brick and mortar gun superstores than there are places that perform abortions. I would rather that there are no dedicated abortion clinics, and that women could go to a hospital, give their reason, receive counseling, and only in the case where other options don’t exist, get the procedure. With guns, I have no problem creating inconveniences, for myself and others, if it will stop people like Ramos.

Enough is enough. I can’t stand outside my kid’s school with a rifle, and if I did, I am not sure I could protect him. The next shooter might take me out from behind and then waltz in. Or perhaps, the musician with a guitar case might eat a bullet because I thought he had a rifle. It’s a bad idea to engage in vigilantism, but if we don’t do something, that’s where we’re headed.

We can’t (and shouldn’t) take all guns off the street, but maybe we can take the next shooter’s gun out of his hands before he buys it (or she, but just about all these killers are men or boys). We can’t create a police state with the government climbing down everyone’s shorts in a witch hunt that targets law-abiding citizens. But we can make it easier for the BATF to do its job. We can eliminate most pawn shops as a source for gun purchase. We can get rid of gun show sales (mostly by making the number of dealers who can sell there a smaller number, and forcing the actual transfer to happen at a brick-and-mortar store). There’s plenty of things you can buy at a gun show that isn’t a gun (accessories, sights, holsters, targets, stocks, trigger kits, magazines) or ammunition.

It’s time to overhaul our gun dealer laws and make every dealer reapply for an FFL. It’s time to train interviewers and salespeople to recognize signs of people who shouldn’t be buying firearms, regardless of their clean legal record. It’s time to stop the killing.