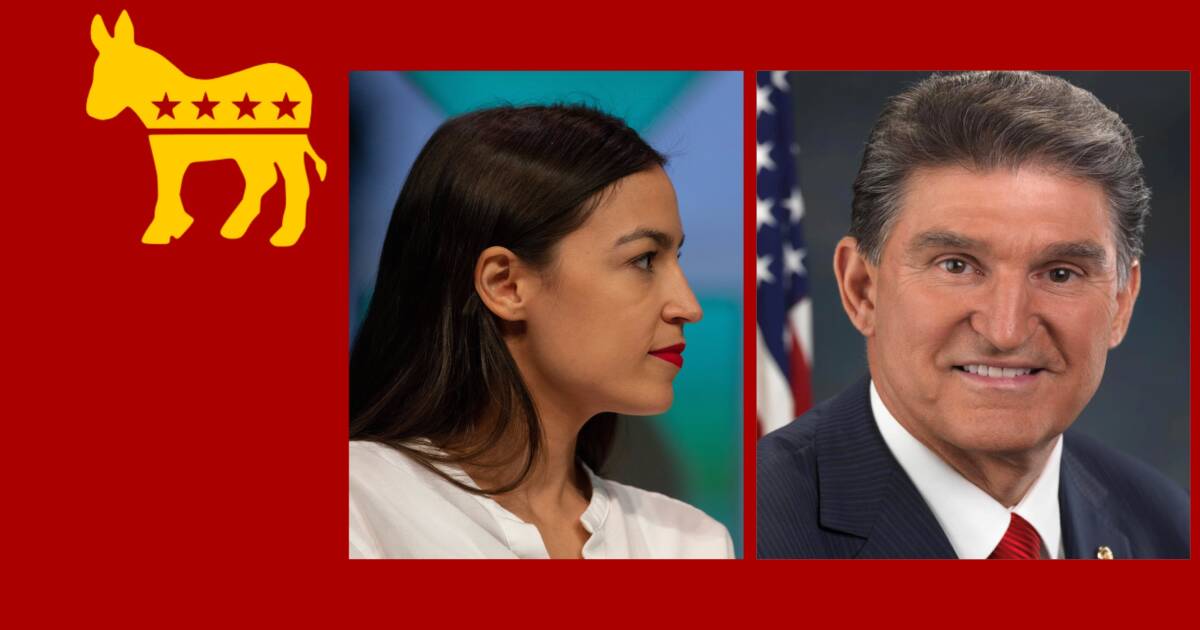 It’s a weird time to be a Democrat.

You won’t see this in the talking points that are dutifully regurgitated by CNN, MSNBC, and the rest of the liberal media cabal, but the reason President Joe Biden’s “agenda” has spectacularly failed has nothing to do with Republicans. It’s all on Democrats, and the party is visibly cracking up.

Republicans don’t control the House of Representatives, and only by dint of the filibuster does the GOP exercise any power at all in the Senate. Despite a full court press of pundits, editorials, and rhetoric from the White House blasting the 60-vote threshold, Sens. Krysten Sinema and Joe Manchin have pledged to keep the filibuster right where it is.

Now Manchin has reached across the aisle to endorse Republican Sen. Lisa Murkowski’s re-election bid, calling her “my dear friend.” Honestly, it’s good to see people of different political party stripes calling each other “friend,” and realizing that it takes two to tango, and two parties to agree on anything substantial in American politics. Manchin has a history of reaching out to Republicans with whom he shares centrist views on fiscal responsibility, and geniality in government. In 2020, he supported Maine Sen. Susan Collins re-election.

But the new crop of Democrats who grew up under the propaganda machine of Barack Obama only know one way to make law: shove it down the throats of Republicans. They only know how to rule by fiat over the American people. There is no room for people like Manchin in Alexandria Ocasio Cortez’s Democratic Party.

There’s also no room for long time Democrat Rep. Henry Cuellar, who has represented Texas’ 26th district since 2005. Cueller, a lawyer who served as Texas Secretary of State under Republican Gov. Rick Perry (who went on to become President Trump’s Secretary of Energy), beat Jessica Cisneros, a 26-year-old civil rights attorney who was backed by AOC’s “Justice Democrats” in 2020.

Once again, AOC is backing Cisneros, because “Justice Democrats” is really a socialist PAC filled with Bernie Sanders supporters, who have been trying to transform the Democrats into a leftist mob since 2016.

The Democrats are divided on Cuellar, who has been endorsed by Speaker Nancy Pelosi and House Democrat campaign chief Rep. Cheri Bustos. Pelosi’s words of support for Cuellar at the Texas Tribune Festival, a political event, were met with “scattered boos” according to the newspaper. AOC and Cisneros are trying to link Cuellar to Trump.

Cisneros is arguing Cuellar is too moderate for the 28th District, calling him President Donald “Trump’s favorite Democrat.” Cuellar is denouncing the challenge as meddling by out-of-state partisans who do not truly understand the district.

Remember, Cuellar is a Democrat. At the same event, Bustos said he “has very good relationships with the vast majority of his colleagues.” By “colleagues,” she presumably meant “other Members of Congress.” And to the radical left AOC crowd of socialists, cavorting with Republicans in any way is considered fornication–a sin against their progressive agenda to rule America.

Crossing the aisle is not acceptable to Democrats like AOC, though Pelosi is still sticking with incumbents. The Speaker is talking out of both sides of her mouth, knowing that by this time next year, she will likely no longer be in the controlling party. Democrats need long-time reps who can work with Republicans, or the remainder of Biden’s presidency will be doomed to be worse than the first year (it’s hard to imagine, I know).

Republicans have problems too, with the censure of anyone remotely not on the Trump train, like Reps. Liz Cheney and Adam Kinzinger. I take issue with this, as we know Democrats will hang Trump around the neck of even their own candidates, given their weaponization of January 6th. Why would Republicans help them fashion the noose? It doesn’t make sense to me. Both parties need people who can work with the other side.

But here’s the difference. Like Trump or not, he’s old. He will fade from the stage. Though there’s some belief that Trump can run and win in 2024, that’s a pixie dust idea. Too much damage has been done with the events between November 3rd, 2020 and January 20th, 2021. While Trump might enjoy support from the same core of supporters he’s had for six years, he will not carry the nation in 2024. The sooner the GOP realizes it’s time to move on (and not to a Trump-anointed, handpicked successor, who will suffer the same fate), the better. It’s counterproductive to fight these internal battles, but it’s not a long-term crackup.

With the loss of “daddy” Trump, his acolytes like Reps. Madison Cawthorne and Matt Gaetz will have to fight on their own. I’m not sure either of them could fight their way out of a paper bag without help. I do have more faith in Gov. Ron DeSantis, and even former Sen. David Perdue. For a time, they are all-in Trumpists, but they are also their own man. When Trump fades, I believe they’ll return to their nature.

With the Democrats, AOC and the younger radicals are not going anywhere. They are not affecting a nature to take political advantage like the Republicans I just mentioned. This is where the Democratic Party is going: hard left, intersectional, state-your-pronouns, hypocritical greenie, race identity politics to the end. The problem is that the traditional Democrat voting blocs such as the hispanic and Black votes are not blocs anymore based on those new priorities. The wars Democrats are fighting will pit these groups against their agendas, and split the Democrats.

The fight over Texas and West Virginia will probably not go AOC’s way, this time. But the longer these young progressives are in office, the more they will tug. Eventually, all Democrats will end up like them. Until then, we will see the crackup of the Democratic Party, where anyone who doesn’t fully agree with even their most moonbat beliefs will be called a racist, Trumpist, Republican-loving fascist.

It will be a genuine spectacle when the “big tent” burns.