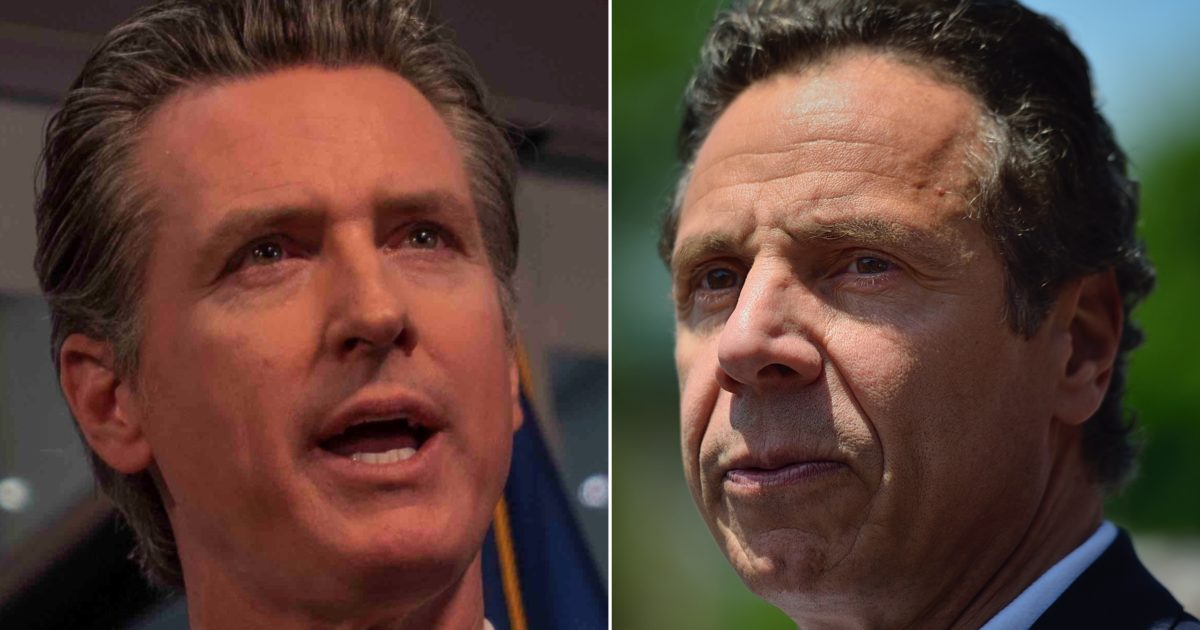 Governor Gavin Newsom is facing a serious threat of recall in California. Meanwhile, his east coast opposite Governor Andrew Cuomo is sitting pretty even after admitting a China-sized coverup of coronavirus deaths. Such is the will of the unrestrained mob pushing politics to the edges.

As governors go, California’s Newsom has been doing a decent job dealing with coronavirus. As states go, California is not centrally ruled by the Sacramento crowd, but more populist in its power structure. Newsom can’t help it when the Los Angeles Unified School District caves to powerful teachers unions, for example. At the start of the COVID-19 pandemic, he locked down the state, and opened slowly, then locked down again when partying kids and holidays sparked a surge.

In fact, according to the Public Policy Institute of California, Newsom’s approval rating has actually increased since January 2020, though it has plummeted through the summer and fall. It’s the recent plummet, not the long-term steady rise, that’s sparked the populist revolt to remove him.

The recall effort is real, and it’s gaining steam in a virally-social way that things like this happen in California. From Politico:

“This public report does show a very high validity rate but their ultimate success relies on a few things: what happens to their response rate and what happens to their validity rates as they need to broaden their audiences out past just the hardest-core anti-Newsom audiences?” said Ned Wigglesworth, a consultant who is not affiliated with the campaign. “This huge flag is, as they work their way through the voter file, have they gotten this low-hanging fruit?”

Of course, many in the liberal-leaning media have attributed the entire recall effort to Trump supporters. But though it offers a compelling narrative, I find it difficult to believe that Trumpists can get over a million signatures on a recall petition, 600,000 of which have been verified by county registrars.

The mob in California, once it gets rolling, tends to have a momentum of its own. Newsom’s days, despite his fairly decent performance with coronavirus (I don’t agree with everything he’s done), may be numbered.

Contrast this with New York’s Andrew Cuomo, who benefitted from his journalistically and politically unethical relationship with his brother Chris Cuomo at CNN, and published a book of “Leadership Lessons” as if he were Caesar returning in a Triumph.

Predheep J. Shanker’s video called Cuomo one who was “a villain all along.” James Tedisco, a state senator from Glenville, NY, called for a bi-partisan, independent investigation with subpoena power to look into Cuomo’s cover up of nursing home deaths due to his catastrophic leadership in the coronavirus crisis.

“The Governor has said that everything he knows, the public would know and that there’d be ‘total transparency’ on the coronavirus. His actions bely his words. It’s been over five months since our FOIL request of the DOH was made to learn what the true number of nursing home residents is who died in the first wave of the coronavirus but the Cuomo Administration continues its cover-up, stonewalling and obfuscation. History has shown that the cover-up is often worse than what’s being covered-up. Sadly, a lack of transparency has been a hallmark of this Administration. Enough stalling. We need to get the facts so we can provide a measure of closure for the families who lost their loved ones and help prevent this from happening again,” said Senator Tedisco.

Has this scandal harmed Cuomo with voters? Umm, no.

The latest polls show that his favorability rating has held pretty steady, even rising slightly.

It makes no sense to me that New Yorkers could put up with a guy who lied to them, over and over, about his own decisions and the morbid results of his mishandling of COVID-19. Two things may explain this. New York is about as institutional as a bunch of Wall Streeters, Manhattan lawyers and upstate Yankees can be. They’re also very jaded and cynical about politicians. The fact that Cuomo would like and literally consign people to death is just another “meh” to many partisan New York Democrats. “At least he’s not Trump,” right? Then again, Bernie Sanders—though a Vermonter, is really a New Yorker, along with Trump and AOC. And don’t forget Rudy Guiliani and current disgrace as a mayor Bill de Blasio.

New Yorkers love their characters, and even the villains get a certain respect. History might show Andrew Cuomo near the top of the villain list.

New York has suffered 1.45 million COVID-19 cases and 43,842 deaths since the beginning of the pandemic. Current statistics show 155 deaths, with a seven-day average of 172. New York has rode the second wave fairly well.

California, on the other hand, is spiraling wildly. With 3.38 million cases, it’s now rivaling New York at 43,062 deaths, 628 deaths as of February 4th, with a seven-day average of 505. New York is trending down, and California is trending up.

Gov. Newsom is locking down his state again, and he’s being punished for doing the right thing, because California is mob-ruled. Cuomo turned New York’s nursing homes into death camps, lied about it, covered up the numbers, and published a book about his own heroism. His own state is doing much better than California, in many ways because of climate and demographics. Yet New Yorkers can’t recall a governor.

Even if they could, they wouldn’t.

The mob doesn’t always make the best decisions. In fact, it almost never does.