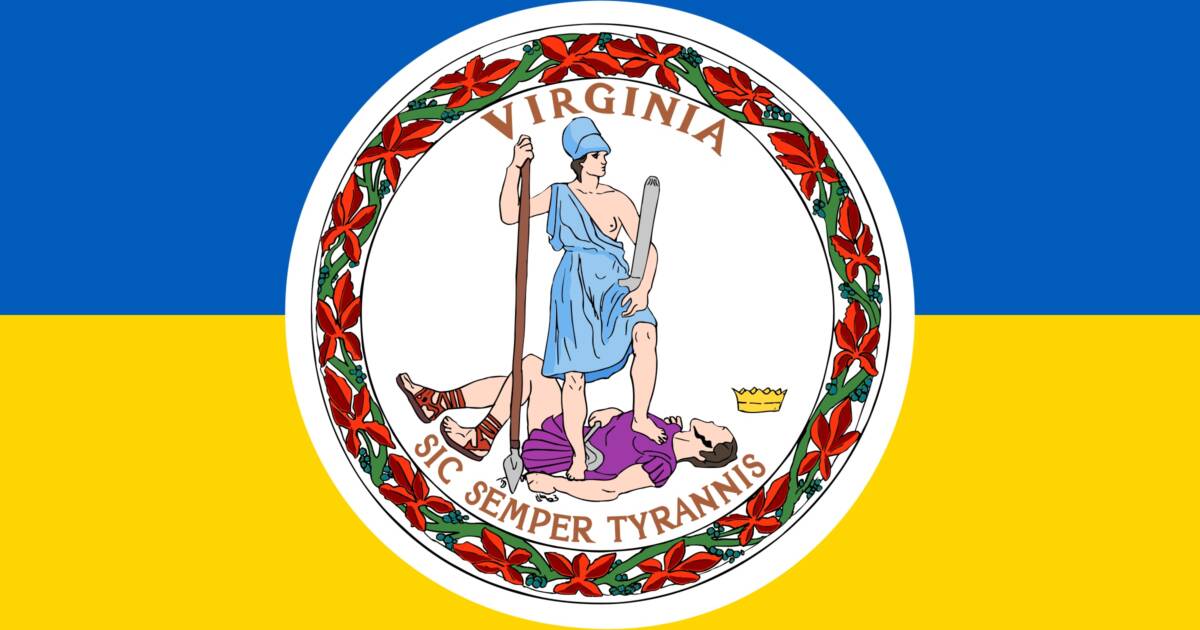 I’ve been struggling with something that seems to have been hand-waved away for now, given that we pretty much know Vladimir Putin’s intentions, seeing them with our own eyes. But I ask myself why, because everything that’s so obvious to so many before the Ukraine invasion points to a bad outcome for Russia and Putin. How could he have missed it?

What’s playing out now is the motto of Virginia: sic semper tyrannis, thus always to tyrants. The seal depicts Tyranny defeated under the foot of the Roman goddess Virtus, her sword sheathed and resting on her spear. She is not ready for battle; the job is done. Tyranny’s crown is laying on the ground.

I feel for the Ukrainian people because they are suffering. It’s likely that Putin’s army (I hesitate to call it the Russian army, which insults decent Russians) will raze Ukraine’s cities to the ground in an effort to “depopulate” them. There is no path for Putin besides carrying out this grim war to its conclusion, and losing that war is going to be much worse for him than it was for King George III. He may still lose.

Why he chose to commit this brand of national suicide gnaws at me. Just about a month ago, I wrote how Putin would never go for a full invasion, because it’s bad for business. I’m not the only one who saw this. Matt Taibbi spent years living in post-Soviet Russia, even in St. Petersburg when Putin was mayor of that city.

War, you see, is bad for business if you’re Vladimir Putin. Russian weapons don’t do well against modern NATO gear. If you only read cynical Russophiles like Matt Taibbi, you’d think America’s failure to win in Vietnam, Afghanistan, Iraq and Syria was the result of military ineffectiveness, incompetence, or misuse. It’s none of the above. Where and when the U.S. military chose to apply its power, we always won in every case. Our failure has always been political, not military; since the fall of the Soviet Union, NATO has always been the strongest tribe.

Russian weapons, though plentiful, have not performed well against NATO arms, and not just American-made. Turkish drones, UK-produced NLAW anti-tank missiles, and Polish weapons have wreaked havoc on Russian columns and formations. Putin’s army invaded with less than a week’s worth of food and fuel; he delayed the jump-off date because China asked, and used that time to bolster medical supplies.

Putin thought this operation would be a two-day, paratrooper and Spetsnaz-led decapitation, like it was in Georgia in 2008. But why did he think that, when the U.S. intelligence community exposed all his plans, ruses, and false flags for the world to see, and Ukrainian President Volodymyr Zelensky prepared his military, and his civilians, for two years for this event?

I found my answer from my 12-year-old son, who plays trombone. Anyone who plays a brass instrument knows the word blat. To blat with a horn is a bad thing (I can’t even find a video of someone doing it because it sounds terrible); the player blows too hard in the mouthpiece and the result sounds like elephants in distress. But he said blat also means something bad in Russian, as in “blat you, Russian warship!”

Being a word geek, I looked it up. Maybe in some slang form, blat (or cyka blyat) is a curse word, but it really refers to money in the favor bank, or to a network of powerful friends. The word is a Soviet holdover, but it still applies today. The new Russian economy (before Saturday) ran very much on blat. The oligarchs got their money by raiding the corpse of the USSR, and Putin built blat.

Putin’s blat was what got things done. He wanted to invade Ukraine, so he got the parliament to declare the Donetsk and Luhansk regions as independent states, and to give him the color of law to use his army to invade. It was to this action that Donald Trump responded as “genius.” Putin had plenty of blat with Trump (though it didn’t work in the other direction).

What Putin didn’t calculate was that the West has blat too. Remember that Putin has been a singular presence in Russia since the 1990s. He has dealt with U.S. presidents from Bill Clinton to Joe Biden. He has plied our politicians with cash, influence, uranium deals, lobbyists, and threats. He has seen how the Europeans can’t agree on the time of day, monetary policy, energy, culture, or anything. He has seen how the last three U.S. presidents have made the old NATO alliances largely irrelevant, and how Trump in particular alienated European leaders.

Putin didn’t believe the West had blat. He fell for his own groupthink, that blat was only derived from personal self-interest or narrow national security. Since Russia wasn’t going to attack Germany, why would Germany rush to the aid of Ukraine? Putin never saw the enormous economic sanctions coming because he believed the West was incapable of acting in concert on them. He believed there was no blat.

I give a lot of credit to President Joe Biden for exposing Putin’s naked ambition and trying to disabuse him of his delusion. I give incredible credit to President Zelensky for preparing for the invasion, and also igniting his people to mount an effective defense. Zelensky’s brand of propaganda, and his expert use of media and oratory provided the medium for the West’s blat to flow. (That, plus Zelensky’s devotion to his country, and personal bravery, of course.)

Ukraine would love to have foreign boots on the ground, but here’s the problem with that. Once one nation puts its own soldiers in harm’s way, then by definition, the nations who didn’t sacrifice blood are on unequal footing and owe blat to the nations who did. The only way to maintain the pressure is for the entire West to act in concert. The West acted decisively, in concert, and Putin couldn’t see it.

As weapons freely flow into Ukraine, foreign fighters—volunteers— are coming. They are joining the Ukrainian defense, but not because they are being sent. They are being called; they are building blat. Perhaps this will help turn the tide or delay Putin’s goal. But the longer Putin takes, the most it costs him, and ordinary Russians, in blood and treasure.

When the body bags start piling up in Russian cities, with no access to western goods, worthless money, and life reverting back to the old Soviet system, will Russians rise up? How can Putin govern his own nation without going back to communism, or some form of feudalism? Capitalism doesn’t flourish under poverty and tyranny, and even the oligarchs will soon feel a lot of pain. If I have to make a prediction, I don’t think it will end well for Putin.

Putin has spent all of his blat on Ukraine. He thought the West had none, but he has found that the blat of the West is stronger than his own. Sic semper tyrannis.