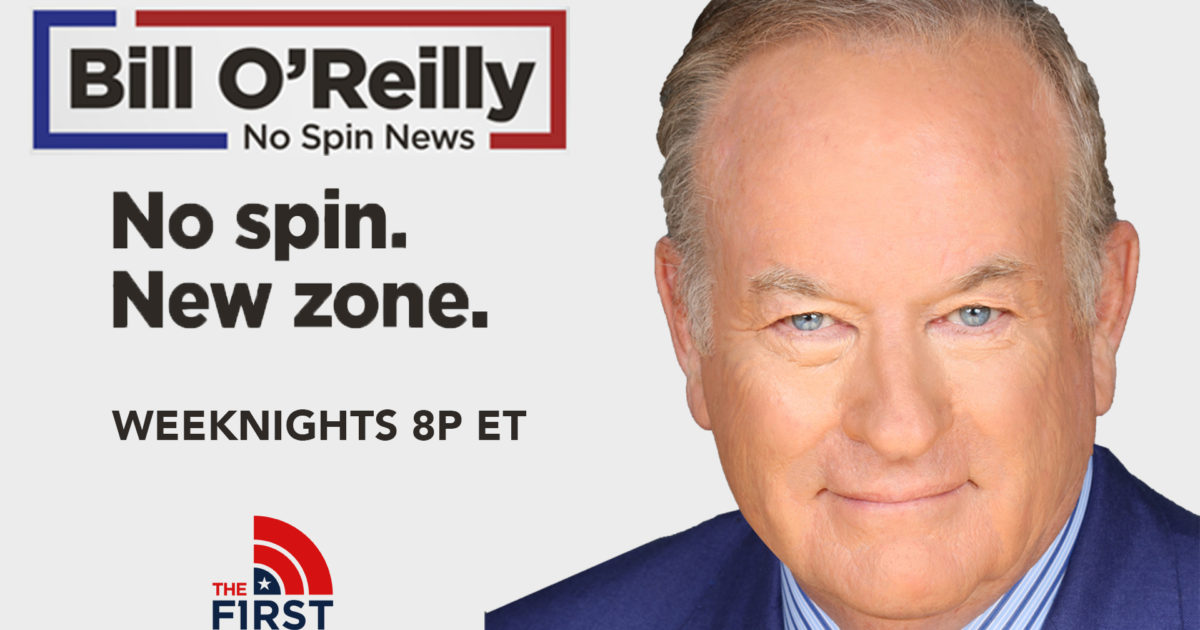 Our commitment to you, our audience, is something we take very seriously. From the beginning we’ve been dedicated to free speech, big ideas, and bold opinions. That’s why we couldn’t be happier to welcome O’Reilly to our family and our lineup.

Starting today, O’Reilly’s program, “No Spin News,” will air twice daily at 8pm ET and 11pm ET. You can watch the show, as well as all other The First programming, for free on ourwebsite, apps, and digital platforms, as well as on platforms Pluto TV, STIRR, and DistroTV.

O’Reilly’s success in broadcasting and publishing is unmatched. The iconic anchor of “The O’Reilly Factor” led the program to the status of the highest-rated cable news broadcast in the nation for 16 consecutive years. His daily radio program, “The O’Reilly Update,” is heard on over 200 affiliates nationwide. Bill has authored 15 #1 bestselling books and has over 17 million books in print. He has been a broadcaster for 45 years and has been awarded three Emmy’s and a number of other journalism accolades. He was a national correspondent for CBS News and ABC News as well as a reporter-anchor for WCBS-TV in New York City, among other high-profile jobs.

“The success of BillOReilly.com with millions of users will now accelerate with our partnership,” O’Reilly said of the big announcement. “The First will create and distribute honest, corporate-free news and commentary which is desperately needed in America.”

As you know, The First is custom designed for the unique needs of next generation platforms. We produce over 45 hours a week of original content, including a mix of long-form studio shows and short-form commentary designed to keep you engaged throughout the day. The First, and its network of talent and contributors, reach over 25 million Americans per month, generating over 250 million monthly impressions across its digital network and providing an ideal place for advertisers to reach the next generation of conservative consumers.

The First is a multi-platform television network focused on delivering bold and unfiltered analysis and opinion for parts of the country often ignored. The network debuted on Pluto TV in October 2019 and distribution now includes DistroTV, STIRR, YouTube, Facebook, and The First’s mobile and connected TV apps. Led by a highly experienced management team with a proven track record of success and a passion for reaching typically overlooked segments of news consumers, the network produces over 45 hours a week of original content.