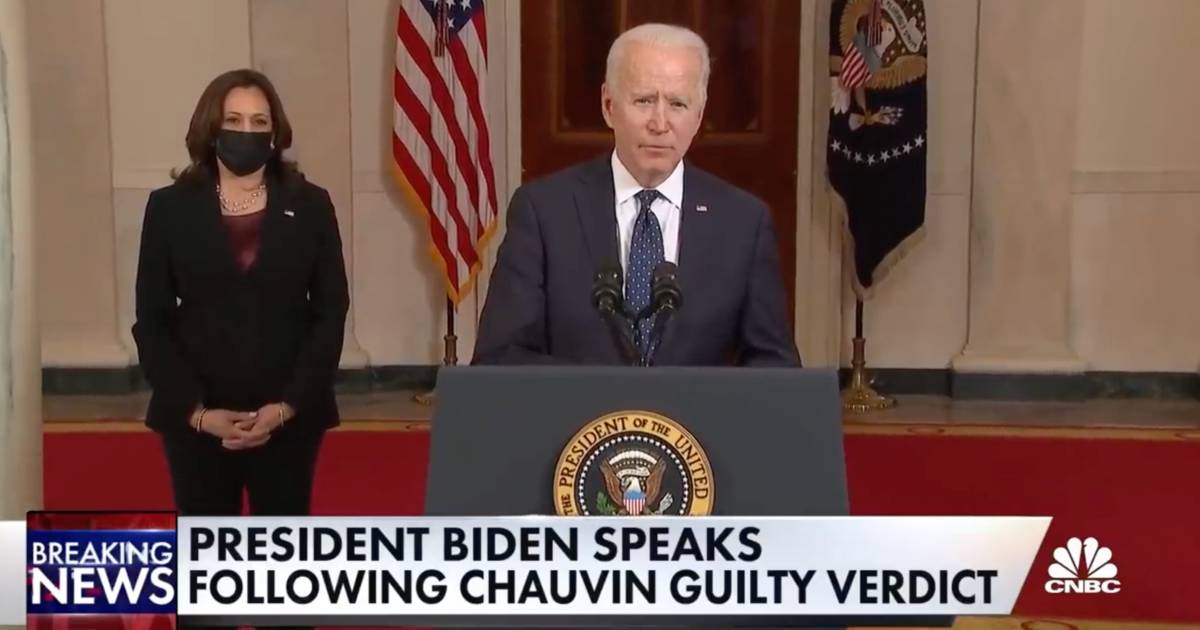 The jury got it right with Derek Chauvin. That was a step forward. President Biden got it wrong in referencing “systemic racism” in his remarks. That was a leap backwards. Weaponizing police brutality and attributing it to racism will only make our problems worse.

Regarding Chauvin: Justice was done, as my friend David Thornton wrote yesterday. It is exceedingly difficult to obtain convictions in cases against police officers acting in the line of duty. The New York Times correctly called it a “rare rebuke of police violence.” It was the video that made all the difference. Erick Erickson noted this morning (subscription required):

How many are dead unjustly because they were not seen, were not recorded, and were forgotten?

It’s not so hard to obtain murder convictions against regular citizens, even without video. That is, if the police can solve the murder and catch the murderer. The problem with police murdering civilians is one of motive: If you assume all officers have racial animus if a white officer kills a Black suspect, then the answer is, as we’ve heard for a year, to disband the police.

But disbanding, defunding, or rebuking the police into fear of repercussions and mobs leads to more crime by criminals. Look at Chicago. Over the past year, 585 Black men, most ranging in age from mid-teens to late twenties, have been murdered. Nearly two hundred were shot.

The Chicago Sun-Times has tracked and mapped every murder (their total is 175 versus 177 for the Chicago Tribune.) Adam Toledo, a 13-year-old Black kid, was shot by a white police officer, at around 2:30 a.m., while he was ditching a gun after running from the officer. An analysis by attorney Patterico put the officer’s actions into perspective—he literally had less than a second to determine if Toledo was a threat to his life.

Try this experiment: grab a phone and open a stopwatch app. Hit “start” and think to yourself — as fast as you possibly can, but without speaking out loud — the words “oh shit he’s got a gun I’d better fire” . . . and then stop the stopwatch. Do it several times. When I did it, I tended to get between .75 seconds and around a second or so. Racing my mind as fast as I can, I can’t even think those words much faster than 839 milliseconds.

None of this matters, however, if you start with the assumption that the white CPD officer is racist and looking for a reason to shoot a young Black man. If the motive is “institutional racism” it doesn’t matter if the officer is doing his job, or making a horrible mistake like Kimberly Potter, who killed Daunte Wright after drawing her gun instead of her Taser.

If the motive is “institutional racism,” then the institution provides the reason for the killing, and the officers are simply instruments of racism armed with deadly weapons and color of law. Of course, claiming this makes any jury’s work really easy. Ignore the facts, ignore the law, and convict, or the mob will descend and burn your city to the ground.

This is what Rep. Maxine Waters was promoting when she suggested protesters should “get more confrontational” if Chauvin was acquitted. Even the judge in Chauvin’s case recognized the (legal) prejudice in this statement, and feared it could affect the outcome of the case, in an appeal. It could. And then what Waters suggested would become prophetic reality, as riots would break out.

President Biden said “systemic racism is a stain on our nation’s soul,” in his remarks following the Chauvin verdict.

“We can’t stop here,” the president said. I agree with the sentiment that America must confront racism and hate to “change hearts and minds as well as laws and policies.”

But to begin real discussion, politicians must stop weaponizing racism, brutality, and corruption. President Biden’s remarks about “systemic racism” are not helpful in this discussion, because of what I wrote above. What makes America and many of our allies safer and, yes, better, than other nations, is that our police forces are not generally corrupt. American police are more confrontational than, say, British or Australian (or even Canadian), but it’s not like Mexico or Turkey or Russia, where police openly accept bribes, extort payments, and participate in crime.

Frank Serpico’s moral courage is more the rule than the exception, and honest, well-trained officers are more common today than ever before. Yes, there’s still a “blue wall of silence,” but it’s less relevant today than ever. Body cameras, dash cams, and ubiquitous security video footage, along with thousands of smartphone cameras makes it much more difficult to hide actual corruption and racism in policing.

The Chauvin case and its outcome should be an inflection point in transparent policing, and lead to more funding of police, more transparency, and greater accountability. It should free police to do their jobs with confidence, knowing that when tragic mistakes are made (like Potter killing Duante Wright), justice will be done without regard to the mob.

It should free Chicago police to make snap decisions, which may be gut-wrenching to see but correct. Why was a teenager roaming the streets with an older criminal, being his gun mule, at 2:30 a.m.? Who put the teen in danger, the cop, who was responding to a call of shots fired, or himself, who ran, with a gun, in the middle of the night, and only ditched the weapon when the cop shouted to see his hands? We know the answer.

The weaponization of “systemic racism” as the motive for all police shootings takes away the ability for police to function. It leads to crime sprees, inability to recruit, hire and train new officers, like in Atlanta, and more racial division in communities, among police departments, and in our society.

With Derek Chauvin’s conviction, the fight for police accountability took a step forward. But with Biden’s remarks, the fight for racial healing, law and order, and common sense, took a leap backwards.