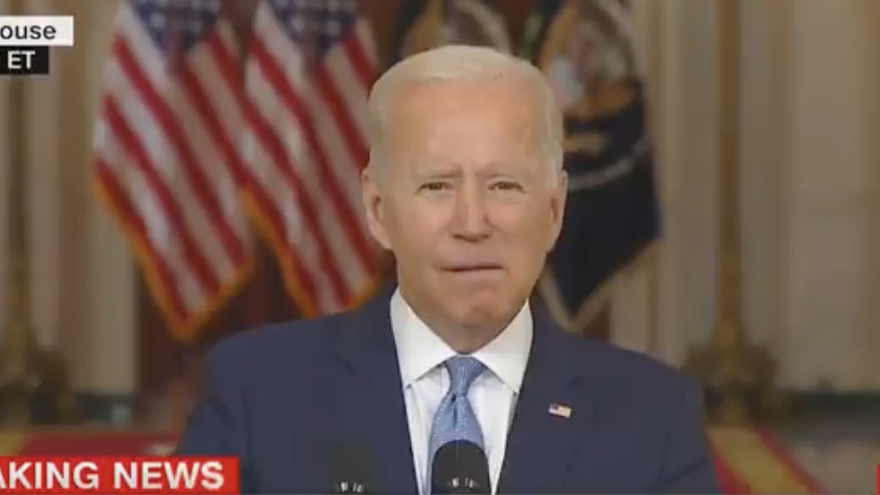 Joe Biden was Vice President of the United States during the biggest American surge in Afghanistan, when troop levels hit 100,000. Biden was Vice President when U.S. envoy Chris Stevens arrived in Benghazi, Libya in April 2012, at the height of the war, and after extremists deposed evil dictator Moammar Gaddafi. On September 11, 2012, the U.S. consulate in Benghazi was attacked by a well-coordinated group, and the Obama administration tried to pin it on a little-known anti-Muslim video.

Hillary Clinton was blamed, but it was really the White House and Ben Rhodes orchestrating Susan Rice and the false video story. Joe Biden was Vice President during all of this. He’s been through his share of cover-ups.

Suddenly, Joe Biden, as President of the United States, decided that the war in Afghanistan needed to end on his watch, but that his hands were tied because of a deal former President Donald Trump worked out with the Taliban. He gave a speech to that effect, speaking out of both sides of his mouth. My colleague David Thornton opined yesterday that the speech largely “rings true.”

The only truth that Biden spoke is that “thirteen heroes gave their lives.” Everything else he said was part of the coverup, the spin to blame Afghanistan on the Trump administration. I could write five thousand words taking apart Biden’s speech sentence by sentence, but thankfully for you, reader, I don’t have time to do that this morning.

Fortunately, there’s a plethora of sources who question the president’s version of events. Even left-leaning Politico noted how Biden broke his promises from just weeks ago to get every U.S. citizen out of Afghanistan. In truth, Biden was not operating on Trump’s timeline (which set a May pullout date), but on the Taliban’s August 31 timeline. We were ordered to leave the country ahead of our own September 11 target, and we complied in total surrender.

The heroic efforts of the U.S. military, along with all the contracted airline flights, many of which flew under capacity, are to be no less celebrated, but let’s not mince words: The heroism was necessitated by the gross incompetence and even malfeasance of the Biden White House.

RedState is reporting that one former DoD high level staffer claimed the U.S. had the ISIS-K bomber locked in by a Predator drone, but was refused permission to pull the trigger. If true, this will be just one more chapter in the anthology of failures by Biden’s White House and the Department of Defense.

In his speech, Biden said:

The Taliban has made public commitments, broadcast on television and radio across Afghanistan, on safe passage for anyone wanting to leave, including those who worked alongside Americans.  We don’t take them by their word alone but by their actions, and we have leverage to make sure those commitments are met.

Meanwhile, reports are rolling in from all over Afghanistan that the Taliban is going door to door, looking for those who helped America and our allies during the 20 year occupation. Taliban soldiers, many armed with U.S.-bought weapons, are executing people. They are beating and raping gay men. They murdered a comedian for “poking fun” at the Taliban.

Nobody believes the Taliban, and their actions are not in line with whatever “commitments” Mr. Biden referred to.

A group called “Flag Officers for America” consisting of 130 retired general officer-ranked individuals, American military officers, signed a letter calling for the resignation and retirement of Secretary of Defense Lloyd Austin and Chairman of the Joint Chiefs of Staff Gen. Mark Milley.

This is a letter from 130 lifelong military members who had risen to the highest echelon of their respective service. They called for “accountability at all levels for this tragic and avoidable debacle.” How often does a letter like this circulate?

Far from just a few hundred dual-citizens who wanted to stay behind, as Mr. Biden claimed, there are thousands of citizens and green card holders who wanted to leave but were ignored in the rush to get out of Afghanistan. The Biden administration directed the DoD to cut troop levels and choose to man either Bagram Air Base, or to manage security in Kabul at the airport and the embassy. They could not do both.

The military chose Kabul, and left Bagram in early July, in basically a midnight bug-out. Without Bagram, our ability, and the ANA’s ability, along with our allies, to launch air strikes, coordinate secure movement in and out of the country, and provide a safe space for refugees, was lost.

Meanwhile, green card holders are stranded. Note that green card holders are permanent U.S. residents. They are not special refugee visa holders—they are approved by the U.S. government to live in the United States for the rest of their lives, to raise their families here, to live and work here. While the Biden administration pushes to accept any undocumented alien on our southern border, thousands of legal residents who flew to Afghanistan to gather their families and belongings, are now trapped and possibly doomed to a future under Taliban rule (and for some, a very short life).

The message from Biden’s State Department: “Keep a low profile.”

President Biden was also not beholden to President Trump’s timeline. Trump negotiated directly with the Taliban because, after years of attempted negotiations between the U.S.-supported Afghan government, the U.S. itself, and the Taliban, no agreement could be reached. These negotiations began in 2012, under President Obama, when Joe Biden was Vice President.

Joe Biden was part and parcel in the know from the beginning on Afghanistan. He was the number two official in the Obama White House for eight years.

After years of failed attempts at negotiation, President Trump simply bypassed the Afghan government and went directly to the Taliban, and the condition for that was the release of prisoners (which the Taliban had always had as a condition). Granted, the prisoners were criminals who raped, murdered, and dealt drugs. But let’s say that Biden ordered the U.S. to leave Afghanistan without any agreement in place with the Taliban—do you think that these prisoners would have remained in prison after the U.S. was gone and the Taliban took over?

Anthony H. Cordesman, the Arleigh A. Burke Chair in Strategy at the Center for Strategic & International Studies, wrotein October 2020:

The Taliban, the central government, and most Afghans already understand these realities. The question is what – if anything – can be done at this point to make fundamental changes that will produce a real and successful peace – and the probable answer is not enough. There is very little time for real negotiation – if they are possible – and there is an immense gap between the ideology and values of the Afghan central government and the Taliban.

Biden’s claim that Trump’s prisoner release agreement somehow spurred the Taliban to take over the nation is a cover story. It’s about as true as the cover story for Benghazi. It’s a lie.

Biden is using Trump’s agreement as his cover story, that the rout of U.S. forces, and the complete bungling of our exit from Afghanistan, criminally leaving thousands of American legal residents and citizens to suffer at the bloody hands of the Taliban—equipped with American weapons—is not Biden’s doing.

It doesn’t matter how many speeches President Biden gives. They will never ring true, because Biden is promulgating lies. The same kinds of lies we heard about Benghazi in 2012 are now back in the White House. Maybe this time, we will learn not to listen.