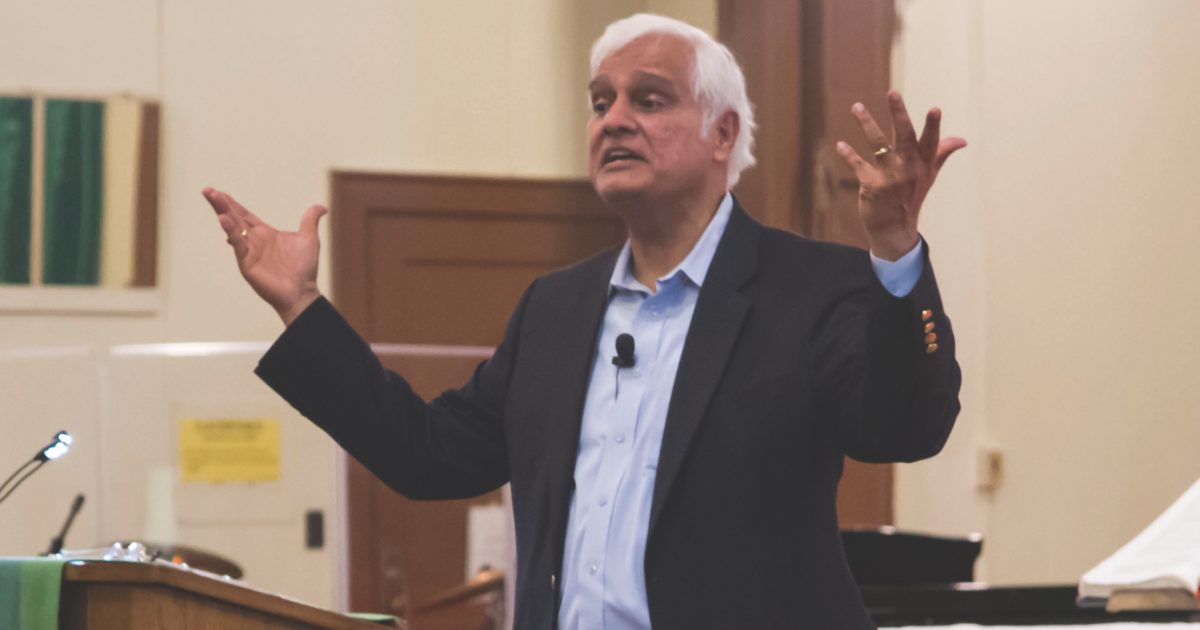 The “both/and” does seem to emerge when a big-name preacher falls, doesn’t it?

I’ve heard many sermons by Ravi Zacharias and seen him in person on several occasions. He was fond of telling a story about a rather long lunch with a philosophy professor who insisted that Eastern logic of “both/and” was superior to Western logic of “either/or.” After allowing the professor to fill napkins with logical assertions and formulae, while the man’s lunch grew cold and congealed in front of him, Ravi posed a question.

“Are you telling me,” Zacharias asked, “that when I am studying Hinduism I either use both/and system of logic or nothing else?”

The professor paused, his shoulders slumping, and quietly replied, “The either/or does seem to emerge, doesn’t it?”

Ravi’s double life, which has just now come into sharp focus, as the ministry which bears his name released the final report on his sexual misconduct, seems to indicate that the man himself went for the “both/and” with quite a lot of gusto.

The report is quite specific, and leads to questions like “why didn’t this come to light years ago?” Well, of course, it did, but because Zacharias was such a famous personality, with iron control of his ministry (despite the appearance of accountability), any hint of allegations or questions were buried.

The board of RZIM (their headquarters is literally minutes from my home), deeply saddened, repented of its sin of protecting the man they regarded as a spiritual father.

We confess that there has been pride and arrogance in our hearts, and we are committed to the ongoing process of repentance. Both for what Ravi did and for all of the ways that we have fallen short, we are so sorry. As an organization, we understand that we have no right to forgiveness and that even if forgiveness is possible, it may take time. We also recognize that earning trust is a process and is dependent on the steps that we take moving forward.

What of RZIM now? I’ll come back to that, because it stands as a red-letter warning to all big-name preachers. The devil is as a roaring lion, seeking whom he may devour, as 1 Peter 5:8 declares. The enemy attacks well-trodden paths of pride and fame, and uses the well-worn weapons of temptation and self-justification. Zacharias fell to it.

At some point, Ravi decided that he could both live as a god-fearing, dedicated and rather famous apologist, openly sharing the Gospel in many places where others were not welcome; and also a sexual predator, carefully planning his trysts, using “religious language” and ultimately, his ministry’s resources to cover up his activities.

Worse, Ravi continued to lie about it.

In 2017, allegations of impropriety surfaced, and Ravi forcefully pushed back. He sent a long defense to Christianity Today, which took a very balanced approach in its reporting, yet published Zacharias’ words in full. Here’s one portion:

In my 45 years of marriage to Margie, I have never engaged in any inappropriate behavior of any kind. I love my wife with all my heart and have been absolutely faithful to her these more than 16,000 days of marriage, and have exercised extreme caution in my daily life and travels, as everyone who knows me is aware. I have long made it my practice not to be alone with a woman other than Margie and our daughters—not in a car, a restaurant, or anywhere else. Upon reflection, I now realize that the physical safeguards I have long practiced to protect my integrity should have extended to include digital communications safeguards. I believe—and indeed would counsel others—that the standards of personal conduct are necessarily higher for Christian leaders.

This was a lie. Ravi knew it was a lie when he wrote it. He lied to his family, probably to his wife (there’s no indication in the report whether she knew or suspected anything), to his ministry, to his Christian followers, and to the world at large, even those who heard him speak the Gospel of life.

I don’t know if Ravi is in heaven now, because I am not God. I don’t say that to be flip, as one’s personal salvation is the most important “either/or” that exists in the universe for an individual soul. The Bible says in Revelation 21:8 “But the cowardly, unbelieving, abominable, murderers, sexually immoral, sorcerers, idolaters, and all liars shall have their part in the lake which burns with fire and brimstone, which is the second death.” To his last days, Ravi remained publicly unrepentant as a sexually immoral liar. Only the Lord knows his heart, and only God’s mercy can offer us surety.

Many critics have and will now claim that Ravi’s work for God is just as much a fraud as his claims of marital fidelity and holy living. They have a right to claim it, but that doesn’t make it true.

Let’s talk about RZIM now. The ministry has become an international source of Christian apologetics, preparing many for the mission field. One of my personal friends is a missionary who obtained his Ph.D. through an RZIM program. Is that friend’s education and spiritual fire now quenched and worthless because the man who founded the ministry fell to grievous sin?

The Bible offers some insight here. King Solomon built God’s temple in Jerusalem. As a young man, Solomon was asked by God what he desired most, and he replied that he wanted wisdom. The Lord granted it, and Solomon became the wisest man to ever live, and the richest king on the earth. Over the known world, leaders admired and sought him. 1 Kings 10 recounts the Queen of Sheba’s visit.

And when the queen of Sheba had seen all the wisdom of Solomon, the house that he had built, the food on his table, the seating of his servants, the service of his waiters and their apparel, his cupbearers, and his entryway by which he went up to the house of the Lord, there was no more spirit in her. Then she said to the king: “It was a true report which I heard in my own land about your words and your wisdom. However I did not believe the words until I came and saw with my own eyes; and indeed the half was not told me. Your wisdom and prosperity exceed the fame of which I heard. (1 Kings 10:4-7)

In the very next chapter, Solomon’s fall is recorded.

For it was so, when Solomon was old, that his wives turned his heart after other gods; and his heart was not loyal to the Lord his God, as was the heart of his father David. For Solomon went after Ashtoreth the goddess of the Sidonians, and after Milcom the abomination of the Ammonites.Solomon did evil in the sight of the Lord, and did not fully follow the Lord, as did his father David.Then Solomon built a high place for Chemosh the abomination of Moab, on the hill that is east of Jerusalem, and for Molech the abomination of the people of Ammon.And he did likewise for all his foreign wives, who burned incense and sacrificed to their gods. (1 Kings 11:4-8)

God became angry, and told Solomon that because of his sin, “I will surely tear the kingdom away from you and give it to your servant. Nevertheless, I will not do it in your days, for the sake of your father David.” (1 Kings 11:11-12.)

Ravi lied to protect his reputation. One of his victims told investigators: “She said he warned her not ever to speak out against him or she would be responsible for the ‘millions of souls’ whose salvation would be lost if his reputation was damaged.” Note he put the blame on her for ruining his reputation—the sign of an unrepentant heart. It was Ravi, of course, who ruined his own reputation, but the Lord did not reveal his sin during his life.

God allowed Ravi to build RZIM, and to use it to glorify God in academia, government, and popular culture. In the process, Ravi was given fame and the trappings of celebrity. He lived with constant back pain, despite many prayers for healing. I won’t comment on the fact that perhaps his prayers of faith were not honored because he offered them from lying lips. James 5:16 may offer an answer, however: “Confess your trespasses to one another, and pray for one another, that you may be healed. The effective, fervent prayer of a righteous man avails much.” Fervency without confession and righteousness avail little.

Any minister of the Gospel whose name is lifted high—let me name names—Joel Osteen, John MacArthur, Tim Keller, Kenneth Copeland, Jesse DuPlantis, Franklin Graham, T.D. Jakes, Beth Moore, Joyce Meyer, Paula White, Andy Stanley, John Kilpatrick, and a host of others I’m sure I am forgetting, be warned. You cannot live a double life. God will not be mocked.

Don’t misunderstand me here. I am not saying these people are living a secret life of sexual predation or any other grievous sin. But they, more than anyone, need to heed the posthumous sermon of Ravi Zacharias. No human is above temptation, or beyond self-justification of their reputation over the humbling power of the Gospel. If a preacher’s ministry must be protected at the cost of their own soul, then the ministry isn’t worth protecting.

Finally, if anyone reading this is on staff at any ministry of note, or even at the local church, where the pastor is respected and trusted, don’t let your obedience to that authority stop you from vigorously and boldly holding your leader accountable for anything you know or strongly suspect. That doesn’t mean running to the press to make unfounded allegations. It means pursuing biblical accountability. James 5:19-20 gives us all authority.

Brethren, if anyone among you wanders from the truth, and someone turns him back, let him know that he who turns a sinner from the error of his way will save a soul from death and cover a multitude of sins.

If only RZIM’s board and staff were more attuned to this scripture, perhaps Ravi could have gone to his reward with more moral surety of receiving it.

Don’t let the lesson and warning of Ravi Zacharias go unheeded. Don’t let another age of hidden abuse, powerful preachers covering up their own double lives, and saddened followers happen.

Like Solomon’s temple, RZIM should endure as a God-honoring and Christ-glorifying ministry, though perhaps under a different name. It has taken a terrible hit from the pit of hell, due to poor choices and and pride by its founder and a board enamored with his fame. Better to live through shame and confession, and to gain your soul and the power of the Holy Spirit, or to joyfully toil in anonymous labor for the Gospel in a faraway land (or in your own neighborhood), than to build something on your own name, and sully it with lies.

For those who have been helped by Ravi’s sermons and his ministry over the years: the truth Ravi spoke is real. God’s love is real. There is no “both/and” in the claims of Christ. In the end, Ravi’s own death and revelation of sin prove that indeed, the “either/or” does emerge. Let that be his lasting legacy.