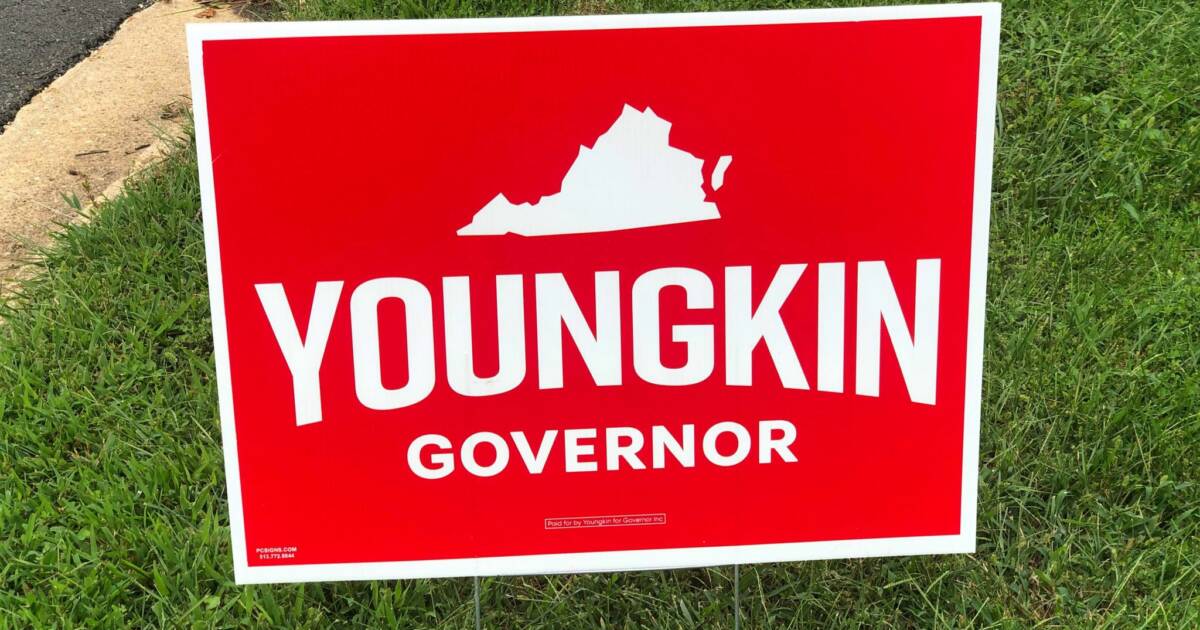 The polls seemed to be pretty accurate in the Virginia gubernatorial race. I’m writing this on Tuesday night as I scan some election returns while watching the Braves and the Astros in the World Series. I wrote earlier this week that the state was too close to call and that the outcome was a coin flip. At this point, that statement seems pretty accurate.

The counting is not yet complete, but it looks as though Republicans will take the lieutenant governor and attorney general races and take control of the House of Delegates as well. Official state election results can be found here. (At 11:00 am on Wednesday, Youngkin holds a lead of about two points, which is very close to pre-election polling, but absentee ballots will be accepted until Friday.)

There will be a lot of post-mortems but there are a couple of important takeaways. First, Republicans should realize that they can win in purple states without Trump. And since they’re going to win the red states anyway, isn’t winning the purple states what it’s really all about? The purple states are what you need to win the whole enchilada and not have to make up excuses about stolen elections.

In fact, it may well be that they can only win purple states without Trump at this point. As I pointed out for several years prior to the 2020 election, Trump’s negatives were so high that re-election would take a miracle. Now, with Trump out of the limelight and off social media, Trump may seem comparatively more popular, but this would likely change once he started campaigning and reminding people of why they didn’t vote for him last time.

Back to current events though. This year in Virginia, Glenn Youngkin kept Trump at arm’s length. When the former president made a late appearance at a “tele rally” shortly before the election, the gubernatorial candidate wasn’t even a part of the event. It was Democrats, rather than Republicans, who kept invoking Trump’s name.

Another lesson is that Republicans seem to have found an issue that resonates with both independents and their base in education and critical race theory. This is true even though most people, like the guy interviewed below, can’t even explain what critical race theory is. They just know they don’t like it.

There was more going on in Virginia than just talking about CRT however. It’s an open question as to whether the education issue will work in other areas that haven’t had a scandal involving a transexual high school rapist or that have different demographics. Would different facts on the ground have yielded a different result? We’ll probably find out next year.

For the Democrats, the lessons are a little tougher to put into practice than the Republican strategy of keeping Trump under wraps, which is no mean feat in itself. The early exit polls show that the economy and education were the two big issues (33 and 24 percent respectively), followed by taxes and the pandemic in a statistical tie (15 and 14 percent). Ending the pandemic and getting the economy – and the supply chains – moving again will help Democrats next year.

The pandemic is winding down. Sixty-seven percent of the US population now has at least one shot and 59 percent are fully vaccinated. The mandates are working and they are mostly popular (including in a Washington Post exit poll from Virginia). The CDC is now recommending the pediatric COVID vaccine for children aged 5 to 11. Barring another surge from a vaccine-dodging variant, the pandemic probably won’t be much of an issue next year, at least in pro-vaccine states. Merck’s new COVID pill could even help to make up for vaccine resisters in other states.

As the pandemic fades, a lot of the economic woes will fade as well. The supply line problems that are a result of the pandemic disruptions should be returning to normal. Ports will be unclogged, ships will be unloaded, and trucks will be rolling.

The big economic question will be whether inflation lingers until election season. Treasury Secretary Janet Yellen expects inflation to ease in the second half of 2022, possibly just in time for the election, but has also said that the reciprocal removal of the tariffs instituted by Donald Trump and maintained by Joe Biden could help to ease inflation earlier. After all, tariffs are taxes that make products more expensive. Personally, I expect inflation to ease as supply problems go away since a lot of the price increases can be traced to shortages.

Ending a pandemic and getting the economy moving again are tall orders, but now, on top of all that, Democrats have to counter the Republican charges about racist school curriculums and sexual deviants in the bathrooms. And they have to do it better than Terry McAuliffe did with his “I don’t think parents should be telling schools what they should teach” soundbite. The early exit poll shows that this issue was one of the most damaging to McAuliffe and Democrats need to find an answer that does not sound elitist or statist.

Terry McAuliffe fared worse than his fellow Democrats in statewide races, but the blame cannot be pinned squarely on his gaffes and lackluster campaigning. With losses up and down the ballot as well as a shift toward Republicans in other states, not all of the blame can be pinned on the guy at the top of the ticket. Part of the explanation may be that Democrats took some of their constituencies for granted, as Brent Scher of the Washington Free Beacon noted below.

I wouldn’t say that Virginia is a red state now, but it did take a step back from being blue. In the end, Virginia Democrats made the same mistake that both parties tend to make. They got greedy and overreached while taking their voters for granted.

There is also a possibility that the Virginia results reflect a reversion to the mean. Democrats fared extraordinarily well in suburban districts during the Trump years. Now that Trump is off the ballot and out of sight, some of those districts that normally lean Republican are falling back into the GOP orbit. Likewise, the big margins that Biden saw in deep blue districts are returning to a normal level.

The tendency from many Democratic partisans will be to take the wrong lesson and say that the party must go further left to save itself. They’ll blame Joe Manchin and Kirsten Sinema for this week’s losses when the holdouts are actually the key to avoiding disaster. Democrats need to pivot to the middle. That’s why Joe Biden was nominated.

As another Twitter user pointed out, the most reliable voters are white suburbanites. Pick your candidates and policy with not scaring them in mind. I’d add to that the fact that black moderates are some of the most reliable Democratic voters. They need to be careful not to alienate this demographic or take them for granted.

One final note is that off-year elections have a very different electorate from presidential elections or even mid-term elections. A big part of the Republican success was an engaged base that turned out while Democrats did not. Even then, the victory was still a close thing. The GOP may not keep that edge over the next cycle of elections.

Even though the Democrats have a list of obstacles to overcome, the Republicans could throw it all away by renominating one of the most unpopular presidents in American history. Running Donald Trump a third time would almost certainly allow the party to once again snatch defeat from the jaws of victory. It’s tough to keep Trump out of the public eye when he’s at the top of the ticket.

In an election night surprise, the New Jersey gubernatorial race turned out to be a close one. Polling mostly showed Democrat Gov. Phil Murphy with a comfortable lead over Republican challenger Jack Ciattarelli. The race has not yet been called (as of noon on Wednesday) and the candidates are deadlocked with the most recent counts giving Murphy a slight edge.

I expect Murphy to eventually come out on top as absentee ballots are counted, but it may be be several days before a winner is declared. Nevertheless, a close race in New Jersey may bode even worse for Democrats than the loss in Virginia.