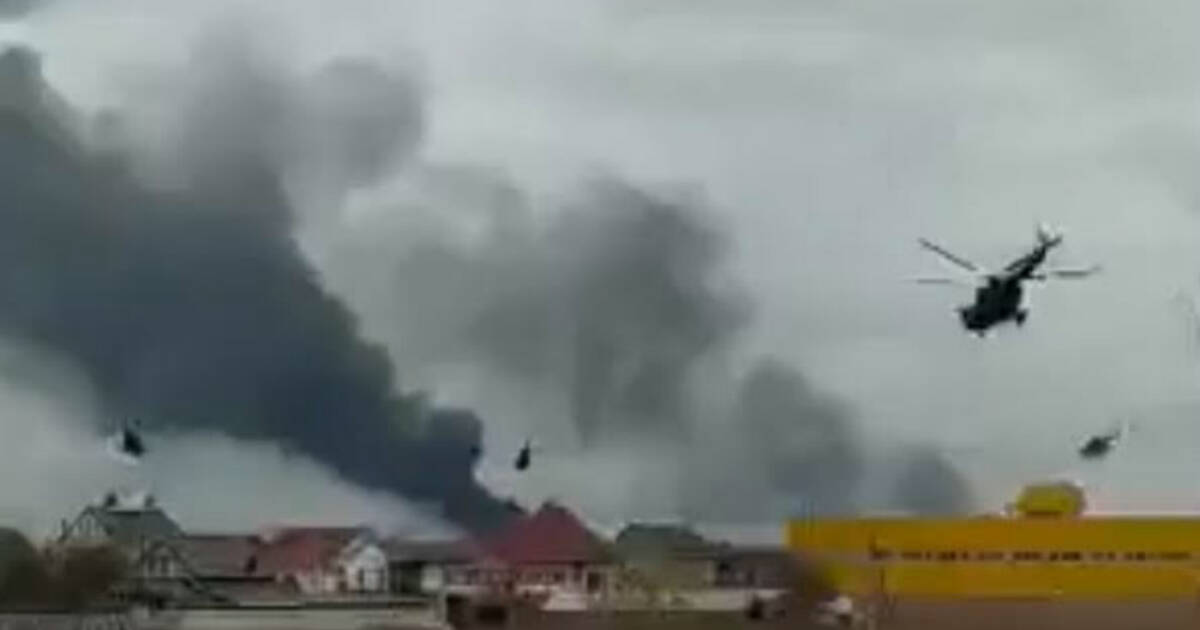 One of the things that Russia apparently has not thought about this week is using its prowess at cyber warfare to shut off the Ukrainian internet. Whether the omission was intentional or not, the videos and pictures streaming out from the combat zones provide a window into a modern conventional war that is hopefully something that will be rarely glimpsed. As someone observed on Thursday, “Now I know what it would have been like if social media had existed on September 1, 1939.”

The vivid images of the Russian onslaught that are emerging often look like something out of a war movie. Some would have to be seen to be believed. In sum, they provide an indelible record of Vladimir Putin’s crimes against Ukraine and humanity. Here then, are some of the most memorable of the videos tweeted from Ukraine on the first days of the war.

In this video, a Russian armored vehicle runs over a civilian Ukrainian automobile. Unbelievably, a subsequent shows that the driver of the car, a senior citizen, survived.

In the next tweet, video shows heavy fighting in the northeastern Ukraine city of Sumy as the town burns. The video is evidence of the fierce resistance being given by the Ukrainian defenders. Russian armor reportedly attacked the town in the early morning hours of Thursday, February 24. Although the Russians captured the city, there are reports that Ukrainian forces recaptured it early Friday morning.

Next, Russian Mi-8 helicopters transporting airborne troops are engaged by heat-seeking SAMs and small arms fire. The Mi-8, codenamed “Hip” by NATO, discharge flares and appear to continue unharmed. Note that the helicopters are flying below the level of the Ukrainian defense position on the mountain.

In another helicopter video, smoke billows as Mi-8s attack the Hostomel airport near Kyiv. The Hips are transports but can be armed with guns and rockets.

Not all of the helicopters got away unscathed. The next video shows a Russian Ka-52 “Alligator” attack helicopter. The Ka-52 is the Russian equivalent to the AH-64 Apache. This one is heavily damaged. There is no word on what happened to the crew.

In the next video, a Ukrainian woman confronts armed Russian soldiers on the streets of Henichesk, a port city in southern Ukraine. A translation of the woman’s words shows that the woman railed at the invaders, calling them “fascists” and telling them to put sunflower seeds in their pockets so that when they die, sunflowers, the Ukrainian national flower, will bloom where they are buried.

“You will lie down here with the seeds,” the woman angrily says. “You came to my land. Do you understand? You are occupiers. You are enemies.”

By now, the whole world knows the story of the defenders of Snake Island. In an act of courage that rivals the defenders of Bastogne and the Alamo, the 13 Ukrainians told a Russian warship to perform an anatomically impossible act when it demanded their surrender. They were all killed in the subsequent fighting. Below is the audio of the exchange.

One of the Ukrainian soldiers on Snake Island recorded this selfie video as the battle began.

In a chilling video, a woman recorded a Russian fighter-bomber as it made an attack run and launched an air-to-ground missile at a target near her house. The aircraft appears to be an Su-27 “Flanker.” A baby cries as the woman runs for cover.

Ukrainian President Volodymyr Zelenskyy was first introduced to most Americans as the man who begged The Former Guy for more Javelin missiles in The Perfect Transcript at the center of the Ukraine scandal that led to Trump’s first impeachment. We saw him again today taking up arms in Kyiv to fight the invaders and telling the world that this might be the last time we see him alive.

Believe it or not, this guy used to be a comedian. Today, he has become a leader in the mold of George Washington.

Morale is not so great on the Russian side. There are reports of Russian soldiers surrendering, including an entire brigade, and telling their Ukrainian captors that they didn’t even know they were going to war.

A look at compelling videos of the day would not be complete without showing Russian anti-war protests. The day began with pictures of individuals with signs. These people were quickly arrested and removed. Several pictures showed protesters being led away by Russian police. But later in the day, thousands of people poured into the streets to register their opposition to Putin’s (something Donald Trump has yet to do by the way). Showing up to protest Putin in Russia takes no less courage than picking up a rifle in Ukraine.

The pictures and videos coming out of Ukraine are a testament to the courage of the Ukrainian people and their determination to remain free.

If the brave Ukrainians are to prevail, however, they will need help from the outside. A successful conclusion to the war will require the Western nations to pressure Putin from the outside both economically and militarily. It will also require peace-loving Russians to rise up and oppose this immoral war and their criminal leader.

But all that is the easy part. Most of all, it is going to require the Ukrainians to stay strong and stand alone.