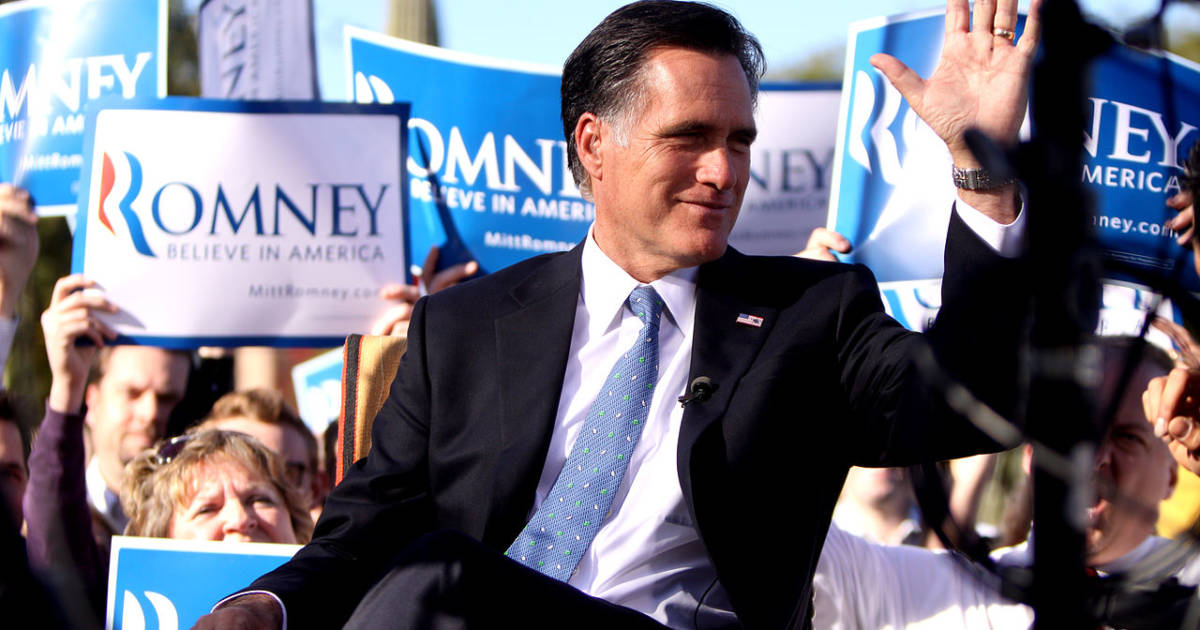 Mitt Romney (R-Utah) and Liz Cheney (R-Wy.) were back in the news over the weekend as Utah Republicans attempted to censure the former standard-bearer of the party and House Republican leaders were rumored to be considering a move to oust Cheney from her leadership role. The pair have become pariahs within the party despite their stature and pedigrees as longtime Republican stalwarts. How is it that Romney in particular could go from presidential nominee to outcast in less than eight short years?

I once had the privilege of briefly meeting Mitt Romney. During the 2012 primary campaign, the now-defunct corporate jet company that I flew for was contracted to provide charter flights for the Romney campaign. On one occasion, I was tasked to fly Anne Romney and her personal assistant. Although we weren’t flying Mitt, he did take the time to stick his head in and tell me and the other pilot “hello.” That was a small gesture, but if you’ve been around the rich and famous behind the scenes, you will recognize it as a rare one.

I remember that even during the 2012 campaign, a lot of conservatives were less than enthusiastic in their support for Romney, who seems to be a genuinely nice guy and an established Republican and conservative. A great many termed him a “RINO,” which is ironic since most of the people who lodged that charge are now firmly in the camp of Donald Trump, even after the failed insurrection.

Interestingly, a great many of the charges against Romney have parallels against Donald Trump. For example, even though Romney opposed the Affordable Care Act, as governor of Massachusetts he pioneered a state health insurance mandate. Nevertheless, he opposed single-payer plans like the Australian model which was touted by Donald Trump.

Romney’s position on abortion was another frequent complaint. As a Republican in a deep-blue state, Romney had to be accommodating on abortion. On The Issues tracks his evolution from an avowed pro-choice politician as late as 2005 to a proud pro-lifer by 2007, just prior to his first presidential run. Donald Trump underwent a similar, miraculous transformation from pro-choice to pro-life just in time to campaign as a Republican. A cynic would say that neither has a strong opinion on the issue, but that both take the stance that is most advantageous at the time.

There are a few areas where Romney and Trump diverge, however. One notable difference is immigration. Mitt Romney was (and is) unabashedly pro-immigration while it is increasingly obvious that Donald Trump and many of his supporters not only oppose illegal immigration but legal immigration as well. Even before Trump took control of the party, the GOP seemed to be establishing opposition to immigration reform, “amnesty” as the talking heads term any plan short of summary deportation for all illegals, as a new litmus test for candidates.

Another big difference deals with religion. Mitt Romney is Mormon and Mormonism is widely considered to be a cult by mainstream Christians. Mormon theology has many key differences from traditional Christian theology. Nevertheless, four years later, when Donald Trump became the nominee, the view of Christian Republicans was that “we are not nominating a national pastor.”

And not a pastor was what they got. Donald Trump showed ignorance of the Bible, said that he never asked for forgiveness, mocked the faith and prayers of others, and used the Bible as a prop. Trump may be a heathen, but he isn’t a Mormon. (Full disclosure: I have known a number of Mormons and even though I disagree with their spiritual beliefs I have found them to uniformly be good people.)

Finally, I noted earlier that Mitt Romey seems to be a genuinely nice guy. In fact, a lot of Republicans think that Romney lost because he was too nice. For example, many felt that Romney didn’t respond strongly enough to Barack Obama’s attacks. Donald Trump may be a jerk, the reasoning goes, but he’s a fighter.

And, the biggest difference between the two is that Trump won. At least, he did in 2016, although in the minds of some of his supporters he won in 2020 as well.

Never mind that Mitt Romney won a larger share of the popular vote in losing than Donald Trump did in winning. Never mind that Trump faced a much weaker candidate in Hillary Clinton (who he barely beat and then due to an Electoral College fluke) than Mitt Romney did in Barack Obama. The end result is all that counts.

Mitt Romney had a number of problems with Republicans, but the irony is that Donald Trump had many of the same problems. Romney’s unforgivable sin was losing. That original sin was compounded by a second unforgivable transgression when he voted to remove Donald Trump from office. Twice.

And that’s where we circle back to Liz Cheney, who also voted to impeach Trump. Cheney has strong conservative credentials, but her impeachment vote was also an unforgivable sin. The Republican Party has another new litmus test in addition to the immigration hard line: Thou shalt not speak ill of Donald Trump.

The accusation that Mitt Romney and Liz Cheney are RINOs doesn’t fit with their political platforms or ideologies. Although Romney differs (and has differed in the past) from some Republicans on some issues, if he is a RINO for those differences, then so is Donald Trump. On some issues, conservatives of good conscience can disagree and still be conservative.

The party that nominated Mitt Romney in 2012 no longer exists.