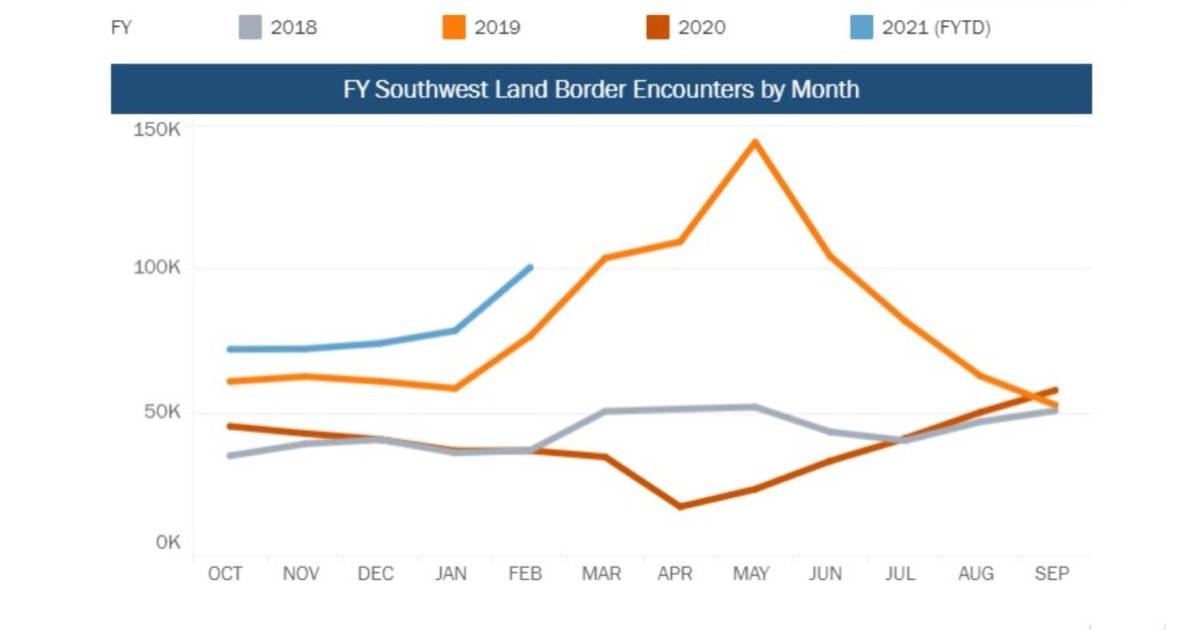 The problem of illegal immigration goes back decades and has plagued both Democratic and Republican administrations. Despite Donald Trump’s hardline immigration policies, he did not resolve the issue.

If we look at CBP statistics on “encounters” on the southern border in the screenshot above (or an interactive version on the CBP website), it’s easy to see a huge dropoff in May 2019 (follow the orange line). What is less noticeable is that law enforcement encounters started rising again in April 2020 (red line) and have continued steadily increasing since then. It’s also true that there was a sharp uptick in January 2020, the last month shown on the chart (blue line). A separate statement by the CBP said that the numbers continued to increase in February 2021, which was a 28 percent month-to-month increase over January.

So multiple things are true. Illegal border crossings declined under Trump, but then they started to increase again. It is also true that the already-rising tide picked up further as Joe Biden’s inauguration approached and has continued to do so since.

We can speculate as to the causes of the increased number of border crossings but two obvious reasons come to mind. First is that the pandemic depressed the Latin American economy as well as that of the US and made it attractive enough to come to the US that migrants would risk harsh treatment by the Trump Administration. Second, there probably was a hope that President Biden would be softer on immigration than President Trump. So far, that does not seem to be very true.

At the core of the current problem is an influx of unaccompanied minors, children traveling without adults, from Central America. The BBC reported that CBP held about 4,200 children as of March 14. That number had increased by 1,000 children over the previous week, an increase of about a third. Just under 10,000 children were detained in February, which was about 10 percent of the total number of illegal immigrants encountered.

Federal law stipulates that the CBP can only hold children for three days before turning them over to health officials in the Office of Refugee Resettlement (ORR). However, the large numbers of children being detained have resulted in a backlog that has dramatically increased wait times. The backlog has been made worse by the winter storm in Texas and pandemic restrictions.

As to claims that Biden is putting “kids in cages,” another fundamental truth of the border situation is that when children are caught crossing the border, they have to be detained somewhere. It would be inhumane to leave them wandering around in the desert. The large numbers of children have overwhelmed facilities designated to hold them.

Comparisons to Trump’s policies on immigrant children fall short on several important points but one is I ntent. The Trump Administration had an intentional policy of separating children from their parents as a deterrent. As far back as May 2018, then-Attorney General Jeff Sessions warned that border-crossers with children would be separated from them. On the other hand, the Biden Administration is dealing with children who have made the journey alone.

Nevertheless, the large number of children has caused a problem in finding locations to house them, but temporary housing facilities do not equal “kids in cages,” as photos of Obama Administration facilities were called and applied to Trump policy.

In February, the Biden Administration opened the first new facility to house immigrant children in Carrizo Springs, Texas. Photos of the facility, which was originally built by the Trump Administration and renovated this year, show classrooms with socially distant seating and bunkbeds in Quonset hut-style dormitories but no cages. The Biden Administration has also mobilized FEMA to help house the children.

And speaking of social distancing, the CDC has approved increasing the facilities to full capacity to meet demand, even as it admits that the lack of social distancing will lead to more COVID-19 cases. The influx of children and lack of available space drive the decision despite the risk. Even though children are less susceptible to the virus, there is still the possibility that they could drive some additional spread as they are moved from facility to facility.

So what happens to migrant children when they are detained by CBP? CBS News has a detailed report on the process that the children will navigate, but essentially law enforcement is allowed to hold them for up to 72 hours when they are first detained, after which they are treated as refugees. The Office of Refugee Resettlement, part of the Department of Health and Human Services, then houses the children until they can be placed with vetted sponsors, which are often family members already in the US.

The Flores Settlement Agreement, a federal court settlement from 1997, requires that immigration authorities “release children from immigration detention without unnecessary delay in order of preference beginning with parents and including other adult relatives as well as licensed programs willing to accept custody.” The agreement was intended to be temporary but Congress and three succeeding presidential administrations have failed to agree to permanent rules on how to handle immigrant children.

It’s easy for hardliners to say “send them back” or “just enforce the law,” but the government’s handling of the children (and immigrants in general) is regulated by law and court decisions. In the case of the children, US law allows them to seek asylum, just as it does adults. Children who were victims of trafficking can also apply for visas and those who were abused or abandoned can apply for green cards through Special Immigrant Juvenile Status. Expedited deportation processes do not apply to unaccompanied minors.

A wall isn’t a solution either. Such a structure would be too expensive and ineffective. The fallacy of a wall as the solution to the problem is evident in recent reports from Arizona that show crossings are up even in areas where the Trump Administration beefed up existing border fencing with its proposed wall. Even before Trump left office, the number of December border crossings in 2020 was the highest of any year since 2000.

The best solution to the current problem is to fix our broken immigration laws. We are currently saddled with a hodgepodge of decades-old federal laws, judicial directives, and bureaucratic policy which sometimes conflict with each other. What is needed a comprehensive immigration reform that will find better solutions on how to handle waves of immigrants – because this one is not the first and it won’t be the last – and supersede court orders like the Flores agreement and a 2020 ruling that banned the government from placing migrant children in hotels.

As I’ve pointed out in the past, when immigration hardliners scuttled several attempts at immigration reform over the past two decades, the result was not to force the government to tighten its border policy. Instead, there was the opposite effect as the border remained porous and the broken immigration system was preserved.

Is the current immigration surge due to the belief that President Biden will let illegal immigrants in? Probably at least in part. But it’s also due to right-wing media that trumpets the false claim that Biden allows “open borders” and that has killed attempts to tie increased border security to comprehensive reform packages by denigrating them as “amnesty” bills. (They weren’t, but I digress.)

The best thing for the country would be for both parties to come together on a compromise bill that fixes our broken system and reinforces border security with fencing where it makes sense and high-tech monitoring and manned patrols where it doesn’t. But that won’t happen. It’s easier to yell “Amnesty!” and accuse Biden of putting kids in cages than to compromise in order to get real reform passed.

In the end, I have to wonder if either side really wants to solve the immigration problem. For Republicans, the wall and migrant caravans were great for fundraising and turning out the base. Now, they’ve also got the progressive left angry at Biden for following the law. For Democrats, immigration rhetoric that makes the GOP appear racist is the gift that keeps on giving. Neither side has much incentive to find a solution because, after all, new immigrants, illegal or otherwise, don’t vote.