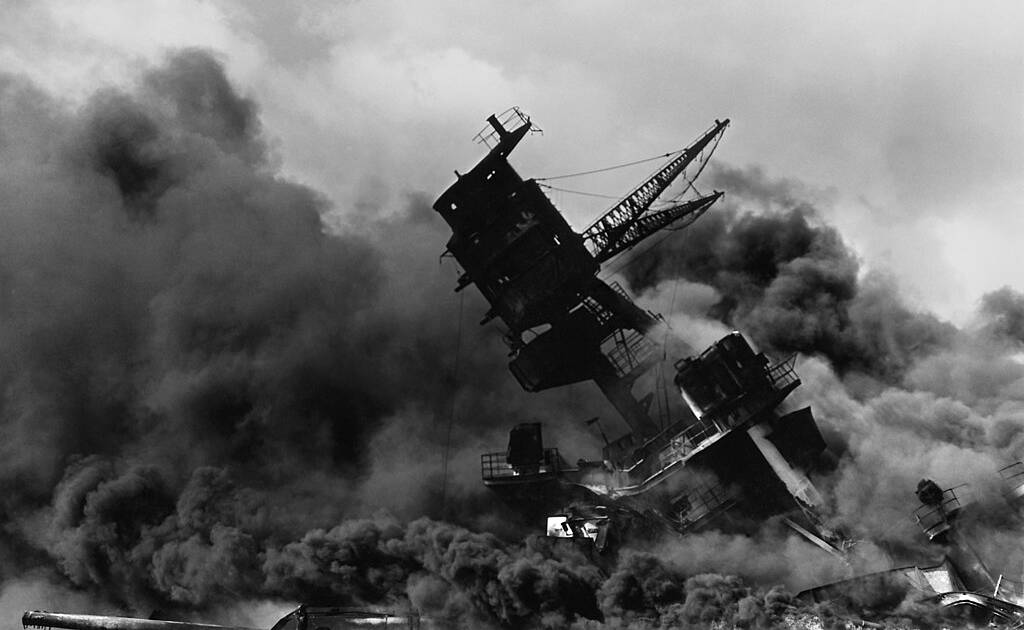 December 7 is a day that most Americans with any knowledge of history will remember. As President Franklin Delano Roosevelt said at the time, it is “a date which will live in infamy.” And it has. The attack on Pearl Harbor by the Japanese is one of the dark moments in American military history.

Pearl Harbor is remembered as a sneak attack, and it was, but what a lot of people don’t realize is that even though the Japanese achieved complete surprise that Sunday morning, the fact that the war was brewing with both Japan and Germany was not a big surprise to most observers at the time. The time and place of the attack were a surprise, but the attack itself was not.

I’ve done a lot of reading during the pandemic and one of the most interesting books that I’ve read (reread actually) was “They Fought With What They Had” by Walter Edmonds. This is a gripping account of the first days of the war that focuses on the US Army Air Corps (the Air Force wasn’t born as a separate service until after World War II) in The Phillippines. The book makes clear that the US knew that war was probably coming and was beefing up its forces in The Phillippines, but by December 8 (the war started on Monday, December 8 on the other side of the International Date Line), we were still woefully unprepared and outgunned.

Japan and the US had been on a collision course for years. The Japanese invaded Manchuria in 1931 and their expansion throughout East Asia threatened US and British territories. In July 1941, President Roosevelt froze all Japanese assets in the United States in retaliation for the invasion of French Indochina (Vietnam) the previous year. By this time, Japanese planning for an attack on Pearl Harbor had already begun. Gordon W. Prange’s classic book, “At Dawn We Slept,” details how preparations for the attack had started in early 1941.

War in Europe was not a surprise either. The war had actually been raging there for more than two years. Germany invaded Poland on September 1, 1939, and controlled most of Europe by the time the US entered the war.

Although not yet an official combatant, the US Navy had been fighting an undeclared war against German U-boats in the Atlantic for more than six months by the time of the Pearl Harbor attack. Beginning in April 1941, FDR authorized Navy vessels to aid in tracking Axis vessels and protecting convoys of aid to the British. In October 1941, an American destroyer was hit by a German torpedo, killing 11 US sailors and wounding 24. There was little doubt that the US and Germany would find themselves fighting a full-scale war at some point in the near future.

We normally focus on the latter stages of World War II so it’s hard to imagine how bleak the winter of 1941-42 must have been. US outposts were falling in the Pacific and U-boats were sinking ships within sight of America’s Atlantic coast.

But only a few months later, America went on the offensive. After a surprise victory at Midway in June 1942, the US started taking territory away from the Japanese with landings on Guadalcanal in July 1942. By November 1942, we were also taking the war to the Germans with Operation Torch, the invasion of German-held North Africa.

As Mark Twain said, “History may not repeat itself, but it rhymes.” That’s the case today where the geopolitical situation looks very similar to that of 1941. The role of the aggressors have been recast, however.

In Europe, the Russians are massing forces on the border of Ukraine. Much as Hitler wanted to recapture territory lost in World War I and find expanded room for Germany, Vladimir Putin seems intent on rebuilding the Russian empire. This could include not only Ukraine but nations such as Latvia, Estonia, and Lithuania. Putin would undoubtedly like to expand his sphere of influence to Eastern European counties such as Poland and the Czech Republic.

Historically, Russia has relied on a deep defense strategy. To ward off invasion, they depend on vast distances that are increased even further by adding layers of vassal states outside their borders. Ukraine was once part of this system, but the nation’s application to join NATO is seen as a threat by the Russians.

In the Pacific, the role of the aggressor in the possible sequel to World War II is being filled by China. The Red Chinese have been playing the long game in their desire to reclaim Taiwan and relations with the US are still tense after the Trump years.

While China is so far not massing its forces near the Taiwan Strait, it has been apparent for a long time that they view us as an adversary and that we stand in the way of Chinese dominance of Asia. Aside from Taiwan, tensions in the Pacific are largely related to economic growth and the need for resources and markets to keep the factories running. This is similar to the situation with Japan before Pearl Harbor.

I’m not predicting a war with Russia and/or China, but it is certainly a possibility that we have to consider. The world looks eerily similar to the 1930s and 1940. We can’t afford to let our guard down and get distracted by internal politics. In a modern war that could go nuclear, we may not have the luxury of mobilizing six months after the shooting starts.

That’s a good reason to carefully consider your choices in the upcoming primaries and general elections. Beyond party affiliation, we need to steer clear of isolationists who would give our potential adversaries the idea that we won’t honor treaty commitments or would stand aside while authoritarians annex neighboring countries. I, for one, don’t want war but believe that the best way to avoid it is by projecting strength and the willingness to fight if necessary.

I’ll close with an explanation of the title of my piece today. Some of you probably recognize it as a prelude to Irving Berlin’s “God Bless America.” First written in 1918, the song was revised in 1938 and often performed with an opening that is not often heard today:

While the storm clouds gather far across the sea

Let us swear allegiance to a land that’s free.

Let us all be grateful for a land so fair,

As we raise our voices in a solemn prayer:

The prayer, of course, is “God bless America.”

Storm clouds are gathering across the seas once again. And once again, it is appropriate to pray for America and to pray for peace, both at home and abroad.