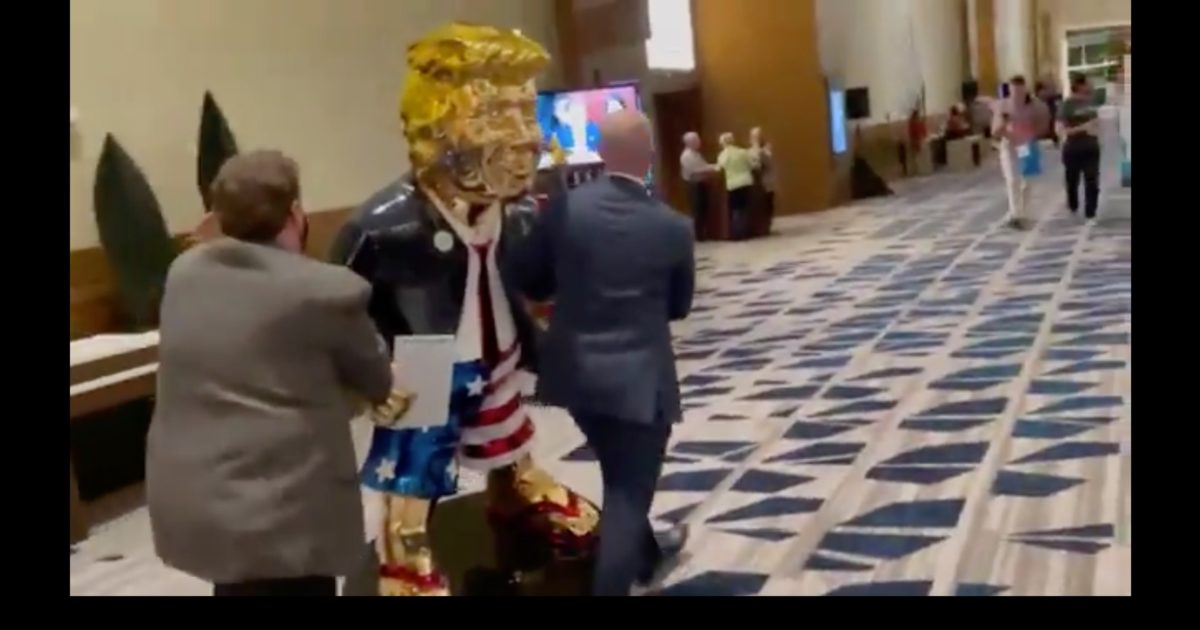 I’ve written many times that if it sounds too stupid to be true, it probably is. However, I’ve also written a somewhat contradictory corollary to that statement, which holds that, quite often in our times, reality is more unbelievable than satire. It was the second statement that was on display this week at CPAC when Republican activists wheeled out a golden statue of Donald Trump.

Given the high percentage of self-proclaimed Christians among the activists at CPAC, you might think that some would see the parallel between a golden, graven image of the former president and the numerous Biblical admonitions against idol worship (as well as idle worship, but I digress), but the crowd seems to have been lacking in such self-awareness.

If you’ve seen these pictures, you may have wondered, as I did, why and how the conservative conference came to play host to a modern-day icon of a political figure for quasi-religious veneration. CNN provides the backstory on the golden Trump:

Tommy Zegan, a California-based artist, created the Trump statue in response to the multiple pieces of art mocking Trump.

“Two years ago, when I saw all those statues of naked Trump and Trump on a toilet, I said, ‘You know what? I can do better,’ ” Zegan told CNN Friday as attendees gathered around the statue to snap photos with it.

Zegan said the piece on display at CPAC is actually the fiberglass mold of the real, stainless steel sculpture currently stored in a warehouse in Tampa where it awaits a potentially high-profile showcase.

“It is museum-quality, and that’s the one I’m eventually hoping to get in the Trump library,” Zegan said. “It is literally priceless.”

The golden Trump, which ironically was made in Mexico, is strongly evocative of any number of Bible stories. There was the golden calf that the Israelites made in Exodus 32, the tendency of the Israelites to set up idols of Baal in the high places, and most ominously, the image of the Antichrist that John predicted in his Revelation would be the focus of compulsory worship in the last days.

The context of the golden Trump at CPAC is that members of a party, which many already believe has become a personality cult, have cast a golden statue of its leader that strongly resembles an idol. On Twitter, Scott Lincicome won the internet for the day by referring to the statue as “DeploraBaal.”

Now, I’m pretty sure that the intent of Zegan, Look Ahead America, the organization at whose booth the statue resided, and CPAC was not to induce people to bow down to a golden effigy of Donald Trump. I’m also positive that no other Republican leader would be the subject of such devotion.

Mitt Romney and John McCain would definitely be averse to being the subject of a golden effigy, being the humble and unassuming men that they are (or were, in the case of McCain). I pretty sure that neither of the Bushes or Reagan would have been comfortable being the subject of such adoration either, even though they accomplished much more than Trump.

I’ll acknowledge that Abraham Lincoln was posthumously awarded the Lincoln Memorial and a spot on Mount Rushmore alongside Teddy Roosevelt, but we also have to admit that Lincoln and Roosevelt had much more success as presidents than Trump. Lincoln preserved the Union and Roosevelt at least won two terms, although in one of history’s ironies he split the GOP after leaving office in 1909 as Trump is splitting the party today. Roosevelt broke with conservative Republicans to form a pro-labor “New Nationalism” movement and ended up handing the House to Democrats for the first time in 20 years and enabling Woodrow Wilson to win the White House in 1913.

Even including Lincoln and Roosevelt, I can’t imagine any other Republican being the subject of a golden statue. I’ll extend that statement to Democrats as well. Even Barack Obama, who gave his 2008 convention speech from a stage that was created to resemble a Greek temple and was the subject of his own devout following, would most likely be uncomfortable with such naked veneration. At least I hope he would.

The golden Trump seems to be unique in American politics. Even though we’ve occasionally embraced politicians as celebrities, the veneration and… well, worship of Donald Trump is something I’ve never seen in this country before. Even leaving aside the golden idol, the prevalence of Trump flags around red states is unprecedented, especially four months after his election loss. Aside from a few Obama flags, I don’t recall ever seeing any politician’s name emblazoned on flags.

Republicans may not think that they are part of a personality cult centered on Donald Trump but parading around golden idols of the former president is going to make it tough to convince the rest of the country. That’s especially true since I haven’t heard a single Republican complain about the unseemly statue. Instead, Republicans like Mitch McConnell and Marco Rubio line up to affirm Trump’s continuing role in the party, despite provoking his base to attack to attack the Capitol in an attempt to overturn the election.

Everything else aside, the purpose of a political party is to persuade people to vote for its candidates. Republicans may be enamored with Donald Trump and amused by the golden statue, but to the rest of the country, it affirms the GOP’s descent into an irrational cult of personality. If the Republican Party wants to have a future, it needs to change its current image as a party that exists to praise a failed and unpopular former president.

Republicans need to junk not only the Trump statue but the Trump idolatry.