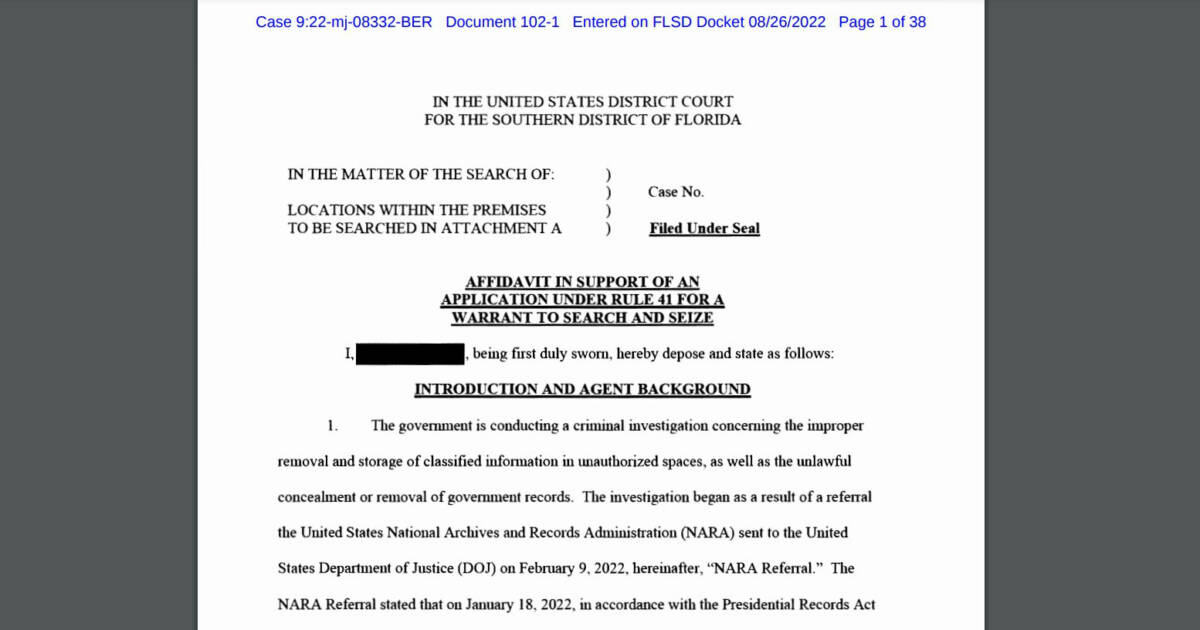 The affidavit attached to the FBI search of Donald Trump’s Mar-a-Lago home has been unsealed and is available online. The heavily redacted document tells the story of why federal agents felt they needed to raid the home of the former president.

Per the filing, the case began with a referral from the National Archives and Records Administration (NARA) after that agency received 15 boxes of documents in January. Some of these boxes contained classified information.

The FBI determined that it was likely that classified National Defense Information was still stored at Mar-a-Lago in addition to other documents that were subject to presidential records retention laws. The filing also says that the FBI believed it likely that evidence of obstruction would also be found.

The filing cites several relevant statutes including, 18 U.S.C. § 793(e), which pertains to defense information, and 32 C.F .R. Parts 2001 and 2003, which deal with classified national security information.

The filing goes on to say that the National Archives referral alleged that “highly classified records were unfoldered, intermixed with other records, and otherwise unproperly [sic] identified.”

The filing goes on to say that Trump was notified by a letter to his counsel that Mar-a-Lago was not authorized as a secure location to store classified documents. In this June 8 letter, the government noted that the documents “have not been handled in an appropriate manner or stored in an appropriate location. Accordingly, we ask that the room at Mar-a-Lago where the documents had been stored be secured and that all of the boxes that were moved from the White House to Mar-a-Lago (along with any other items in that room) be preserved in that room in their current condition until farther notice.”

This wording is not an indication that the government was okay with the status quo of the documents. To me, this sounds more like a warning that nothing should be touched until we get there. Don’t tamper with the evidence.

The filing also includes an attachment from M. Evan Corcoran, a Trump attorney, stating that a “president has absolute authority to declassify documents.” Corcoran also noted, “Beyond that, the primary criminal statute that governs the unauthorized removal and retention of classified documents or material does not apply to the President.”

A big piece to the puzzle might have fallen into place with a new CNN report. Per this reporting, Tom Fitton of Judicial Watch may have played a big role in encouraging Donald Trump to resist NARA requests for the documents at Mar-a-Lago. In a series of phone calls beginning last February, Fitton allegedly encouraged Trump to refuse to give up any additional records after the initial 15 boxes.

“The moment Tom got in the boss’ ear, it was downhill from there,” said an anonymous Trump aide.

The affidavit confirms my initial suspicion that the FBI would not go into a former president’s home without strong probable cause. There seems to have been conclusive evidence that Trump unlawfully possessed classified documents and was storing them haphazardly in boxes with other unclassified materials. It also seems apparent that Trump pretended to be cooperative while obfuscating and hiding other documents.

While it is true that Trump could have declassified these documents while he was president, we have so far seen no evidence that he actually did so. What’s more, declassifying sensitive documents in order to take them home and leave them lying around the house is not exactly an argument that exonerates the former president of being careless with national secrets.

There are still many unanswered questions. Large sections of the affidavit are censored so we don’t know where the FBI got its tips about Trump’s stash. We also don’t know exactly what the raid yielded.

From what we know at this point, however, the raid was not only legal but was well-justified. Based on Trump’s lack of cooperation and dishonesty in dealing with the National Archives and the DOJ leading up to the raid, I would not be surprised to hear news of an indictment in the coming weeks.

That won’t be political persecution of a former president. That will be the fruit of his own bad behavior and disregard for the law.