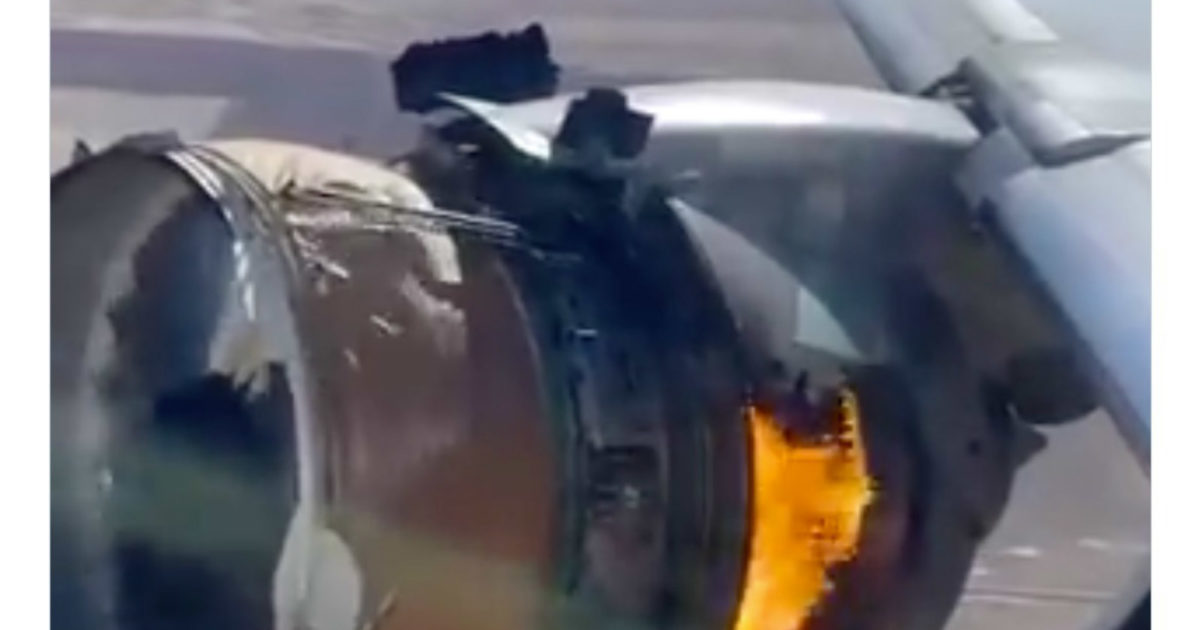 Passengers on United Flight 328 from Denver to Hawaii got a surprise on Saturday when one of the Boeing 777’s engines caught fire and began shedding parts in mid-air. Video of the flaming engine is dramatic and would have doubtless been terrifying to those on board.

Another video, taken from the ground in Broomfield, Colorado, a Denver suburb, shows large pieces of the aircraft falling from the clouds to the ground.

Other pictures show the large, circular engine inlet cowling resting in the yard of a house. It is remarkable that no one on the ground was injured by falling debris.

With newer aircraft like the 777, there is little that a pilot can do to inadvertently destroy an engine. Where older engines, required close attention to several controls, new engines come with Full Authority Digital Electronic Control (FADEC) by redundant computers. The pilots have switches to control the flow of fuel to the engine, the ignition, a throttle, and little else for normal control of the engines. Pilot error seems unlikely in an incident like the one yesterday.

It’s difficult to say what would cause an engine fire like the one on United 328. One possibility is a broken or disconnected fuel line that sprayed fuel onto the engine, which was then ignited by high temperatures. This might have been caused by a faulty part, ingestion of a foreign object, or improper maintenance, but it’s impossible to say for sure what happened or why without an investigation.

What we can say is that the pilots handled the situation well. Procedures for handling an engine fire are similar in most aircraft. The fire would have triggered an alarm in the cockpit and prompted the pilots to follow emergency memory items. These steps would have included reducing the throttle to idle and pressing a fire switch that would close fuel, hydraulic, and engine bleed air (which is used for a variety of tasks such as heating the wings to avoid icing and pressurizing the passenger cabin) valves.

If starving the engine of fuel did not put the fire out, the next step would have been to discharge a bottle of fire-extinguishing agent into the engine. From the video, it looks as though this fire might have required both of the fire bottles that most jets carry.

Although airliners can fly with a failed engine, getting the airplane back on the ground would have been a priority. The fire could have damaged other systems before it was extinguished or could continue to burn undetected so the safest thing to do is return the plane to terra firma.

As I watch the videos of large pieces of metal falling from the sky, I have to wonder whether they were all parts of the engine cowling or whether the plane might have shed some skin from the underside of the wing as well. There are fuel tanks in the wing of the 777, so if the fire came close to entering the wing it would mean that a larger tragedy was narrowly averted.

Often, aircraft fires lead to emergency evacuations. In the case of United 328, I have not seen any indication that the passengers were evacuated. In an additional video of the landing, the fire seems to be out, which would have allowed the passengers to deplane normally. I think that we can forgive the passengers for cheering and applauding after this landing.

The 777 has been in service since 1995 and has experienced remarkably few accidents. At this point, only seven airplanes have been lost and two of these, Malaysia 370 and Malaysia 17, were due to foul play. Of the remaining five hull losses, three involved fires but were not engine fires like the problem United 328 experienced. One plane caught fire while being towed and another while being loaded, an accident which may be the result of lithium-ion batteries in the cargo overheating. The third hull loss to fire was a cockpit fire that also occurred on the ground.

One of the most serious similar incidents was Singapore Airlines Flight 368, which experienced an engine fire in 2016. About 30 minutes after takeoff, the crew noticed high oil pressure and low oil temperature on the right engine as well as strange vibrations. They ultimately elected to return to the airport and the engine caught fire after landing. The cause of this accident was determined to be a fuel leak due to a cracked fuel tube. The fuel ignited after coming into contact with hot engine metals.

All of the passengers and crew of Singapore 368 survived the incident and the aircraft was returned to service. FlightAware shows its last flight less than a year ago on March 25 as the pandemic was heating up.

Interestingly, the Pratt and Whitney 4000 engines used on the 777 have a history of recent problems. In December 2020, a Japan Air Lines 777 suffered an engine failure in which two of the engine’s fan blades broke off. On February 20, 2021, the same day as the United accident, a Longtail Aviation 747 freighter equipped with similar engines had a severe engine failure that rained debris down on a village in the Netherlands. Unlike in Denver, a woman on the ground was injured by falling aircraft parts. Given these similar incidents, NTSB investigators will likely be looking for problems in the design or the maintenance of the Pratt and Whitney engines, a model which has been in service on a variety of aircraft since 1987.

Fires are one of the most serious situations that you can encounter on an airplane, but engine fires are usually easily dealt with by shutting off the supply of fuel. Engine fires and engine-out approaches and landings are practiced frequently in simulators.

Fires in the cabin are far more serious and deadly as well as difficult for the crew to fight. A number of airliners have crashed due to inflight fires within relatively recent history. Cargo airlines are particularly vulnerable to this sort of accident, but passenger carriers are not immune. One of the most famous crashes due to an inflight fire was the 1998 crash of SwissAir 111, which crashed less than 20 minutes after a fire in the plane’s wiring was first detected.

Boeing, fresh from its 737 Max 8 scandal, definitely does not need more bad press. Thankfully, none of the recent incidents involving the Pratt and Whitney engines were fatal, but three uncontained engine failures within three months seem outside the realm of coincidence. If I was an investigator on the United 328 fire, I’d start by looking at new repairs or modifications or recently installed parts on the engine.