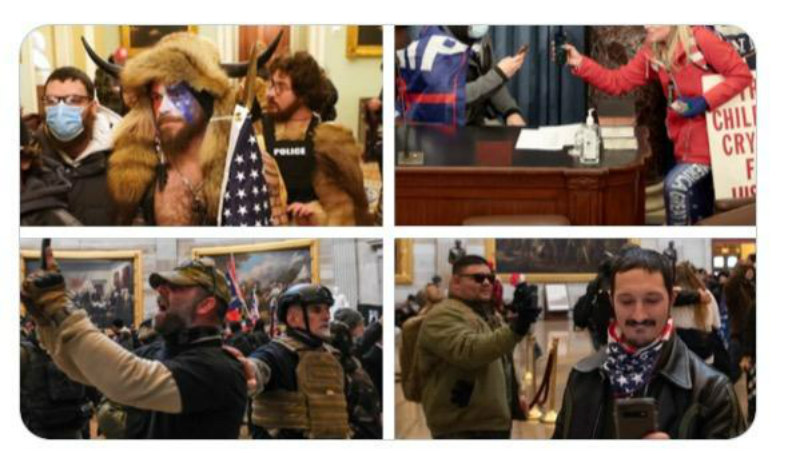 The attack on Congress yesterday marked a low point in American political discourse that has not been seen since the Civil War era. Hordes of partisans overwhelmed police and broke into the Capitol building in an attempt to disrupt the tally of Electoral College votes. Almost immediately, many went online to claim that the real culprits were Antifa and that the Trump supporters in the crowd were peaceful. The evidence shows otherwise.

One of the first of the rioters to be publicly identified was Ashli Babbitt, a 25-year-old Air Force veteran from San Diego. Babbitt was the woman who was shot and killed by police in the Capitol building in the midst of the riot. Babbitt’s husband identified her as an avowed Trump supporter and her social media feed shows that she embraced conspiracy theories such as Pizzagate and QAnon.

Another prominent case involves Trump attorney Lin Wood, who has now been permanently banned from Twitter. Wood tweeted an accusation that the man seen in Capitol pictures with a horned headdress was actually an Antifa member named “Spencer Sunshine.” A Twitter user claiming to be a QAnon supporter named Jake, who had protested BLM and Antifa rallies, responded to Wood’s tweet.

That story checks out. Back in May, Jake Angeli, a man in matching headgear, was interviewed by AZ Central in Phoenix. In the video, Angeli beats on a primitive drum and yells, “Thank you, President Trump! Thank you, Q!”

Angeli has also showed up in costume at other pro-Trump and pro-reopening events at least as far back as February 2020 per AZ Central. Poynter reported that he had created an online crowdfunding campaign in an attempt to raise money to travel to Washington for December’s Million MAGA March.

Another well-known Trump supporter who took part in the insurrection is Tim Gionet. Gionet is an alt-right activist who goes by the name “Baked Alaska.” Gionet allegedly appears in a photo that was reportedly taken inside Speaker Nancy Pelosi’s office as well as another video that was streamed from a Capitol hallway.

Gionet apparently conducted a podcast from inside the Capitol. In yet another video clip that goes with the still photograph, Gionet says, “We are fighting for Trump.”

Alt-right podcasters and QAnon activists are one thing, but a newly-elected West Virginia legislator is quite another. Derrick Evans, a Republican member of the House of Delegates, posted video of himself among a crowd of rioters inside the Capitol. A screengrab from another video shows a helmeted Evans among the crowd.

The video, which has since been deleted from Evans’s social media accounts depicts the lawmaker yelling, “We’re in, baby!” and “Derrick Evans is in the Capitol!”

West Virginia media reports that a bipartisan group of West Virginia legislators is calling for Evans to resign from his new job.

As I was writing this piece, yet another famous face from the riot has been identified. The Bradenton Herald reports that the smiling, waving looter who was photographed carrying off the lecturn from the House of Representatives has been identified as Adam Christian Johnson, 36, of Parrish, Fla. (Cue “Florida Man” hashtag.)

Johnson reportedly has criminal record with possession of marijuana and violation of probation charges. His social media posts reportedly described his trip to Washington to take part in the anti-Electoral College protests.

President Trump also did not believe that the rioters were Antifa. In his video statement to the mob, the president said, “We love you. You’re very special.” A since-deleted tweet was similarly complimentary. It is obvious that the president was talking to his supporters and not Antifa.

Further, conservative journalist Andy Ngo, who has reported extensively on Antifa, told the Washington Examiner, “The people occupying the Capitol building do not look like Antifa people dressed in Trump gear or Trump costumes.”

“I have seen no evidence that they are able to coordinate a mass infiltration on this scale before, so I’m really skeptical that they would have been able to do it here without any of that information leaking out,” he added.

Many people reading this will probably think that the assault on the Capitol is funny, but the truth is that what the MAGA rioters did was even worse than Antifa or Black Lives Matter. The MAGA riots were an attack on the foundation of American democracy.

As we speak, FBI and police are arresting many of those who took part in the incursion, which meets the FBI definition of “terrorism.” Other applicable terms include “coup attempt” and “insurrection“

The rioters risked their lives and freedom for lie upon lie. There was no widespread election fraud. The Trump Administration has been unable to prove its fraud allegations in dozens of lawsuits.

There was also no way to overturn the Electoral College. The Constitution does not give the vice president the power to throw out Electoral College votes and congressional Republicans never had the votes to sustain their objections.

The attack backfired. There were fewer Republicans willing to go on record opposing the will of the voters after the attack than before because most of them know that the fraud claims are lies. President Trump also lost the goodwill of a great many hesitant supporters.

You may have been taken in by the first two lies but don’t believe the third one. It was not Antifa that violated the Capitol building and congressional proceedings. The culprits were Trump supporters, QAnon, and Proud Boys and, if we are still a nation of laws, they need to be held accountable for their actions.

There are pros and cons for a presidential pardon for Donald Trump.