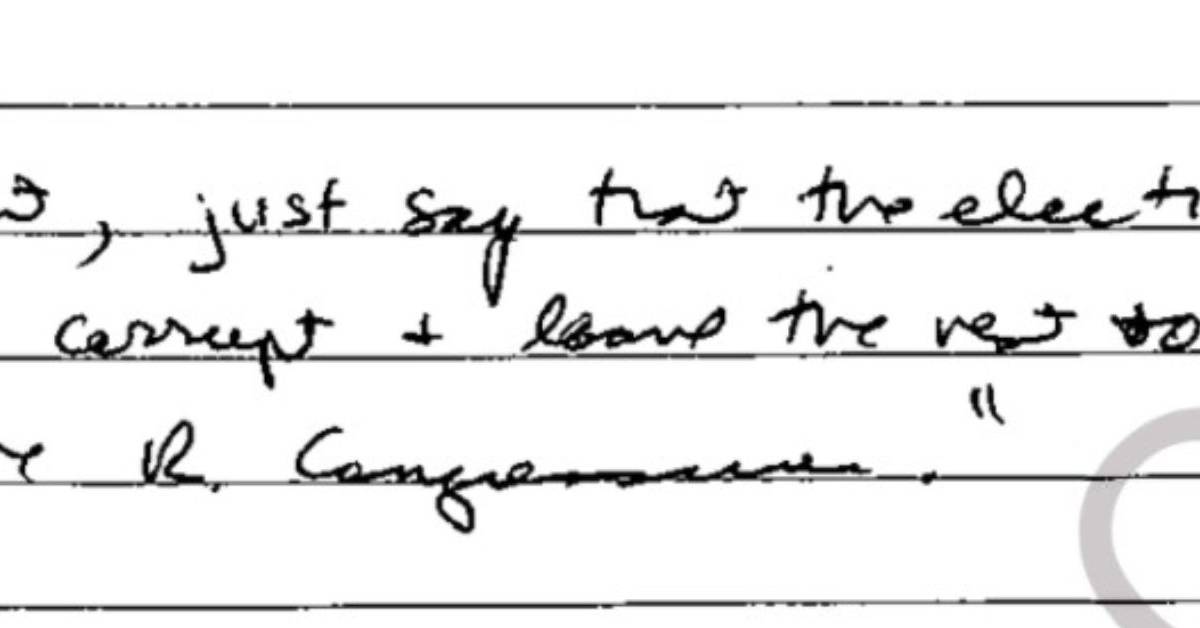 Yesterday, House investigators released notes made by Acting Deputy Attorney General Richard Donoghue during a December 27, 2020 phone call with President Trump and Acting Attorney General Jeffrey Rosen, who became head of the DOJ after the resignation of Bill Barr. The notes provide a smoking gun that President Trump pressured the DOJ, not to investigate possible fraud in the election, but to simply agree without evidence that the election was corrupt. (A PDF of the nine pages of handwritten notes can be viewed here.)

Donoghue’s notes record the president instructing the DOJ to “Just say that the election was corrupt + leave the rest to me and the R. Congressmen.”

Taken in total, the handwritten scrawl memorializes a conversation in which the president launched into a diatribe of conspiracy theories about the state with close electoral outcomes and reamed out the DOJ for not providing the same take on the investigation as conspiracy websites.

“You guys are not following the internet the way I do,” Donoghue’s notes quote the president.

To their credit, Rosen and Donoghue pushed back, telling the president, “We are doing our job. Much of the info you’re getting is false [emphasis in the original].”

The pair went on to correct Trump on the counting error rate in Michigan (0.0063 percent rather than 68 percent) and that there were no suitcases of ballots in Georgia, among other items.

Trump responded by saying, “We have to tell the people that this was a corrupt, illegal election.”

He also added an implicit threat, saying, “People tell me Jeff Clark is great and I should put him in.”

Jeffrey Clark was an assistant attorney general at the time. It was reported in January that Trump had met with Clark, who was more sympathetic to the president’s efforts to paint the election as corrupt and overturn the results, to discuss possibly replacing AAG Rosen.

The phone call ended with President Trump praising Senator Ron Johnson (R-Wisc.) for “getting to the bottom of things” and reiterating many of the same conspiracy theories that Rosen and Donoghue had just refuted.

“The people who [are] saying the election isn’t corrupt are corrupt,” Trump said.

I’ve had many Trump supporters tell me that Donald Trump was not trying to overturn the election and that January 6 was not about overthrowing the constitutional order. Donoghue’s notes are compelling evidence to the contrary and it is entirely possible that will be corroborated with recordings.

The notes paint a picture of a president who was out of control and basing his information on unverified internet allegations rather than the facts gathered by the DOJ. If you followed the first three years of Donald Trump’s presidency closely, this picture is not surprising. It’s nothing new and it might never have come to light without the congressional inquiry.

What is new and disturbing is the lengths that Trump was willing to go to pressure Justice Department officials to join in his paranoid delusions. While it’s likely that this sort of thing happened at other times during the Trump Administration, the stone walls erected by Sessions, Barr, McConnell, and others meant that there was little hard evidence to show the inner workings of the Trump White House. We had anecdotal evidence of Trump’s interference with the DOJ Russia investigation and holding the Ukraine aid package hostage, but because DOJ and White House agencies were in the hands of Trump’s allies, written evidence was hard to come by as congressional subpoenas were ignored.

That is changing now. The Biden Administration has little interest in helping to cover up Donald Trump’s abuses of power (and potential crimes). The Biden White House is unlikely to exert executive privilege over matters like Trump’s attempts to throw out election results and the DOJ has already cleared the way for former Trump officials to testify about January 6. Even Trump’s tax returns, which are required by law to be released to Congress and were the subject of two Supreme Court cases, are finally being given up by the IRS. The stone walls are falling.

As to politicizing the investigation, it would be difficult for Democrats to make the investigation more political than Republicans have already done. It is understandable why Republicans didn’t want the January 6 commission. The skeletons from the Trump Administration’s closets are embarrassing and possibly incriminating. This is especially true since the party is still fixated on Donald Trump as its messiah and very few sitting Republicans have not been tainted by the former president.

But I’ll say it again: Sunlight is the best disinfectant. And hiding Republican corruption from the light of day may be a good short-term course for the GOP, but it isn’t good for the country in the long term.

The best course for the country is to expose the Trumpian abuses of power and just how close we came to having a president use the government to try to steal an election. In all likelihood, government intervention to overturn the election results would have precipitated widespread violence or possibly a civil war. People like Rosen, Donoghue, and even Bill Barr who held the line against Trump’s demands deserve credit, but those who were willing to toss out the will of the people because they didn’t like the result should be exposed and face consequences for their actions.

And that’s where the January 6 commission comes in. These unethical actions might not fit the criminal code. For example, we know that Donald Trump, Mo Brooks, and others encouraged the crowd to March on the Capitol to disrupt the Electoral College proceedings and persuade Vice President Pence to “send it back,” something he had no authority to do. These exhortations may not reach the legal bar of incitement, but they were clearly wrong and clearly contributed directly to insurrection.

It may be that the January 6 commission unearths enough evidence to charge some members of the Trump Administration and/or Congress with criminal acts in connection with the events of January 6. The congressional investigation will pursue threads and uncover evidence that would not be applicable to criminal investigations of individual rioters or accessible to law enforcement. Evidence like the notes of Acting Deputy Attorney General Richard Donoghue.

But even if their actions are not prosecutable or don’t reach the level of criminal conduct, Americans deserve to know what was going on behind closed doors in the White House and halls of government last winter. We deserve to know who risked their career to hold the line against Trump and defend the Constitution. We need to know who was ready to toss out the Constitution and pledge loyalty to Donald Trump.

Donoghue’s notes won’t be the last bomb to drop on the Trump Administration and Republicans. The damage that the investigation will do to the Republican Party makes it easy to understand why Republicans wanted to cover up Trump’s activities and pretend the attack on the Capitol was no big deal.

But as each successive revelation about Donald Trump’s attempted coup hits the presses, it will be increasingly obvious why the congressional investigation was vital. It won’t be easy to hear, especially if you’re a Republican, but it will be information that we as a country need to hear.

Erick Erickson recently pointed out that January 6 was not the first time that the Capitol had been under attack. One of the incidents that he cited was the 1983 bombing of the Capitol by a communist group. Personally, I don’t think that comparing the MAGA insurrection to a communist bombing is as mitigating as Erickson and others seem to think it is. This is in no small part due to the fact that no sitting president has even instigated an attack on the Capitol in order to subvert the peaceful transfer of power. This was a very big deal and unprecedented in our history.

And with all due respect to Erick Erickson and others who deny that January 6 was an insurrection, the January 6 events meet the definition of the word “insurrection” as “an act or instance of revolting against civil authority or an established government” with the synonyms “revolt,” “uprising,” and “rebellion.” What part of that does not sound like January 6?